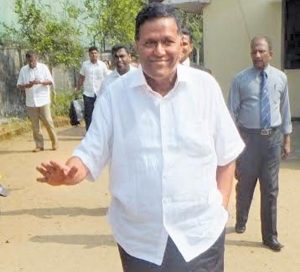 Businessman Thirukumar Nadesan, the husband of Former Deputy Minister Nirupama Rajapaksa, today denied the allegations raised in the Pandora Papers and insisted that he and his wife are innocent.

In a letter to President Gotabaya Rajapaksa, Nadesan said that his name and that of his wife have been referred to as having various accounts/assets, off-shore.

Nadesan requested the President to appoint an independent investigator (preferably a retired appellate Judge) to investigate the allegations without delay so that his name and that of his wife would be cleared.

President Gotabaya Rajapaksa has already instructed the Bribery Commission to investigate the allegations in the Pandora Papers.

Media Minister Dullas Alahapperuma said that the President instructed the Bribery Commission today to submit a report in a month.

The Media Minister said that the matter was also discussed at the Cabinet meeting yesterday.