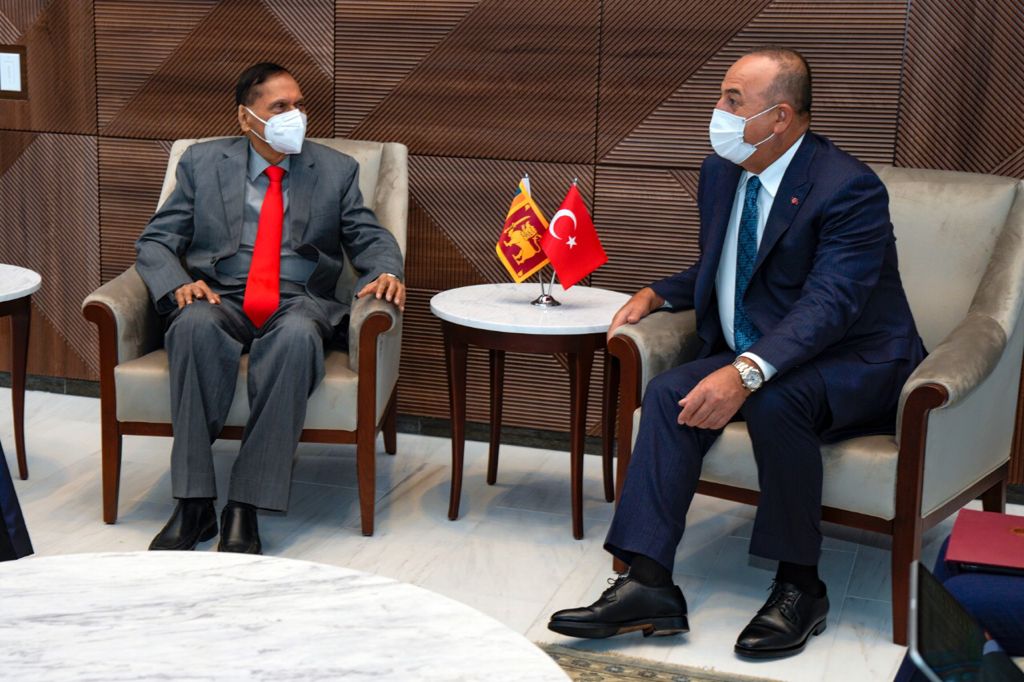 Sri Lanka and Turkey have expressed the need to confront terrorism in all its forms as well as linkages to the rise of extremism, the Foreign Ministry said today.

Foreign Minister of Turkey Mevlüt Çavuşoğlu received Foreign Minister of Sri Lanka Prof. G.L. Peiris at the Turkish House, the Chancery building of the Turkish Permanent Mission in New York for a bilateral meeting between the two sides, on the side lines of the 76th Session of the United Nations General Assembly.

In evaluating their mutual visits, the two Foreign Ministers noted that it would be an opportune time to enhance further contacts by visits and interactions at other levels, to strengthen the excellent ties of friendship between the two countries, particularly economic and trade ties. Foreign Minister Çavuşoğlu noted that despite the two countries being geographically far, the ties between the two were very close. Foreign Minister Peiris noted the generous assistance given to Sri Lanka from Turkey during the COVID-19 pandemic with the provision of ventilators and other equipment and appreciated that Turkey had also extended support in the aftermath of the Tsunami where housing was provided. The Ministers appreciated that bilateral trade between the two had steadily increased from US 100 Million and was projected to reach US 200 million in the year.

Foreign Minister Peiris highlighted that there was a need for Sri Lankan exports to Turkey to diversify from its 80% consisting of tea and noted that there was tremendous protentional between the two countries to boost economic, trade and investment in growth areas such as construction and the pharmaceutical industries, where Turkey had expertise and Sri Lanka was looking at developing this area by having specific economic free zones for the manufacture of pharmaceuticals for the local market and beyond. The Turkish Foreign Minister underscored that the Turkish construction sector was the world’s second largest and that they had a number of projects globally and not just in their region. The two Ministers expressed interest to finalise important agreements on Avoidance of Double Taxation and on Investment Promotion and Protection, that could serve to provide opportunities for joint projects, investments and initiatives between both countries. The Foreign Minister of Turkey noted their experience of successful Private to Public Projects for infrastructure, such as Turkey’s second international airport that would boost their role as an important global international hub.

The two Ministers also discussed enhancing people to people contact, including possibilities of exploring air connectivity between Ankara and Colombo and code-share flights to the region that could boost linkages and ties to new levels, including exchanges between the respective Chambers of Commerce and business sectors. Both sides undertook to expedite respective agreements that had been finalized and were at the last stages of implementation.

Foreign Minister Peiris expressed condolences on the death of two Turkish nationals in Sri Lanka from the Easter Sunday terrorist attacks and gave an update on the investigations underway and the legal processes under way to try those that were involved that had linkages to extreme groups. The two Ministers expressed the need to confront terrorism in all its forms as well as linkages to the rise of extremism and spoke against the politicization of human rights and selective use of human rights as tools by some parties, and pledged to expand international cooperation in the United Nations and other fora.

The two Ministers looked forward to expand the friendly and close ties and expressed hope that further interaction may commence in the aftermath of the covid pandemic. (Colombo Gazette)