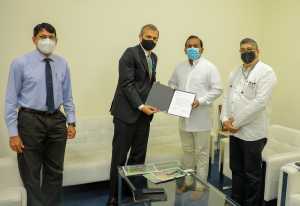 The newly appointed Representative of the Food and Agriculture Organization of the United Nations (FAO) for Sri Lanka and Maldives Vimlendra Sharan said that he looks forward to deepening the partnership with Sri Lanka.

Sharan said this after presenting his credentials to Foreign Minister Dinesh Gunawardena.

Speaking following the presenting of credentials Sharan stated that he was both, honoured and humbled to have been given this opportunity to work for the people of Sri Lanka, especially the smallholder farmers in rural areas.

“I look forward to deepening our partnership with Government Agencies and other stakeholders working in the food and agriculture sector,” he said.

Sharan also called on the Minister of Agriculture Mahindananda Aluthgamage. The FAO Representative reiterated the Organization’s commitment to support the people of Sri Lanka through the transformation to more sustainable, efficient, inclusive and resilient agri-food systems for better production, better nutrition, a better environment and a better life.

Prior to his appointment as the FAO Representative for Sri Lanka and the Maldives, Sharan served as the Director of the FAO Liaison Office for North America in Washington DC, United States of America.

Sharan brings with him nearly three decades of national and international government leadership experience focusing on rural development, agriculture and food security issues. As a member of the Indian Administrative Service, he has worked with the Indian Government extensively in rural and tribal areas of Maharashtra and has also been actively involved in agriculture and food policy formulation at the Ministry of Agriculture.

Sharan was the Permanent Representative of India to the Rome based UN Agencies; FAO, World Food Programme (WFP) and International Fund for Agricultural Development (IFAD) from 2013 to 2016.

A national of India, Vimlendra Sharan holds a Bachelor of Arts in Economics from St Stephen’s College in India, and a Master of Business Administration in Public Service from the University of Birmingham in the United Kingdom. (Colombo Gazette)