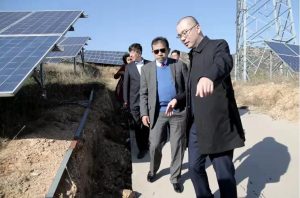 The Sri Lankan Embassy in China said that China National Energy Engineering and Construction Company Limited (CNEE) has offered to invest USD 800 million on the projects in Sri Lanka.

The Ambassador of Sri Lanka to China Dr. Kohona visited the massive KE Electric plant in Shijuazhuang producing a range of equipment for the generation and distribution of electricity.

He was hosted by the Chairman of KE Electric, Chengsuo Zhang together with the Senior Management Team and was given a comprehensive tour of the establishment. Of particular interest was the equipment produced to generate and distribute electricity produced from solar.

Dr. Kohona explained the Government policy to produce 70% of Sri Lanka’s electricity needs from renewable sources by 2030. He also touched upon the locations being made available by the Government for the purpose. He emphasised that the Government was looking for investors and will not take loans to finance any projects. The CINEE, which had already done some preliminary work on potential locations together with the KE Electric, was in the process of preparing its proposals.

Subsequently, the Sri Lankan team was taken on a tour of an impressive solar installation, Hongji PV Plant Project and Solar Demonstrative Project, in Beizhuang in Pingshan County of Shijiazhuang. Barren hillsides were covered with solar panels.

A nearby village, which had witnessed devastation during the war against the Japanese, was now prospering from this novel source of income.