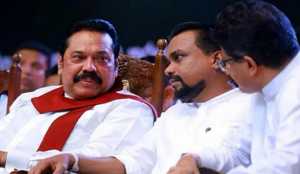 Irony but true. It takes only a week or even less to make a strong government with a two-thirds majority in Parliament, look weak, unsteady and unstable. It takes even less time to sow seeds of confusion, if not outright dissension, in the ranks of the Opposition, which may not be that strong but was not lacking in relative stability compared to many others in the past.

In a way, it has begun now with the ruling SLPP demanding the resignation of PHU ally’s Energy Minister Udaya Gammanpilla to quit, taking the blame for the mid-night price-hike of petroleum fuel. Looked at it differently, it may be the culmination of the instability, mischievously injected into the body politic, particularly the ruling SLPP with Minister Udaya joining fellow-traveller, Wimal Weerawansa, demanding that Prime Minister Mahinda Rajapaksa should shed party leadership in favour of brother and President, Gotabaya R.

If someone thought that the earlier row had died down after Mahinda smugly indicated that those that wanted the change should feel bold to attend the SLPP meeting and say so in public. The reference was to Minister Wimal, who had stayed away from a scheduled meeting. That was a few weeks back, and everyone thought it was all in the past. But not all, it now seems.

Ironically at the time, outside of the SLPP structures, the party was drawing the line, saying SLPP was a party and alliance partners like Ministers Weerawansa, Gammanpilla and Vasudeva Nanayakara (without actually naming all of them) had no business to comment on the internal affairs of the party. Therein lies the glitch. Even alliance partners do not know where the like of SLPP as a party ends and the SLPP alliance begins.

It is obvious that SLPP general Secretary Sagara Kariyawasam would not have issued a written statement on the party’s letter-head on his own steam. No. Either he had the blessings of President Gota or PM Mahinda, or both.

Also, as Minister Gammanpilla has since clarified at a news conference, decisions on fuel price rise are not taken by the minister on his own. He at best produces a Cabinet paper. The decision is taken collectively, with the President and the Prime Minister, who is also his own Finance Minister, present.

As conventions go, all Cabinet decisions are deemed to have been taken unanimously. Or, at least, it is all the ‘collective responsibility’ of the Cabinet, or at least the sub-committee that looked into the matter, in which again both the President and Prime Ministers are members. Why then single out Gammanpilla, or anyone else in his place? Is it a signal for him to quit rather than being sacked? Or, is it an indirect warning for all trouble-makers in the ruling combine to shut up, behave and fall in line?

But then, it was all written into the script when President Gota announced his Cabinet. It was a case of tail wagging the dog. Minor allies like Weerawansa, Gammanpilla, et al, got important portfolios under their care, that too after the Rajapaksas, especially Mahinda, had ensured their electoral victories to begin with. From among them, Foreign Minister Dinesh Gunawardena alone seemed to have grown up with the position, though on issues of the UNHRC count, he was only mouthing what the government leadership wanted – but he presented it with an air of conviction, all the same.

Critics of the SLPP are already claiming that general secretary Kariyawasam was targeting another of the Rajapaksa brothers, namely, Basil R, who is the only one who is not in the government at present. If it is so, it is not just about petrol price and Gammanpilla, or even the         demand for Gota becoming SLPP leader. Something is really rotten in the State of Denmark, to borrow a Shakespearean phrase!

That much become clearer when again over the last few days, a report appeared than Sports Minister Namal Rajapaksa was going to replace his father, the Prime Minister. Some reports even claimed that Mahinda wanted to step down. Others said, he wanted to step down and make Namal the PM.

But the party was quick to end speculation of the kind. It said there was no question of Mahinda laying down office, and/or Namal taking his place. But then this is the second time that someone or the other is talking about Mahinda having to quit the party position first, and the governmental office, now.

The question is this: Who is targeting Mahinda, the single-largest vote-getter not only for the SLPP and the Rajapaksas, but also from among all political parties and alliances in the country? If it is an insider’s job, whosever be behind it, do the plotters think that they could bring all those ‘Mahinda votes’ to the party without Mahinda?

If it is an outside plotter, who is it, why is it and how is it that they are able to get away with it all, time and again – often standing in the name of a recognisable face – and not just a social media campaign from a fake id, possibly also from outside the country, as has been the case on most occasions?

As coincidence would have it, Gammanpilla’s one-time boss, JHU’s Champika Ranawaka, too, suddenly seems to be more uncomfortable in the Opposition SJB camp than already, over the past one-year plus. He had hoped to become the Opposition’s presidential nominee, then the prime ministerial candidate, but did not get either.

It is anybody’s guess how he could aspire to be one without belonging to the main UNP/SJB Opposition? He was not a Mithripala Sirisena of circa 2015. Sirisena’s choice was meant to be a shock-treatment, which actually produced results. As the local government polls of 2018 showed, Sirisena-led SLFP-UPFA combine still polled 13 per cent vote-share. Champika could not have hoped for it then, he cannot hope for it now, or ever.

It is thus that Champika’s recent statement that the SJB’s future will depend on Sajith’s behaviour causes eyebrows to raise. Is it that he is concerned about the continued demoralisation of the SJB cadres and second-line? Or, is he also hinting at his taking a third shot at the leadership, and has served an open notice to Sajith?

But then Sajith is a past-master at serving such notices on his one-time boss in the undivided UNP, Ranil Wickremesinghe – only to play a Robert Bruce until he actually made it one last time. He may not be the one wanting to lose, or will lose, either.

And the SUB row about Sajith Premadasa’s ability to lead the Opposition comes at a time when the UNP parent at long last announced that party boss and three-time Prime Minister, Ranil Wickremesinghe, would fill the lone National List seat in Parliament, which alone the party              got in an election that all but the Election Commission and the UNP seem to have forgotten. The more recent announcement that Ranil will take oath as parliamentarian on 22 June has been accompanied by reports that sooner than later, he would replace Sajith and the Leader of the Opposition.

As supporters and sympathisers, and those that yet respect decency in public life have pointed out, it was the unkindest cut as Sajith was still in self-quarantine for 14 days when all those rumours began doing the round. So much so, the SJB parliamentary group had to meet urgently to pass a resolution that Sajith, and none else, is their leader. Ironically, Champika, according to news reports, moved the resolution in this regard.

Critics seem to feel that Ranil will make a better Leader of the Opposition than Sajith. Maybe, yes, may be not…. But then until he was sure that there was a fighting chance, Wickremesinghe did not exert himself overmuch. Why then, give that chance to Sajith, too, who too see no easy way out of the Rajapaksas’ vice grip of electoral politics, just now.

Anyway, as the wag used to quip when Ranil was the Leader of the Opposition for ten years under President Mahinda (2005-15), if the former wanted a scoop if ice cream at the middle of night and found none in his refrigerator, he only had to wake up the President at that hour, and tell him what he wanted ice cream, with a pass-word of sorts.

As the story goes, Mahinda would have ensured that Ranil got buckets full of ice cream, of all flavours, lest the latter should carry out his threat. And Ranil’s threat? “If I don’t get my scoop of ice cream now, I would quit as Leader of the Opposition, first thing in the morning.” Amen!