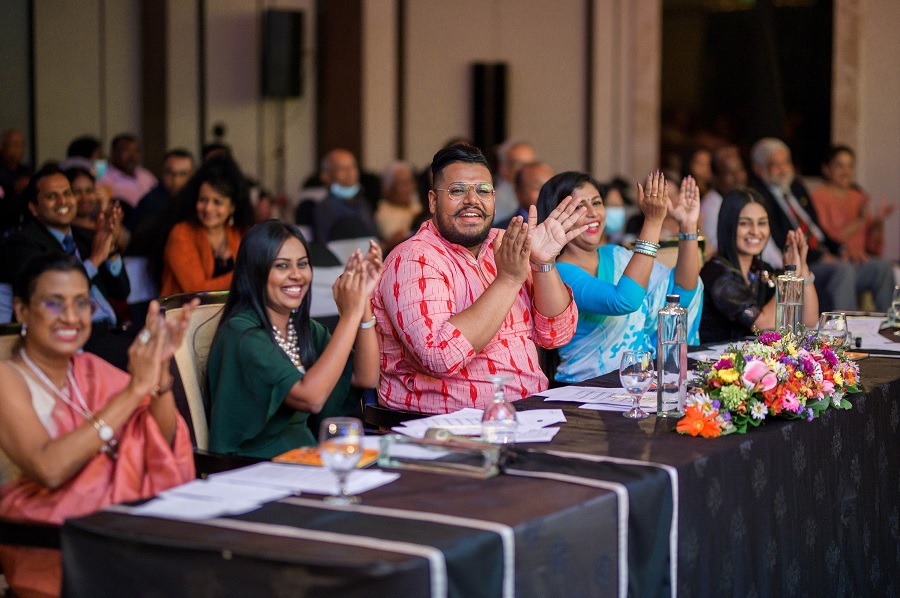 The event was attended by the Minister of Education Dr Susil Premajayantha, Rotary district governor Pubudu De Zoysa, other Rotarians, children, teachers and parents from around the country.

This project was initiated by the Rotary Club of Colombo Metropolitan and over the past five years expanded as a project that has been adopted by all clubs across the Rotary 3220 District. Rotary believes that inculcating good ethics and values in children at a young age would bring about a positive change in the country in the next generation.  Little Minds Strong Values’, uses 30 such Sinhala/Tamil songs with simple music/lyrics and eye-catching video animation to promote positive ideas and attitudes in children from a young age, building and shaping the citizens of the future. The famous idiom “Puhul Hora Karen Dane” is turned into a song with a powerful message to the children “Hora karanna epa”, “boru kiyanna epa”, and similarly all songs have powerful messages and embedded values in them.

It was a challenge for the judges to select the winners and runners-up since every performance was simply outstanding.

Winners of the event:

LMSV is a brainchild of Rukshan Perera, Project Chairman, of the Rotary Club of Colombo Metropolitan, speaking about the event he stated, “I am thrilled and so very proud of all the children that have participated in this competition. It gives me a feeling of happiness to see how well the children have adapted these songs with good values and perform creative acts to express the embedded values. Over five years we have created more than 50 such Honda Purudu values taught in these songs full of moral resonance, advising children on the best way to conduct themselves in the situations of life with values and manners – respect other religions and races, respect parents and elders, be kind to others, be honest, don’t steal, don’t lie, say sorry, say thank you, preserve the environment, dispose of garbage responsibly, don’t take or give bribes, follow the law, follow road rules, stay healthy…etc. and hope these values will be seen in future generations”

In 2022 with the help of the Ministry of Education, the program has been rolled out to 10,000 government schools around the country and has received national attention with schools already performing these songs at school events to promote values in children and their communities.

Speaking about the event Dilini Hennayake, President of The Rotary Club of Colombo Metropolitan said, “I need to thank Rukshan, the Rotaractors and his team behind  LMSV for bringing the project to its third phase with the national competition ‘Rotary Honda Purudu Champions’ to further encourage the children to learn the songs/values with handsome awards for winners.  It was heartening to see how much effort the teachers and children had gone into creating fantastic performances. In particular, the props and costumes used by the schools were amazing. There was a school from Gampaha that danced to the song ‘Gas Kolang’, and brought a 20 feet long 8 feet high solid backdrop that stood behind the act with a real swing fitted made to look like it was hanging on a tree where a child was swinging back and forth in real-time. We do have very talented youth and I see great positivity for our country.”

Those interested in this program can watch the original song videos or children’s live performances on WWW.LMSV.LK.  Help your child learn these values while enjoying these songs.

What we learn in our formative years shapes our beliefs and influences our adult actions. This project is not only a non-profit motivated gift of skill, dedication and effort, but a direct investment in the future of the country, and will bear fruit which blesses the whole nation in the years to come, with the peace and integrity we all long for, and work towards.