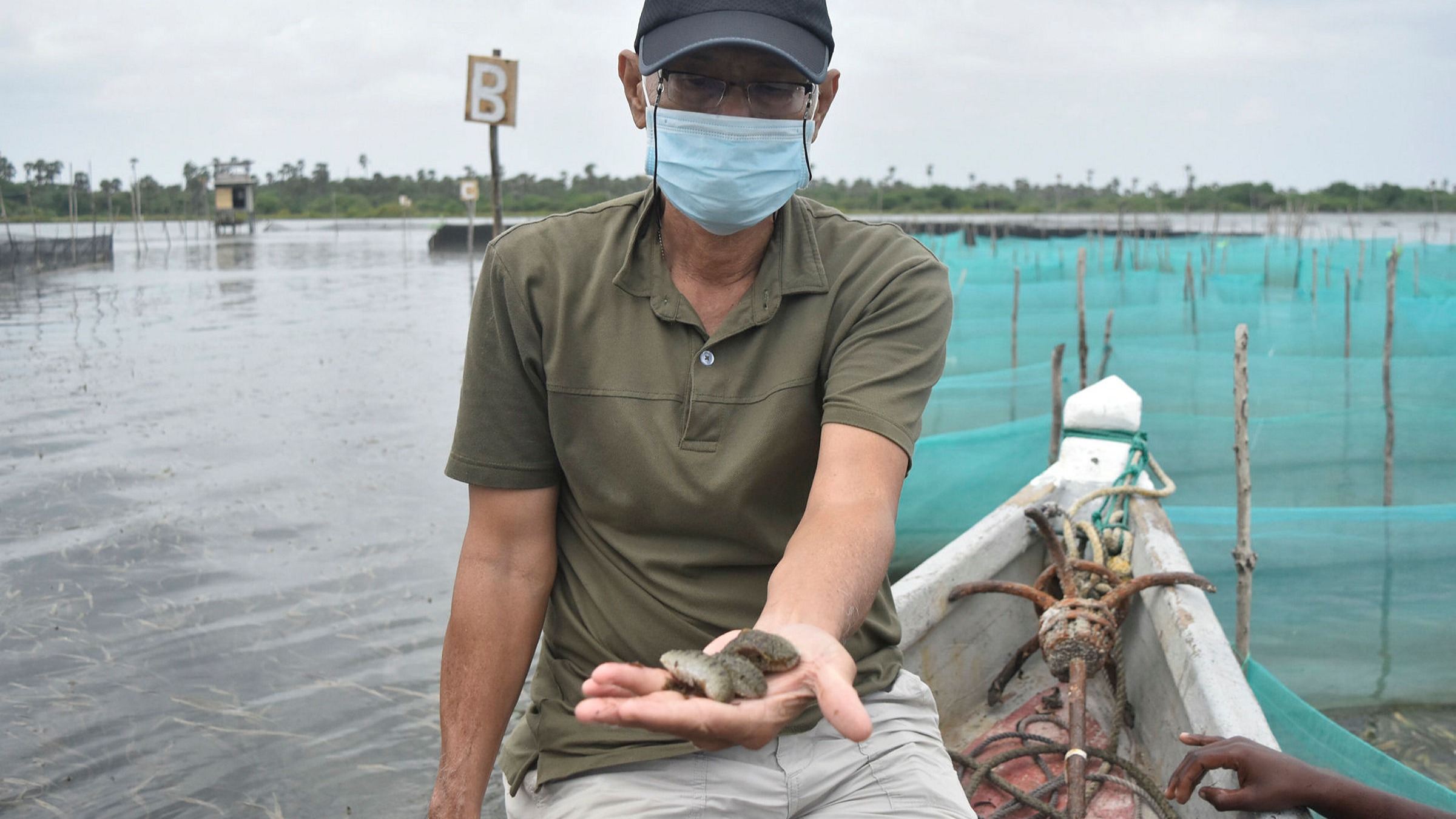 According to an article published by Daily Mirror, in 2020 alone, Sri Lanka has exported about 326 tons of sea urchins with China being the biggest buyer.[i] Going back as far as 2016, a sea leech hatchery was established by a Chinese joint venture company ‘Gui Lan (Pvt) Ltd’ centered on the northern peninsula to facilitate the export of these species to China. The company has been registered as a private limited liability company with a registered address in Negombo with two Chinese and a Sri Lankan being named as directors in April 2016. Welcoming Chinese investment in the country, in June 2022, the Sri Lankan cabinet approved a proposal for a large-scale commercial sea leech and sea cucumber farming project spanning 5,000 acres in the districts of Jaffna, Mannar, Kilinochchi and Batticaloa in the Northern and Eastern Provinces.  The government also plans to set up an export village in an area of 100 acres.

While the Sri Lankan government is busy counting the money, the local fishermen communities have been suffering. It has come to light that the Gui Lan joint venture has failed to secure a permit from National Aquaculture Development Authority of Sri Lanka (NAQDA) for its new nursery in Kowtharimunai in Pooneryin. This new nursery is located only a few kilometers away from its Ariyalai hatchery in Jaffna. According to the chief of Pasaiyoor Fishermen Federation P. Mathan, the establishment of this new nursery has led to acres of sea lands being fenced off for sea cucumber harvesting, shutting out the traditional fishermen who harvest prawns for a living. While the company continued its operations at Ariyalai, the Fisheries department in 2017 filed a legal action against it for failing to produce a permit from NAQDA. The case was then transferred to Jaffna Magistrate’s court where it was ordered to release the baby sea cucumbers to the nearby waterways. Pooneryin Divisional secretary S.C. Krishnendran said he came to know about the company’s Kowtharimunai extension only through media reports and that no such permit applications were submitted to the local fishermen body seeking its consent.

The laid-back attitude of the authorities resulted in no proper action has been taken yet. About 3,200 small-scale fishing families have been seriously affected by the creation of sea leech farms, losing their livelihoods during an ongoing economic crisis in the country. A group of fishermen has also started a hunger strike near the Kiranchi fishing harbor because the roads leading to their boats for fishing activities has been blocked due to the permission of a group of fishermen to set up sea leech cultivation boxes. The fishermen point out that if out of 100 fishermen even just 10 set up a sea leech farm, the livelihood of the remaining 90 who catch shrimp, prawns and other fishes is put at stake. Out of the 17,000 fishing families living in the Northern Province, less than 1000 have been selected to work in these farms, leaving the remaining 16,000 Dhiwara families at risk of losing their livelihood and falling into the streets. This has led to continuous protests demanding the closure of the illegal sea leech farms in Punagari, Kirawan and Ilavankuda areas.

The effect of these farms on the marine diversity and ecology has been grave. The lights aimed at the sea urchin production farms across the lagoon are switched on in the evening which affect the movement of fish and prawn towards the shore. These organisms live near the coast or move towards the sea depending on the salinity of the waters. Chinese companies like Gui Lan have constructed several sea cucumber farms with electric fences along the sea shore, restricting the movement of other aquatic species towards the coast during monsoon season. This malevolent practice could pose a serious threat to the long-term sustainability of the region. Sea cucumbers help detoxify contaminants in the soil and other environments, help in nutrient cycling and redistribution of sediments. Moreover, they help other species such as corals to live, making them ideal for bioremediation.

Sea cucumbers (Holothuroidea) and sea urchin (Echinoidea) along with starfish are invertebrates that belong to a larger animal group called Echinoderms. These spiny-skinned spineless creatures live on the seabed and can be easily found in oceans around the world. Sea cucumbers have a long, barrel shaped body with soft, leathery skin while sea urchins are on the rounder side with spikes to protect it from the predators. Both of these echinoderms are consumed around the globe as food as well as medicine.

Sea cucumber, which is known as Muhudu Pipinna in Sri Lanka, is found along its Northwestern and Eastern coasts. Traditionally, these creatures have been harvested using wooden vallam and siraku valai, a passive type of fishing gear which is set up in night and harvested the following morning. This method has been popular in shallow waters and near shore areas. Another traditional method is patti valai, which is used to harvest fish and prawn using square-shaped nets. In addition, sea cucumbers are easily picked up by divers, who dive from traditional oru, a type of canoe or even motorized boats.

However, these methods are now disappearing due to the proliferation of large sea cucumber farms. The Ministry of Fisheries leases out sea land plots ranging between one to ten acres on the seashore. The largest fish breeding sites are located near shallow coastal lands due to favorable marine environment including sunlight and sea plants. While all these factors make Sri Lanka a suitable place for sea cucumber farming, large scale production could prove to be catastrophic. These areas are usually surrounded by thick electric fences keeping in line with the pen culture method. About 4000 sea cucumbers can be bred at one time in one acre of area. In a sea cucumber hatchery, the baby animals are nursed up to four months before they are sold to commercial farms run by locals. These babies then take at least ten months to mature and ready for export.

Considered a delicacy in China, sea cucumbers are often served during banquets and dinners. In addition, sea cucumbers are used in traditional Chinese medicine (TCM) to cure impotence, joint pain etc., enhance sports performance and is known to have anti-fatigue effects. All these factors have made sea cucumbers one of the most expensive seafood item that already has a huge market available for business. The demand of sea cucumber has been on the rise which has led to construction of massive farms along the Lankan coastline. Reportedly, the sea cucumber farm established by Chinese companies have led to loss of livelihood of close to 15000 Sri Lankan fishermen families. Reports of protests from these families state that the traditional fishing grounds and marine diversity are being destroyed and are leading to poverty and unemployment.

If the Sri Lankan government wants to tackle the problem and work to improve the living condition of the fishing community, then it can be achieved only through right technology and clean investments from local entrepreneurs. Handing over the coastline to Chinese domination will only bring disaster to the humans as well as the environment.