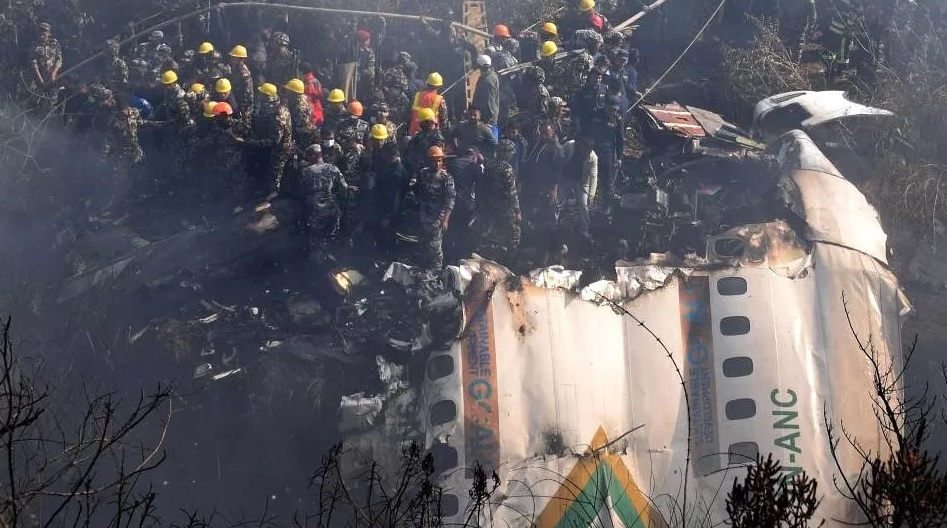 Nepalis are observing a day of mourning for victims of the country’s worst air disaster for some three decades.

At least 68 people died when a flight from Kathmandu to the tourist town of Pokhara crashed and caught fire on Sunday morning.

It is unclear what caused the crash, but Nepal has a tragic history of fatal airline accidents.

A search and rescue operation that involved hundreds of Nepalese soldiers was suspended overnight due to darkness but is due to resume on Monday morning.

Earlier, local TV reports showed rescuers scrambling around charred sections of the aircraft which hit the ground in the gorge of the Seti River, just over a kilometre from the airport.

Most of the 72 passengers and crew died, but there were unconfirmed reports that several people had survived, although critically injured.

The prime minister of Nepal declared Monday a national day of mourning, and the government set up a panel to investigate the cause of the disaster.

Local resident Divya Dhakal told the BBC how she rushed to the crash site after seeing the aircraft plunge from the sky shortly after 11:00am local time (05:15 GMT).

“By the time I was there the crash site was already crowded. There was huge smoke coming from the flames of the plane. And then helicopters came over in no time,” she said.

“The pilot tried his best to not hit civilisation or any home,” she added. “There was a small space right beside the Seti River and the flight hit the ground in that small space.”

Aviation accidents are not uncommon in Nepal, often due to its remote runways and sudden weather changes that can make for hazardous conditions.

A lack of investment in new aircraft and poor regulation have also been blamed in the past.

The European Union has banned Nepalese airlines from its airspace over concerns about training and maintenance standards.

In May 2022 a Tara Air plane crashed in northern Nepal, killing 22 people. Four years earlier 51 people were killed when a flight travelling from Bangladesh caught fire as it landed in Kathmandu.

Chiranjibi Paudel, whose journalist brother Tribhuvan was on the flight, said action had to be taken to improve aviation safety in Nepal.

“The airlines should be penalised and the regulatory body of the government also should be held accountable,” he said.

The plane came down close to the newly built Pokhara International Airport, which only opened at the start of the year.

Travellers at the airport told the BBC they fly regularly and still feel safe after today’s news – short plane journeys are a popular way for Nepal’s middle classes to travel across the country.

“I’m not scared of flying,” said Ria who was waiting for her bags to arrive, “but there needs to be better regulations and newer aircraft.”

The Yeti Airlines flight from Kathmandu to the tourist town of Pokhara left the Nepalese capital just after 10:30 (04:45 GMT) for what should have been a short trip.

It had 68 passengers on board, including at least 15 foreign nationals, and four crew members.

Of the passengers, 53 were said to be Nepalese. There were five Indian, four Russians and two Koreans on the plane. There was also one passenger each from Ireland, Australia, Argentina and France among others.

Khum Bahadur Chhetri, a local resident, told Reuters that he was observing the flight from the roof of his home as it approached the airport.

“I saw the plane trembling, moving left and right, and then suddenly it nosedived and it went into the gorge,” added. (BBC)