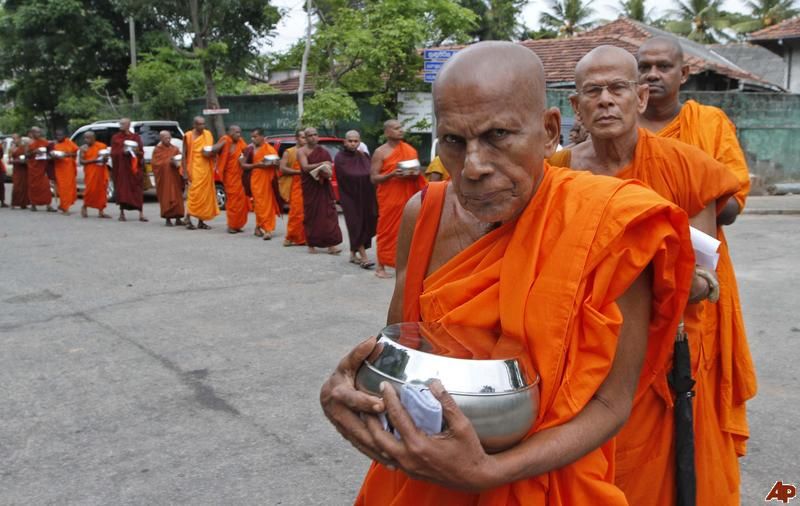 Recently, Ven Kappitiyagoda Sirivimala Thera, Anunayake of the Rajopavanaramadhipati Ramanna Nikaya of Gatambe, reportedly asked politicians to take to voluntary retirement at 60 and make way for the younger generation.

He cited a recent official circular on the matter, and President Ranil Wickremesinghe’s defence of the same and asked if doctors, engineers and other professionals should retire at 60, the same law should apply to the political class as well.

“The Prime Minister has issued a circular in this regard stating that at the age of sixty, all State employees should retire. This means that after the age of 60, people experience physical, mental, and health problems, as well as other weaknesses, so the retirement age has been set at 60 years, as recommended by doctors. How can politicians work after sixty years?” he asked at a local function. He went on to add that it was a grave injustice that only state employees have to retire at sixty.

“How can politicians work if state employees cannot?” the Thera asked. “This is an amusing fact. We, the Maha Sangha, believe that politicians in this country should voluntarily retire at the age of 60 and make opportunities available to young people who can work. Otherwise, there is no reason to stay in Parliament until you walk with a walking stick. Many people define public service as serving themselves. Because of the privileges, many do not even consider retiring from Parliament,” he said.

Parliament was the most powerful place in the country to take decisions and make laws, the Thera underlined “How can people who can’t think and whose health has deteriorated work to build a country?” he queried. “If there are academics or other people over the age of sixty, they can get their services by forming a voluntary parliamentary advisory council,” he opined.

As the Thera pointed out, “Despite claims that there is no money to do anything in the country, the number of ministers continues to grow. They are attempting to spend and sell the country’s resources to accomplish this.” He wanted all such tings to stop, and that everyone should come together and work to lift the country out of the abyss it has fallen into, even if only for a short time.

At first reading, the Thera’s proposal sounds not only interesting but also welcome. Given the nebulous public opinion that is yet to settle down after the nation-wide Aragalaya protests and the shortages that caused it, there may be many unthinking takers for the idea.

Whether it was the Rajapaksas or any other ‘corrupt’ politician at the helm, people would have continued to mind their business as always but for the sudden shock administered by shortage of food and forex and consequent price rises that too became uncontrollable. In the end, only the experienced political class that restored some sense to the madness that was unfolding in the Aragalaya’s fringes and threatened to take over the core. Because Parliament was near-united in wresting back the political and constitutional initiatives from the streets, democracy has possibly survived inn the country, to this day.

Yet, nothing explains the way protestors burnt down the homes and businesses of about 80 politicians across the country, laid siege on the President’s office, forcibly occupied the official residence of the President, and later set then Prime Minister’s personal residence afire. Waking up belatedly – or, it seemed so, then and since – the security forces stalled the protestors’ repeated attempts to take over Parliament as the seat of power, about which alone the Thera has spoken.

The Thera’s is an unsustainable argument and impractical suggestion. The youth, about whom the Thera has spoken, were at the vanguard of the Aragalaya protests, wherever held. The majority of arsonists and other violent violators belonged among them. That at least goes by the relative age-profile of the protestors that the police have since arrested for specific offences, including arson and squatting in the President’s office and residence, which in a way are national symbols.

Yes, there is a point in what the Thera has said about the old not willing to give the young their space, and preparing them to take over from them in their time. Whether coincidence or otherwise, this has increased so much under the Executive Presidential system, though it is not directly linked.

Though the Provincial Councils and provincial administrations were hoped to become the training ground for future generation leaders just as local government institutions were thought to be recruiting agencies for political parties, neither have actually led to the emergence of national-level leaders with live grassroots-level contacts and continuing connect. Instead, national leaders are born straight as such, whether or not they are born into ‘ruling families’ like the Wijewardenes, Bandaranaikes, Rajapaksas and also the Premadasas.

The list of ‘political families’ in the country is legion. The irony is as much as the majority Sinhala polity, even minority Tamil, Upcountry Tamil and Muslim polity has leaders who have grown roots and refuse to allow a second generation to grow under their guidance and care. The fact is that already the third and fourth generation are ready to come up, but have no space or encouragement. Suffice is to point out, LTTE’s Prabhakaran went as far as to physically eliminate competition, present and future.

Yet, the question remains if the oldies among our political class should be forcibly recruited. Or, if the Thera should have advised professionals that are retiring from government service to join active public life, whether as politicians or opinion-makers or influencers, so that their vast and varied experience and expertise could guide the people and force the policy-makers to do the right thing, the right way.

They could train the younger minds in the right direction, again in the right way. All of it takes time, effort and commitment – which the retirees should be prepared to offer the nation. But then, they should also give up the old ‘my-way-or-the-highway’ attitude, which is what differentiates the political class from the professionals.

The problem is that in the name of accommodation, the political class has made defection and corruption a part of their being. A near-permanent influencer group, in the place of an eruptive Aragalaya protestors, could make the actual and lasting difference. At least, there is no harm in trying.

This is where the question also arises if religion and religious leaders should get involved in politics and policy-making on a daily and hourly basis. Yes, the majority Sinhala-Buddhist clergy, starting with the prelates and the Maha Sangha are known to influence the rural voters, and hence the top politicians, in turn.

Why, all through, Buddhist monks, especially those that are in normal universities, have been constantly taking sides in political and politicised protests on campuses and outside, too. It is pertinent to note that among the few that have been detained under the otherwise dreaded Prevention of Terrorism Act (PTA), there are young men of robes, too. No one has contested it in any serious manner, as possibly the police have their video-shots while in action.

It is one thing for Buddhism being the ‘State religion’ (which itself the Tamils in particular contest vehemently) but it is another issue altogether for the Buddhist clergy to be seen as influencing political decisions, whether they are constitutional matters like ‘official religion’ and ‘official language’ or any other, where the dividing red-line between God and King have to be drawn, thick and clear. The line between Lord Spiritual and Lord Temporal, so to say, should be inviolable, and it is the former that has to ensure that they remain on the right side of the crease.

As things have unfolded since the Easter Sunday terror-attacks, the Catholic Church, especially Malcolm Cardinal Ranjith, the Archbishop of Colombo, has become both vocal and vociferous on everything politics. The issues that caused the Aragalaya protests has become a convenient tool for His Eminence to espouse his cause on multiple issues unconnected to God, religion and theosophy.

To be fair to the nation’s Muslims and their mullahs (otherwise ridiculed elsewhere in the world), it is now on record that they were the ones who had egged on their politicos and also the Government of the day about the suspicious movements and activities of Zahran & Co in the long run-up to the Easter attacks. No one wants to give them the credit that is due to either the Muslim clergy or the community at large, though there are also errant elements, especially young, who needed to be straightened up, one way or the other.

The Tamils do not have an organised religious structure, unlike in the other three communities. Whether it is the Sri Lankan Tamil (SLT) community or the Upcountry Tamils, their ‘kovils’ and their priests are not institutionalised in a way of the other three religions for them to issue sermons or fatwas or whatever to their laity.

Yes, during the LTTE days, many of the kovil priests might have sympathised with the cause and even the methods, but they could not have recruited even one cadre, militant or otherwise, even if they had desired or tried. The Hindu social structure is such that the division is very clearly laid out. Attempts by the likes of Velan Swamigal, a mutt/monastery head in the Tamil to create a new political space, has not succeeded beyond creating a few momentary ripples.

Independent of faiths and their clergy, Thomas Cardinal Wolsey’s last words in Shakespeare’s ‘Henry VIII’ should hold a candle,  prophetic, for all times and for all-comers: “Had I but served my God with half the zeal I served my King, He would not have in my age have left me naked to mine enemies…”

And thereby hangs a tale!