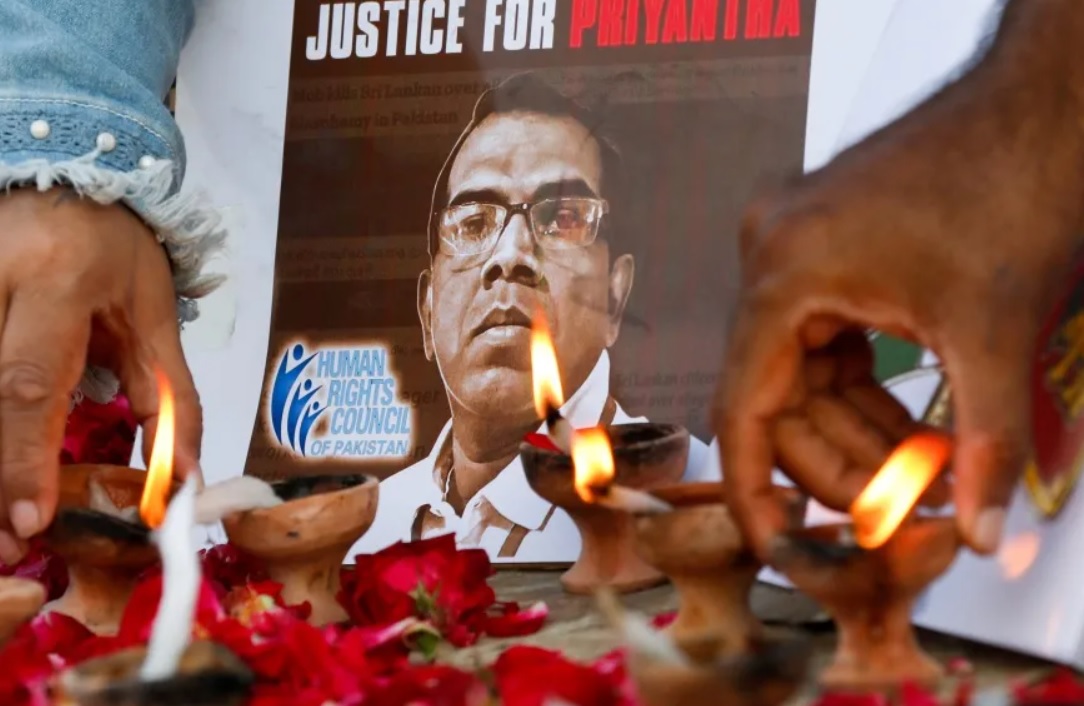 Blasphemy, in a religious context, refers to insult and contempt shown to God or something holy, or anything done showing disrespect to God. If something is contrary to the official belief or opinion of a particular religion, that will be construed as blasphemy and an unforgivable offence.

The heinous lynching of Sri Lankan engineer Priyantha Kumara in Sialkot, Punjab, Pakistan, may have been the result of an unruly mob that was misled into believing that Priyantha Kumara was insulting Islam.

The lynching shocked the entire civilized world and sent ripples of discontent through Sri Lankan society. It would be prudent to reconsider taking on assignments where fanatical religious practices predominate in contrast to the liberal outlook of civilized societies.

In the circumstances, the killing of Sri Lankan engineer Priyantha Kumara by lynching was totally intolerable to the peace-loving world at large.

Despite the passing of a year, nothing has changed concerning the fulfilment of obligations to his family living in Ganemulla without a breadwinner.

That inhumane killing not only severely affected the well-being of Priyantha’s family members but also the hearts of all law-abiding Sri Lankans because no Sri Lankan had ever faced such a predicament or inhumane cruelty overseas by an unruly, sadistic mob with barbaric tendencies.

Priyantha Kumar was killed on December 3, 2021, while working as a factory manager in Pakistan’s Sialkot district. A year has passed since the incident. Recently, his family and friends organized a charity event to give alms to the Maha Sangha (Buddhist clergy) for Priyantha Kumara to ease his journey through Samsara.

Compensation has been a broken promise

Priyantha’s wife, however, had expressed her reservations to the media about the promises that came from his employer soon after his (Priyantha’s) death. They promised Priyantha’s wife and children monthly emoluments for the next 10 years, but they were unable to fulfil their promises.

All Sri Lankans were of the belief at the time that the authorities of the factory where Priyantha worked or the government of Pakistan would pay compensation for his wife and the two school-age children for a reasonable period of time to meet their expenses in a crisis-ridden country.

Religious extremism and the law

The factory workers where Priyantha worked were allegedly involved in the killing after forming a mob of hundreds of protesters. The mob tortured him to death and then burned his body on the highway.

A rumour spread in the factory that Priyanth had blasphemed God, and he was subsequently murdered.

An organization called Tariq e Labbaik Pakistan, which had been banned in Pakistan, had taken the law into its own hands against Priyantha. This was for allegedly blaspheming God by tearing down a poster inside the factory premises.

Nonetheless, it was later revealed that Priyantha had no hand in such an act of blasphemy.

But even Priyantha’s close friends, who had worked in Pakistan for a long time, were unable to save him. Instead, many of his loyal followers had finally participated in this brutal attack against Priyantha in the name of God.

Priyantha was a person who performed his duties there for 11 years with sincerity and dedication.

The killings are said to be in accordance with Pakistan’s blasphemy laws. It has been an offence in Pakistan since the British period to disrespect religious beliefs. The punishment carries three to five years of imprisonment, depending on the gravity of the offence.

But Priyantha’s fate was not decided by a court established by the law but by an extremist group that took the law into their own hands. This was more akin to a kangaroo court where the law of the jungle was in force.

Priyantha will not be the last person to face this kind of brutality unless concerted efforts are made to halt the kangaroo court-type executions.

As reported by foreign media, it is said that these extremist laws are being applied to take personal revenge against people in some parts of Pakistan. According to media reports, these laws are used to suppress minorities, especially those who are not religious. In addition, they are used to execute people in public on the highway without a proper trial by a competent court.

After Priyantha was tortured to death near the factory, his body was set on fire. Video footage circulating on social media portrays this act of venomous brutality that shocked the civilized world.

Several foreign media outlets reported on the incident later on. It was widely denounced that such tribal incidents are still taking place in the 21st century under the guise of religious extremism.

This extremism also affects the independence of the courts and thereby deprives judges of the opportunity to make decisions without fear.

It is a well-known allegation that some extremist groups, including the world’s most powerful extremist group, the Taliban, are supported by government institutions connected to Pakistan. India continues to emphasize this, and it is India’s firm position that it will foster separatism and pose a serious threat to regional peace and world peace. Pakistan denies those accusations and is not inclined towards resolving such issues in a more transparent manner. Radical Islamic extremists continue to walk free, exposing the Pakistani government’s inability to enforce strict controls.

Within a few days of the incident, scores of people were rounded up, and 89 of them were indicted by the anti-terrorist court in Pakistan.

This incident, which is extremely repugnant, shows Pakistan’s inability to be firm with terrorism to create a better and safer world. The attack on Mumbai on November 26th, 2008, was yet another terrorist attack, which signals Pakistan must take more concrete steps to ensure that it is a stakeholder that respects human rights in a democratic world.

The Prime Minister of Pakistan at that time, Imran Khan, condemned the killing in a Twitter message. He said that “the brutal attack by a group of law enforcement officers and the burning alive of a Sri Lankan manager in a factory in Sialkot is a day of shame for Pakistan.” The Prime Minister of Pakistan had emphasized that he would personally supervise the investigation in this regard, that the maximum punishment would be meted out to all those responsible, and that the arrests would continue. Pakistan Army Chief General Qamar Javed Bajwa, who is no longer serving, also strongly condemned the incident. Calling it a “shameful incident,” the army commander also said that such acts outside of judicial proceedings are absolutely unacceptable.

48-year-old Priyantha Diyawadana, who was murdered, is the youngest in a family of six. A resident of the Ganemulla Kandaliyaddapaluwa area, he is a student at Galahitiyawa Central College, Matara Rahula, and Kelani Dharmaloka Colleges.

Priyantha Kumara Diyawadana obtained a degree in engineering from Peradeniya University in 1993.

In 2010, he joined Pakistan Crescent Textile Garment Factory as Industrial Engineering Manager, and in 2012, he joined Rajko Factory in Sialkot as General Manager. There is ample evidence that he served his employer in a very loyal manner.

Priyantha, who has been coming to Sri Lanka once or twice a year since he started working in Pakistan, last travelled to Sri Lanka in 2019. Then at the beginning of 2020, Priyantha, who was imprisoned in Pakistan due to the Corona epidemic that spread around the world, suffered this unfortunate fate after two years when he was preparing to come to this country to see his wife, his two sons, ages 14 and 9, and especially his 80-year-old mother.

Even if Imran Khan is not Prime Minister today, it is the duty of the current Pakistani authorities to fulfil the promises made to Priyantha’s family. They must combat extremism and restore law and order in the country so that people can live in peace.

Not only does such an act serve the objective, but it also serves as a tribute to Priyantha’s family and to humanity as a whole.

If extremism is not dealt with firmly, someone else will inevitably become its next victim, and the trend will continue unabated.