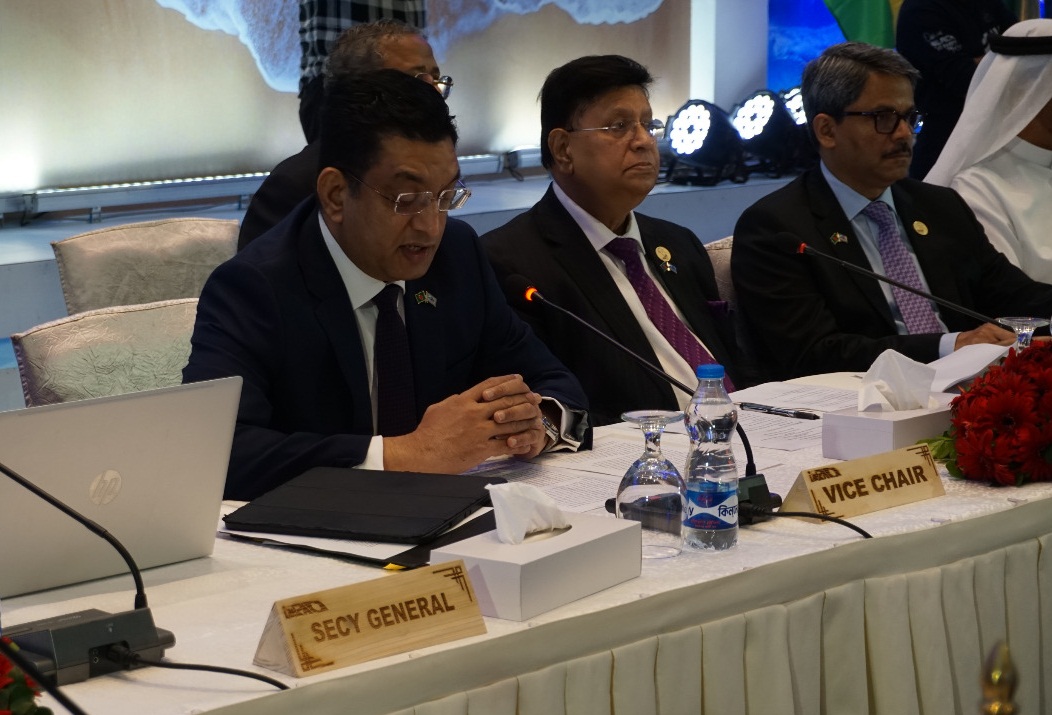 Addressing the 22nd Meeting of the Council of Ministers of the 23- member Indian Ocean Rim Association (IORA), Minister of Foreign Affairs, M.U.M. Ali Sabry, underscored the significance and necessity of actively engaging with the countries of the Indian Ocean Rim to mutually advance economic and commercial interests of Sri Lanka as well as to maintain peace and stability in the region of Indian Ocean.

He further stressed that Sri Lanka’s commitment for the matters that concern the Indian Ocean region remain as one of the key cornerstones of current economic and foreign policy of Sri Lanka.

Recalling the historical background on trade and commerce as well as connectivity in the Indian Ocean region, the Minister highlighted that Sri Lanka is strategically positioned at the centre of one of the busiest sea lanes of the world.

He also added that Sri Lanka’s traditional and ancient links with the countries of the Indian Ocean Rim Association go back to many centuries and empirical evidence reveals that Sri Lanka’s geographical centrality markedly facilitated and aided maritime commerce and trade over the centuries.

The Minister articulated that Sri Lanka has demonstrated manifestly significant openness to trade and commerce and, today, Sri Lanka is poised and is well positioned to be one of the major trading hubs of the Indian Ocean. Given the progression as an Indian Ocean Hub, Sri Lanka has emerged as one of the most pivotal shipping lanes since two-thirds of the petroleum products and half of the container shipments of the world criss-cross close to the Southern coast of the Island.

The Minister apprised the member states at the Council of Ministers of the IORA with regard to Sri Lanka’s efforts in sustainable and efficacious usage of maritime resources and immense ocean pollution challenges as well as projects and programs implemented to safeguard the coastal belt and the Indian Ocean. This is in order to maintain pollution free and cleaner Indian Ocean following the MV X-Press Pearl calamity of last year and emphasised the necessity for countries to work in a concerted manner in addressing ocean pollution, especially during maritime disasters.

Highlighting Sri Lanka’s interests in the IORA and the region, as well as Sri Lanka’s active role in the organisation as the current Vice Chair of IORA, Minister stated that Sri Lanka would be the next Chair of the IORA from 2023 to 2025 with a firm conviction to further expand and elevate the scope and breadth of the organisation to be more relevant and more pertinent to the rapidly emerging importance of the Indian Ocean in the current geo-political and geo-economic scenario.

The meeting was participated by the Ministers of Foreign Affairs and Ministers of State for Forieng Affairs of the 23-IORA member states and Senior Officials of the 10-IORA Dialogue Partners respectively. Minister Sabry would be having a number of bilateral meetings with the counterpart members of the IORA countries on the margins of the IORA Council of Ministers’ Meeting and with the senior most leadership of the Government of Bangladesh.