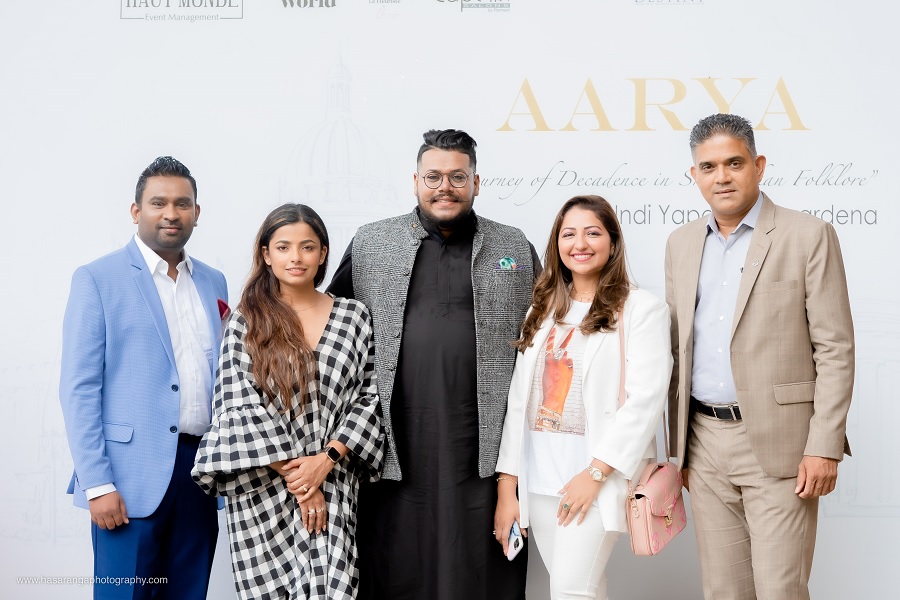 Leading couturier Indi Yapa Abeywardena is set to take over the runway in style, bringing together a celebration of fashion, design, diversity, history, and culture. ‘Aarya by Indi’ is an upcoming Spring and Summer 2023 fashion show that will take place on 18 November 2022 at the Colombo Town Hall Building. The collection was named Aarya after Indi’s niece, with the historical significance behind the word being a reference to goddesses Parvati and Durga, and translating to the noble lady.

At the exclusive media announcement of Arya by Indi at Cinnamon Lakeside Colombo, Indi announced: “The show will be an amalgamation of storytelling, textiles, and history. The Aarya collection embodies a sense of heritage and is heavily inspired by the ancient paintings and architecture of Sri Lanka. I would describe it as a translation of the past to the present.”

The Aarya collection is set to feature hand-drawn prints, powerful statement pieces, inclusive outfits, and meticulously handcrafted textures that the brand Indi is known for. The collection has over 50 styles, ranging from bridal and ethnic wear to western wear like dresses, gowns, jumpsuits, blouses, and sarees. Focusing on sustainability, the collection consists of detachable pieces and silhouettes designed to be deconstructed and worn as separates, prolonging the lifespan of these garments.

As the designer, Indi is honoured and excited to put together a fashion show of this grandeur through her brand House of Indi to showcase her couture collection single-handedly. The entire fashion show comprises Indi’s designs alone – she has worked tirelessly to organise this event and promises to deliver through her designs.

Indi explained her inspiration for the Aarya collection: “Fashion has witnessed a massive transition, from embracing cultures to empowering traditions. Inspiration is everywhere – in nature, architecture, people going about their lives, a piece of art, an intricately decorated home, and my travels across our country.”

The Aarya by Indi fashion show has also incorporated futuristic elements through special performances by talented local artists. As an entrepreneur, Indi always strives to empower the younger generation, especially women, by supporting them with the aim of transforming them into stronger individuals. She uses her skills as an entrepreneur to advocate for higher causes through her passion for art, history, and social justice. In doing so, she redefined what being a designer could represent, inspiring a wave of young and emerging designers to use fashion as a means of sparkling cultural change.

Indi also emphasised the importance of putting Sri Lanka on the global map as a design destination and fashion hub to promote local artisans, craftsmen, and products, enabling them to attract international buyers. Indi expressed her immense gratitude to everyone who has been and continues to be a pillar of support behind the success of her celebrating a decade in fashion.

Christell Skin Clinic, the foremost cosmetology clinic in Sri Lanka and the Maldives, headed by two of Sri Lanka’s leading cosmetology experts, Prof. Ramani Arsecularatne and Dr. Shanika Arsecularatne, is one of the main sponsors of the event. Chariot Bakery and Restaurant, a longstanding and beloved brand in Sri Lanka, is the official food partner.

Cinnamon Grand Colombo and Cinnamon Lakeside Colombo have joined as the official hospitality partner. Cinnamon Hotels represents a chain of modernity, vibrance, inspiring hospitality, and is committed to going the extra mile to satisfy customers.

Aroma Bliss Ceylon is one of the sponsors of the show. They specialize in creating innovative, natural skin and hair care products. Aroma Bliss combines premium-grade natural extracts with innovative research to create natural and luxury skincare products. Sri Lankan Airlines is the proud official airline partner. They are our National Carrier and award-winning airline with a reputation for service, comfort, safety, reliability, and punctuality.

Brian Kerkoven Academy is the model agency. The Make-Up will be done by a team of top Certified Professionals in the industry. Capello Salons are the official Hair Partner, Beyond Destiny is on board as the photography partner, Nierra Shoes is the footwear partner, the official jewellery partner is Gitano Collection and Lè Floristè will be supplying the florals. Concierge services are to be provided by Wine World. Haut Monde Event Management is the official event and PR partner.

Renowned designer and entrepreneur Indeevari Yapa Abeywardena; well known as Indi. She has claimed years of experience in the world of fashion and designs both locally and internationally. House of Indi Pvt Ltd was established in 2010. Celebrating a decade of design, today the name ‘Indi’ is synonymous with fashion. From INDI couture wear, IYA Bride, iBRIDE Bridal Lounge, WH, Indi Bindi, and INDI DIVA. Through her decade of eponymous labels, Indi has revived traditional Sri Lankan crafts and embroideries, giving small-scale artisans and craftsmen a platform. Trailblazing in the fashion arena, Indi and her brand has bagged many awards throughout the years. Indi has established her brand as a paragon of extravagance.