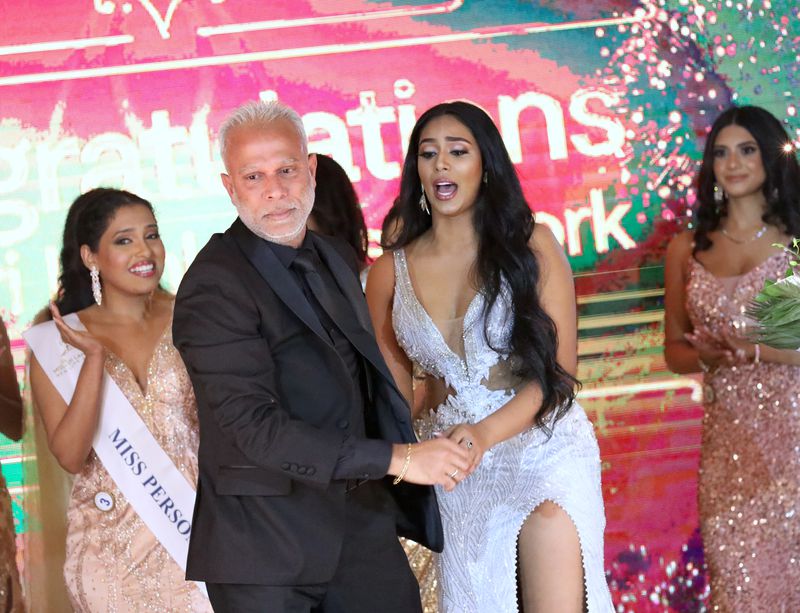 Angelia Gunasekara was crowned the first ever Miss Sri Lanka New York at the pageant held at The Vanderbilt in South Beach.

More than 300 attendees came out to support 14 contestants who dazzled at the first-ever Miss Sri Lanka New York beauty pageant.

Beyond serving as a celebration of culture, the event had a twofold mission; first, to support Sri Lanka in these trying times.

“At the beginning we thought of a way to help Sri Lanka. We are in a difficult condition,” Miss Sri Lanka New York 2022 Committee member Chandra Muniweera said.

The organizers said funds raised at the event will go to the national cancer hospital of Sri Lanka, which is currently struggling with equipment and medicine.

Secondly, the pageant aims to help “young women realize their full potential and become role models for future generations, in line with core Sri Lankan values,” a statement from the pageant’s booklet reads.

The committee decided to hold the event on Staten Island, where there is a large, vibrant Sri Lankan community.

Thousands of Staten Islanders originally hail from, or have roots in, the South Asian island nation of 22 million, and census data shows the borough is home to at least 30% of all Sri Lankans in the city.

“We have the biggest Sri Lankan community here so we thought we should do something…Sri Lanka is not in a very good situation at the moment. So we were thinking, what should we do?” Miss Sri Lanka New York 2022 Committee member Sujani Fernando said. “We thought, we have to do something for the community and the girls here. To bring their talent, to bring some exposure for them. Meanwhile collect something and send it back to Sri Lanka.”

Sponsors and guests were treated to a delightful display of elegance and class. However, unlike typical pageants, the event had a traditional Sri Lankan flair. As white lights danced across the ballroom, dancers from the Sri Lankan Dance Academy of New York and Kalanikethana New Jersey mesmerized the audience between competition segments.

There were multiple “mini pageants,” including the most photogenic contest, the best national costume segment, the talent competition, the personality pageant, and the congeniality contest. Most had been completed prior to the event, with the exception of national costume.

During a candlelit dinner, guests saw the national costume segment in which the contestants donned elaborate outfits that resembled various national symbols of Sri Lanka. Then, the hopefuls switched into Havana dresses, painting the stage with a collage of colors. Finally, the competition wrapped up with a classic evening gown segment.

Of the 14 women that entered the pageant, a vast majority reside on Staten Island:

The contestant pool was so strong that the judges chose a total of six finalists — more than the originally planned five. The women had received instruction from Los Angeles-based pageant coach Morina Dass in the months leading up to the pageant.

After her win, the beaming Gunasekara was crowned with a handcrafted tiara from Ashadi Jewellers. Committee members presented all contestants with gifts. The top three received unique rewards, bouquets and cash prizes. The grand prize was $1,000.

“Honestly, it’s a shocker to me. I don’t know what to say, I’m speechless,” Gunasekara said. “I’m so grateful and thankful for everyone that supported me, that pushed me to do this, that helped me within this journey after so many months.” (Courtesy silive.com)