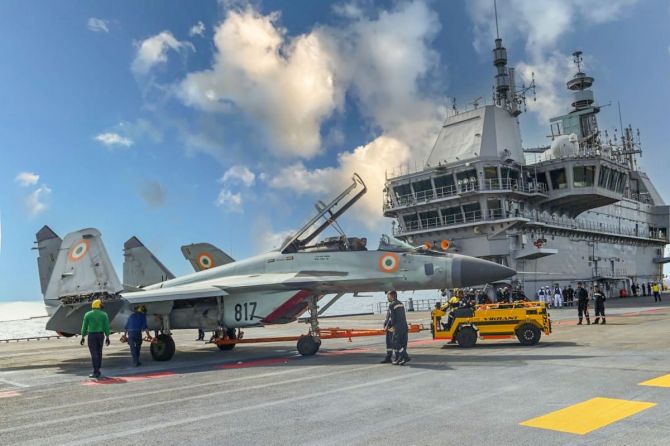 Last fortnight, when the Indian Naval Ship Vikrant was commissioned into the navy’s fleet, we joined a group of just five countries that each operate more than one aircraft carrier.

China, Italy and the United Kingdom also have two carriers each.

The United States navy — the 900-pound gorilla of aircraft carrier operations — has 11 carriers, each displacing about 100,000 tonnes, projecting American power across the globe.

While our two carriers might appear to constitute a respectable power projection capability, they would seldom translate into more than a single combat-ready carrier.

The US navy’s Marine Tracker Web site, which tracks the deployment of major American warships, reveals that as of August 29, only three US navy carrier strike groups (CSG) were operationally deployed — less than a quarter of America’s carriers.

To have two carriers operationally available, the naval fleet must have three aircraft carriers since, most of the time, one of those three would be in the dockyard for maintenance.

The navy projects its requirement for two deployed carriers in simple terms: One for the east coast (the Bay of Bengal and Malacca Strait) and a second for the west coast (the Arabian Sea, the Pakistan coast and West Asia).

But of late, the navy brass has begun advocating for a third deployed carrier to carry out power projection at longer ranges across the Indian Ocean Region.

But operationally deploying three carriers would require a four-carrier fleet.

So the navy’s requirement is not just for a second indigenous aircraft carrier (IAC-2) but also for a third one (IAC-3), along with its own aviation group and the destroyers, frigates, corvettes, replenishment vessels and submarines needed for three carrier battle groups (CBGs).

Meanwhile, as in most navies, an internal debate rages between the ‘sea control’ proponents of decisive naval battle, in which aircraft carriers play a decisive role; and ‘sea denial’ advocates, in which dispersed battleships and submarines occupy centre stage.

What is certain is that India would need enormous financial resources for creating such forces.

Former US senator Everett Dirksen, known for his acerbic wit, famously cautioned against how government spending spiralled out of control: ‘A billion here, a billion there, and pretty soon you’re talking real money.’

However, aircraft carriers and large warships, like no other weapons platforms, have peacetime use as much as during wartime, serving as a diplomatic tool for showing the flag to allies, partners and adversaries alike.

In addition, naval forces have an unparalleled capability for dispensing humanitarian aid and disaster relief, as the Indian Navy did after the Asian tsunami of 2004, earning an enviable reputation as a force that could reach all across the Indian Ocean littoral in peacetime as in war.

Just as a large fleet of strategic transport aircraft has given the Indian Air Force a capability that has utility both in peacetime and war, a fleet of large and capable warships provide the capability to reach across an ocean both in peace and in war.

The US Congress has recognised this explicitly. America’s latest National Defence Authorisation Act — the US federal law that specifies the annual defence budget and expenditures under various heads — has for the first time given the navy legal and budgetary powers to discharge a clear peacetime, as well as its combat role.

The new US formulation says: ‘The Navy shall be organised, trained and equipped for the peacetime promotion of national security interests and prosperity of the United States and prompt and sustained combat incident to operations at sea.’

Inserted in bold/italics is the new wording that emphasises peacetime and economic missions. All navies are about the overt display of presence. The newly-framed US law continues to recognise the US navy’s warfighting role, while enabling it to remain within the four corners of the law in discharging a peacetime role as well.

Given India’s putative role as a net security provider in the Indian Ocean Region, and the upholder of global commons such as the sea lines of communication (SLOCs) that carry 70 per cent of global trade through these waters, the navy faces the stark question: What challenges must it overcome in discharging this role?

New Delhi’s regional partners in restraining a belligerent China — primarily the US, Japan, Australia and Singapore — would like the Indian Navy to lock down the Indian Ocean Region, while the other partners can focus on deterring the People’s Liberation Army (Navy), or PLA (N) in the vicinity of the first and second island chains in the South China Sea.

This would not be easy, given the PLA (N)’s mind-boggling expansion, with Chinese warship building yards in Dalian, constructing four-five large and sophisticated destroyers simultaneously.

Furthermore, commissioning a second aircraft carrier, howsoever satisfying, does little to assuage New Delhi’s apprehensions about its 3,488-kilometre Line of Actual Control (LAC), as the India-China land border is called.

As a consequence of the PLA’s multiple encroachments across the LAC in the summer of 2020, some of which remain to be cleared, Beijing has made sure that New Delhi’s strategic attention is fixed on the LAC, rather than on the Indian Ocean.

The unsettled land border with China, where it has won a war in 1962 and continues to enjoy a military advantage, remains India’s primary security concern.

Meanwhile, the vast oceanic reaches of the Indian Ocean, which India can dominate more easily, remain at the fringes of its attention.

With India being the only member-country of the Quadrilateral that shares a land border with China, its preoccupation with the LAC is not well understood by its partner countries.

The US and Australia have noted that India’s stakes in the Indian Ocean Region are greater than in the high Himalayas.

New Delhi must show resolve, they say, since India’s own economic prosperity depends upon keeping open its SLOCs in the Indian Ocean.

On a day when the Indian Navy commissioned its second aircraft carrier, there remains a worrying lack of clarity in New Delhi about where it should focus its attention and its meagre financial resources. (rediff.com/)