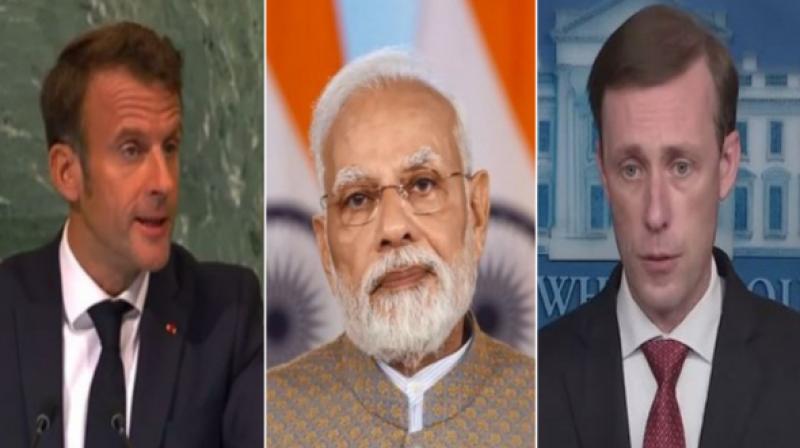 Prime Minister Narendra Modi was hailed at the United Nations General Assembly for his message to Russian President Vladimir Putin over the Ukraine war, by the US and France at the UNGA meeting in New York.

On the sidelines of the SCO summit in Samarkand on September 16, PM Modi had said “today’s era isn’t of war” while emphasising the need to find ways to address the problems of food, fuel security and fertilizers.

“Narendra Modi, the Prime Minister of India was right when he said the time is not for war. It is not for revenge against the West, or for opposing the West against the east. It is the time for a collective time for our sovereign equal states. To cope together with challenges we face,” Macron said.

Sullivan in a White House statement said: “I think what Prime Minister Modi said — a statement of principle on behalf of what he believes is right and just — was very much welcomed by the United States and for the Indian leadership, which has longstanding relationships in Moscow, from the very top all the way through the Russian government, to continue to reinforce that message that now is the time for the war to end”.

Apart from the UNGA, PM Modi’s statement became popular and was praised by international media.

Meanwhile, Russian President Putin had said that he knows about India’s position on the Ukraine conflict.

“But the other party, the leadership of Ukraine has claimed… that they refuse to engage in the negotiation process. They said they want to achieve their objectives, as they say, on the battlefield militarily. We will keep you abreast of everything that is happening over there,” he added.

“The rare reproach showed the 69-year-old Russian strongman coming under extraordinary pressure from all sides,” the Post said.

Putin said that relations between Russia and India are in the nature of a privileged strategic partnership and continue to develop very rapidly. (Deccan Chronicle)