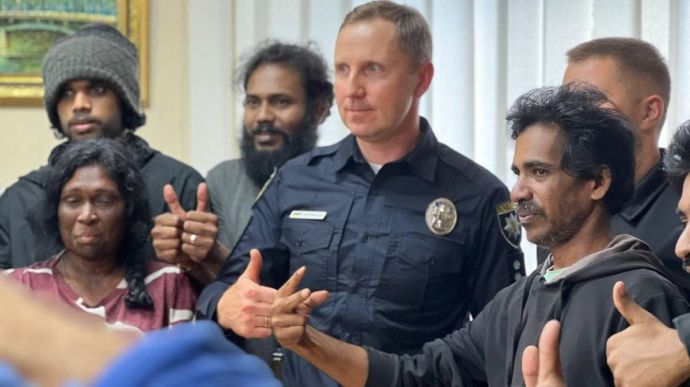 Seven Sri Lankans rescued in Ukraine have revealed how they were tortured by Russian troops.

Serhii Bolvinov, head of the Investigative Department of the National Police in Kharkiv Oblast said that the seven Sri Lankans, which included a woman and 6 men, were in Kupyansk at the start of a full-scale invasion.

In a post on Facebook, Bolvinov said that in May, they tried to reach Kharkiv on foot but were detained by Russian troops at the first checkpoint.

Bolvinov said that the Russians tied thee hands of the Sri Lankans,  put bags on their heads and took them to a makeshift prison in Vovchansk.

There the Sri Lankans were kept in inhumane conditions and were forced to work as cleaners.

“The woman was held in a prison for two months. Two of them had their nails ripped off, one was hit by a door on the head. Since the Russians do not communicate in English, so foreigners never understood what actually the Russians wanted from them, and for what they were tortured. The only thing they understood was the Russians said “money” during torture. According to this, the second world army demanded money from detained foreigners from Sri Lanka,” Bolvinov said.

Once Vovchansk was recaptured by Ukraine the Sri Lankans decided to go to Kharkiv on foot and on the way they were met by a hotel guard who gave them shelter and informed the Ukrainian police.

Bolvinov said that an investigation is now underway on the Sri Lankans to establish their identity and confirm other details.

“There is already a connection with the Sri Lankan embassy and all the foreigners police have been provided with security and proper residence conditions. Such horrors cannot be kept silent, everyone should know about it. I am grateful to the journalists who visited foreigners with us today and asked them all about it. No crime of the Russians will go unnoticed no matter how much their propaganda tries to twist or hide it,” Bolvinov said. (Colombo Gazette)