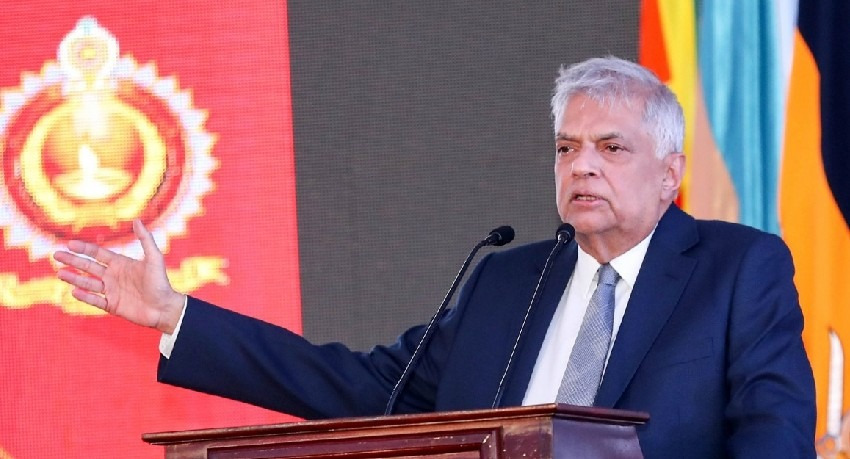 President Ranil Wickremesinghe’s address at the first-ever graduation ceremony of the National Defence College (NDC) in capital Colombo reiterated four points. The first three have been repeated by successive governments and their leaders over the past three decades in particular. Initiated under the predecessor government of President Gotabaya Rajapaksa in the midst of the Covid crisis, the fourth one, namely, the IOR-littoral Colombo Security Conclave (CSC) may have got a presidential mention for the first time.

Wickremesinghe pointed out (how) Sri Lanka was (all along) for a conflict-free Indian Ocean, how it won’t join any power bloc and at the same time ensure the security of the Indian neighbour. In the same vein, he referred to the Colombo Security Conclave, so named acknowledging the centrality of the nation to the evolving littoral IOR security architecture in the immediate and extended neighbourhood context.

On the face of it, as some critics in the country may argue this time too, a non-bloc security policy and the nation addressing India’s security concerns simultaneously may read contradictory. They are not. There is general acceptance in the nation’s strategic circles and government-oriented political leaderships that Sri Lanka’s strategic security should be tied to that of India in the IOR. The reasons are not far to seek.

One, a strategically-located island-nation, Sri Lanka acknowledges that in the foreseeable future, it cannot provide for its external security. This is despite the fact that Gota as defence secretary declared, post-war, that they would develop a ‘blue water navy’.

It is easier said than done. It did not happen through the past decade. In the given economic situation, the government cannot allocate the funds required for the purpose, again, for the foreseeable future.

It does not mean the security situation around the island would remain static. Rather, it is becoming increasingly complex and complicated than earlier. You can blame it on China’s extra-regional ambitions to dominate the Indian Ocean waters, for it to be acknowledged as a super-power, like the American adversary – or, to the US’ counter-initiative, or both. In recent times, America’s west European allies are taking a closer look at the IOR, jointly and severally, but independent of the US.

While aspiring to become a super-power and eyeing the Indian Ocean to this end, China has did not seem to remember the erstwhile Soviet Union was hailed as a super-power even when it did not have a dominant presence in the IOR, not certainly the high-volume trade routes that run not far away from Sri Lanka’s southern-most tip, Dondra Point, as used to be mentioned earlier. Now, China-controlled Hambantota Port is the international marker.

If anything, even without seeking control of the distant Indian Ocean trade-routes, the Soviet Union collapsed for a lot of other reasons. Beijing needs to take its lessons from there, but seems to be repeating them in its own ways.

China’s ways, often dubbed as ‘debt-diplomacy’, is a take-off from America’s Cold War era strategy of signing up allies and loyalties by throwing ‘peanuts’ in dollar form. For that, the US first ensured that the American dollar became the sole international currency.

For Beijing, the wait has to be longer for a substantial section of the global trade to be done in its currency, renminbi. Rather, the Ukraine War has led to mutual currency-based trade between nations, and there is talk of more. Even the dollar is said to be weakening but then the US has overcome similar situations in the post-Cold War era.

Yet, in this background, the renminbi is not going to become an accepted international currency any sooner. If one went by global assessments – over which Beijing has been silent, as ever – the Chinese economy has hit rock bottom, or is hurtling towards it.

If it did not want to trade in dollars, then even China may be forced to look for currency swaps of a different kind – like the rupee-rouble trade, as if often mentioned in the India-Russia context. Even such a mention is only in media analyses, neither government has spoken about it.

The truth is that even for China, dollar may be the safest bet just now, as other nations doing business with the nation, or even wanting to borrow more from Beijing would prefer it that way. China is slowly finding out that even in terms of fresh borrowings, nations want to go to take the harsher IMF route. If they come back to China, it’s only to try and re-work repayment schedules for past debts. Sri Lanka’s is a case in point.

It is still not too late for China to go back to the black board and ask itself how the US could sign up so many allies/dependencies so early after the Second World War whereas the Soviet Union could not do so. The answer is obvious. The Soviets seemed to have understood it even then whereas Beijing is unable to decipher the writing on the wall even in this distant future.

One, leading Europe in the victorious Second World War made the US readily acceptable in the Continent. Europe came with the global colonies of most European nations. Barring France, which retained its colonies, the rest left it. The UK parent of the erstwhile American colony took the lead. It almost handed over past colonies, barring of course India and Sri Lanka, to the US on a platter. The rest, the dollar and the IMF-World Bank combo took care of.

It may sound a simple or even a simplistic explanation. But that is also the crux of the matter. Xi’s China does not possess such advantages to ape the Cold War US on this score and hope to succeed. It has not divined an alternate model, either.

It is in this context that Sri Lanka too has to see the emerging IOR security architecture, as it has been doing all along, especially since the end of the Cold War. The nation does not want non-regional powers like the US and China as strategic allies.

It has hence tied its security concerns and interests to those of India, but in theory, with those of India. There is truth in the Sri Lankan realisation that India alone from among the littoral nations has the politico-military wherewithal to defend the shared Indian Ocean waters from external threats, real and possible now and later.

India and Sri Lanka especially share similar concerns about IOR security in the shared neighbourhood. The difference arises while considering the fact that all of India’s security concerns are not Sri Lanka’s, per se. China, for instance, Pakistan, in the past. Why, even the US in the Cold War era.

Contextualised to a regional security architecture whose aim is to keep extra-regional powers out, India’s concerns should become that of Sri Lanka’s and vice versa. While Sri Lanka has had nothing to choose from the Cold War America and post-Cold War China since, both instead have commercial value for the nation.

In these times of economic distress, Sri Lanka is not going to give up on the extra bucks that hosting foreign navies on commercial terms (other than for bilateral military exercises) would bring in. Wickremesinghe said as much and openly in his NDC address.

Even that was a part of ‘Mahinda Chintanaya’, the much-publicised election manifesto of Wickremesinghe’s rival Mahinda Rajapaksa in the presidential polls of 2005. The latter won the polls and became President, for a momentous ten-year term until losing power in Elections-2015.

Yet, it is wrong to assume or argue that Wickremesinghe was mouthing Mahinda’s policy/philosophy now only because he is dependent on the other for parliamentary majority. If anything, the Chintanaya only outlined a national policy, which Rajapaksa had inherited and which Ranil had held onto as a legacy as Prime Minister, 2015-19.

Founded in November 2020, the Colombo Security Conclave (CSC) with India, Maldives, Mauritius and Sri Lanka as members now — and Bangladesh and Seychelles as observers – has a defining, rather re-defining role if Wickremesinghe’s iterations are to have any meaning and effect. Calibrated though, these nations have to evolve into a defence cooperation agreement.

There is considered consensus among member-nations that India is central to any such security architecture, and such an architecture would also consider India’s security concerns as its own. There should be no problem up to this point. It is in the next stage, of India signing up as a member of the US-led Quad and Indo-Pacific, and unilaterally so, that has proved to be problematic for Sri Lanka, for instance.

Arguably, India can impose its security concerns on Sri Lanka or any other CSC member-nation. But it cannot impose its allies on the rest or on the CSC as a consensus-centred regional forum. In India, there is a kind of national consensus in the matter, owing to the nation’s historic adversity with China and Pakistan.

New Delhi needs to acknowledge the travesty of domestic politics in each of these nations and consequent electoral possibilities every five years. There is political consensus in these nations, especially those closer to the Indian coast, namely, Bangladesh, Maldives and Sri Lanka, that they do not want extra-regional powers fighting their wars for superiority in their shared Indian Ocean. They acknowledge India’s leadership up to this point – but not if New Delhi takes unilateral alliance decisions – with the Soviet Union earlier and the US at present – and expect them to follow suit.

Yuan Wang-5 and after

Coming as it did, not long after the ‘Wang Yang-5’ Chinese ship controversy, President Wickremesinghe clarified in his NDC address how navies of the world are welcome to Sri Lanka (on commercial terms?). There is still a need to balance this with India’s security concerns, which he too acknowledged as weighing with Sri Lanka as those before him in that position.

Balancing the multiple interests and concerns is the name of the game. The CSC was devised to address common security concerns. Though it may have inherent institutional weakness at infancy, the organisation should still have common mechanisms to trash out overlapping/contradicting security concerns of the ‘Yuan Wang-5’ kind.

This cannot happen at the level of the NSAs alone – but need political consensus at the highest echelons in every country. From there, the NSAs and others could take it forward for a structured and mutually-accommodative apparatus that works on the ground, and has in-built provisions for improvements and improvisations as they go along.

Else, there can only be periodic repeats of the Hambantota, Ceylon Port City and now the Yuan Wang-5 kind, where the likes of super-power America too would have genuine cause for concern, in the form of its Diego Garcia military base, not faraway from Hambantota, that too across the open seas.