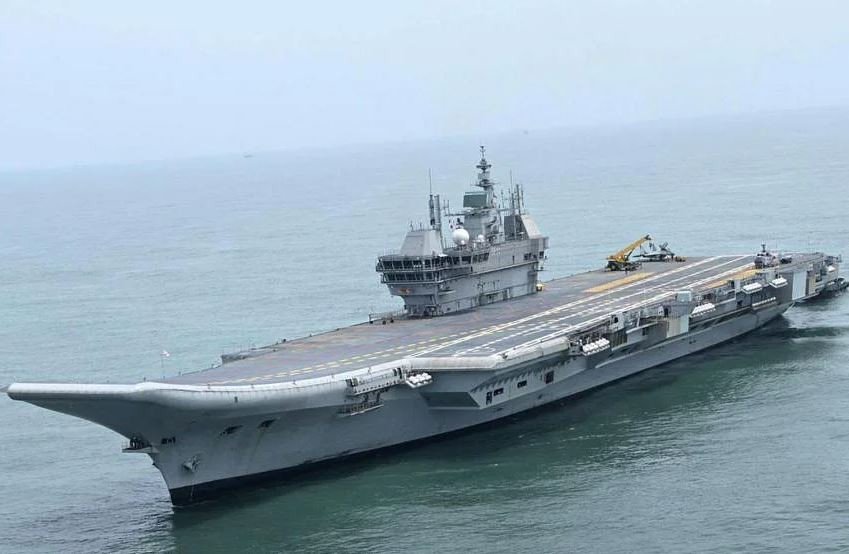 He calls it a floating city and a symbol of indigenous potential. India has established itself as the undisputed leader in the Indian Ocean maritime security.

India has made a giant leap forward in maritime security in the Indian Ocean region after Indian Prime Minister Narendra Modi commissioned the first indigenous aircraft carrier, INS Vikrant, in Kochi on Friday.

On the sidelines of the ceremony to commission, the first indigenous aircraft carrier, INS Vikrant, Prime Minister Narendra Modi also unveiled the new naval ensign and the flag of the Indian Navy.

The new Naval Ensign replaced the Saint Georges Cross in the centre, which indicated the age-old association Indian naval forces had with the United Kingdom.

The Indian Navy crest is now on a navy blue background enclosed in an octagon representing the royal seal of Chhatrapati Shivaji Maharaj, who built a strong navy to secure maritime borders with his foresight.

The first change to the Indian Navy Ensign occurred in the post-independence era in 1950, when the distinctive tri-colour identity of India was inserted and displayed in the upper left corner of the crest.

A fortnight ago, in his Independence Day speech, the Prime Minister made it clear that there was a need to decolonise India.

While calling for decolonisation, he even urged everyone to look for the traces of slavery around them so that the nation could eliminate them.

The international media picked up the commissioning of Vikrant with enthusiasm, welcoming Indian efforts to build an indigenous aircraft carrier.

The design of the INS Vikrant, the 45000 tonne aircraft carrier, showcased Indian engineering prowess in building and operating an advanced and exceptionally complex platform at sea.

The ship is 262 metres long and can cruise at up to 28 knots. At the same time, it can carry more than 30 aircraft and helicopters onboard, including indigenous Light Combat Aircraft (LCA) and Advanced Light Helicopters (ALH).

In a detailed account, the Hindu newspaper said the first aircraft carrier belonging to India was the British-origin Vikrant (R11), which was famously seen in action in 1971 and was retired from service in 1997.

The original plan was to build INS Vikrant as an air defence ship, but it was shaped into a fully-fledged 40,000-tonne aircraft carrier.

The design and construction work associated with ANS Vikrant inexorably propelled India into an elite club of nations such as the United States, the United Kingdom, Russia, France, China, and Italy.

The INS Vikrant paved the way for the indigenous development of every aspect of the aircraft carrier, including the systems and the combat management system.

The chairman and managing director of Cochin Shipyard Limited (CSL), Madhu Nair, said it was a moment to rejoice as a nation.

“It is a moment to rejoice as a nation. It is a direct result of teamwork by over 550 entities; the Navy, the shipyard, public-sector and private enterprises, and MSMEs. “Everyone had at the back of their minds the realisation that they were creating history,” he said.

He, however, pointed out that there were hiccups in the supply chain due to the non-delivery of aviation equipment from Russia on time.

He said the delays led to hold-ups. In August, the carrier began a series of sea trials, and on successful completion, it was time for the induction of the ship, which happened on Friday.

According to the Hindu newspaper, the Navy has said they would follow the practises adopted by other advanced countries that have experience in building aircraft carriers as far as the deck integration trials of fixed-wing aircraft (fighters) are concerned.

The post-commissioning of the ship will pave the way for the exploitation of aviation facilities to be carried out when the operation, command of the aircraft carrier, and flight safety are with the Indian Navy.

The Navy also expects to get the Barak-8 long-range surface-to-air missile during this period.

With two lifts fitted on either side of the superstructure, Vikrant can move aircraft between the flight deck and the hangar without hampering air operations from the deck floor of the ship.

It was a moment that was 13 years in the making. India’s other aircraft carrier, INS Vikramaditya, can carry more than 30 aircraft. The UK Royal Navy’s HMS Queen Elizabeth can carry about 40, and the US Navy’s Nimitz class carriers can accommodate more than 60 aircraft.

Vikrant, which cost around 200 billion rupees ($2.5 billion; £2.1 billion), was scheduled to enter service in 2017. But the second phase of its construction was beset by delays. The ship’s commissioning was a historic moment for India, which will now join a select group of countries capable of building such a vessel. It’s also a shot in the arm for Prime Minister Modi’s plans to boost domestic defence manufacturing. India’s first aircraft carrier, bought from the UK and commissioned in 1961, was called. The first INS Vikrant was a major symbol of national pride and played an important role in several military operations India undertook–including the 1971 war with Pakistan–before it was decommissioned in 1997.

After Friday’s commissioning, the new Vikrant will sail across both Indian and international waters, accompanied by a fleet of frigates, destroyers, and submarines to protect it.

At present, Vikrant is at the government-owned Cochin Shipyard in Kerala State, where the ship was built and where the commissioning ceremony was held.

Once it’s in service, it will eventually be the workplace—and home—for 1,700 crew members.

Ahead of the ceremony, there were technicians everywhere—fixing cables, polishing the interiors, and making sure everything was in shape for the commissioning.

“From here, the gas turbine engines can be operated, which is how this floating city moves,” Lieutenant-Commander Sai Krishnan, a senior engineering officer, said. The four engines on board together build up 88MW of power—enough to supply a city, he added.

There are three galleys, or pantries, which have coffee-vending machines, tables and chairs, and places to keep large utensils.

“If you combine these galleys, close to 600 personnel can have their meals at the same time,” an officer said. The ship also has a 16-bed hospital, two operating theatres, and intensive care units.

In the hangar, two Russian-origin aircraft—a MiG-29K fighter and a Kamov-31 early warning helicopter—are placed towards the rear end.

“Think of this like a parking space, with a team that looks after maintenance and repairs.” “From here, special lifts take the aircraft to the flight deck for flying operations,” said Lieutenant-Commander Vijay Sheoran.

The navy plans to test intensive flying operations from the ship later this year.

“Our flight deck size is nearly 12,500sqm—almost as big as two-and-a-half hockey fields—and we can operate 12 fighter planes and six helicopters at once,” said Lieutenant-Commander Siddharth Soni, the flight deck officer.

Though India will now have two aircraft carriers-INS Vikramaditya and Vikrant-many navy chiefs have said publicly that it needs at least one more. But the government hasn’t given funds for this yet. Retired Vice-Admiral AK Chawla, who until recently had supervised Vikrant’s progress, says the choice is between acting now or being left out. He cites the example of China, which has expanded its maritime power by “building aircraft carriers at an amazing pace.” “You can’t build carriers overnight, it takes time and, therefore, it’s very important that we have more ships like Vikrant which can protect our fleet, travel far and knock out enemy ships before they can get to the aircraft carrier or other ships,” he says.