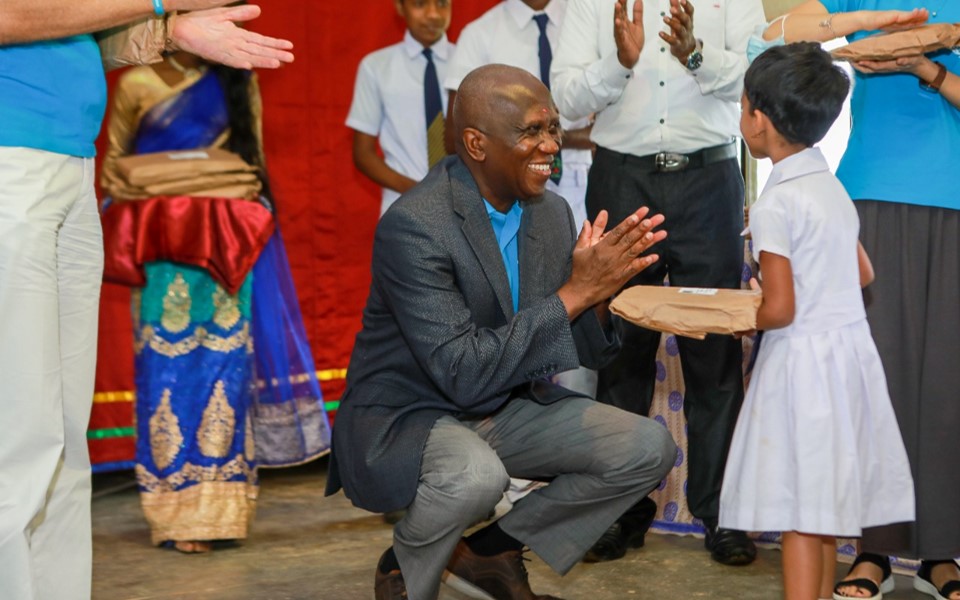 The nation needs to thank Education Minister Susil Premajayantha for his determination to keep all school-going children out of hunger’s grip. Twice in a few days, he has talked about providing free meals to school children. On the second occasion, he went as far as to declare that he was ready to ‘beg’ (foreign countries) for the purpose – and also appealed to the political Opposition, too, to take up the cause with Colombo’s diplomatic community.

It is ironical that in a predominantly rice-producing, rice-eating nation, the price of bread and wheat flour (the latter imported for manufacture of the former) determines the affordability quotient all across the urban centres, starting with capital Colombo, but not ending there anymore. So does the price of milk powder, in a country where the availability of fresh milk has never ever been a problem.

Both are procured through imports that the nation had never afforded in terms of prioritisation, and definitely not any more. Other than the uppermost crusts, most middle-income families could ill-afford them anymore, given the steep rise in dollar-rates and the even more steep fall inn forex reserves. For ‘em all, it is not going to be the same again, for a long, long time to come.

The UNICEF has already reported the vulnerability of the nation’s children to hunger and malnutrition owing to the current economic crisis, huge forex shortage and unprecedented non-availability of food, medicines and nutrients. This has meant that through the pandemic period, since followed by the economic crisis, the nation’s children have suffered, in terms of education and healthy lives.

Children are not the only vulnerable section. Decades of relatively good health care has increased the average mortality age in the country. It translates as more of the older generation, both men and women, who are in the vulnerable category. The economic crisis may have already caused many poor families to focus more on the future generations than what is often dismissed as the ‘unproductive past’.

The government needs to come up with a comprehensive policy for the vulnerable sections and specific communities and address them, with foreign aid, begging or not. It should create the right type of bureaucratic infrastructure with NGO/INGO participation to oversee the implementation of those programmes down to the grassroots-level. If foreign governments are going to chip in, they would want to keep an account and direct the ‘best usage’ of their aid. Involving the INGOs then becomes unavoidable.

When the frequent talk is about the excessive number of armed forces personnel even a decade-plus after the end of the ethnic war, the government could assign them to social welfare duties, especially in running free urban and rural hospitals, over and above the government hospitals and the teaching hospitals in different locations across the country.

Before now, the post-war dispensation had thought of utilising the services of the armed forces in ‘constructive social work’. They were asked to build IDP colonies, build and repair war-shattered houses in the North and East, and lay drainage across Colombo and elsewhere. The latter especially was not to their liking, and they were believed to have voted against incumbent Mahinda Rajapaksa in the 2015 presidential polls, which he lost.

In all this, children should become the first priority of the government as they are for their families. The government should revive the free meal scheme that covered a million children since slain President Ranasinghe Premadasa introduced the same three decades ago. The scheme covered a million students, or a fourth of all school-going children in the country, until funds were slashed to a third at the height of the economic crisis earlier this year.

The government should also devise nutrients-supply scheme for pre-school children in homes through local hospitals or army camps. Where feasible, it should open old age homes in every region/district for the aged and infirm, whose competitive ability for their share in the family cake (bread or worse) too has waned with age and economic crisis.

When heart rules the head

It is not going to be easy, but these are areas where international assistance may not be difficult in obtaining, as different from larger aid packages through the IMF-driven mechanism or not. That way, the IMF and World Bank look at nations as failing commercial propositions. Their branks are where their hearts should be. Or, that is how host governments often feel.

In the case of children and other vulnerable groups, the WHO and the World Food Programme (WFP), et al, have their hearts in the right place. Their hearts also rule their brains, at times substituting for the same. So dealing with them will be mighty easier than dealing with the IMF’s Shylocks – or, how they are seen by nations in distress.

Streamlining the aid for the vulnerable sections including school children, all will be a tough task. But the government as an institution has experience in coordinating such efforts when tsunami struck in end-2004. The tsunami also showed for Sri Lanka how the world grieved and rallied for the nation when it became absolutely necessary.

Academics at higher-levels of policy-guidance and administration would frown upon the idea. However, the government as a contingency plan should consider giving all-pass to student in lower-grades up to say, O-Level and focus on studies and examination schemes only from there. It may have to go on for say up to five years, when there can be a review and reversal.

The reasons are not far to seek. As studies and experiences elsewhere should show, children in economically vulnerable situations, when they fail to graduate to the next level in their school days, they invariably become instant drop-outs. If they take up some vocation or odd jobs here and there, to help themselves and at times their families, too, that would still be a poor consolation.

But there is an equal chance that these drop-outs, more often boys than girls, become vagabonds, often taking to petty crimes like pick-pocketing and thievery for survival. But there are those who end up becoming gangsters and hard-core criminals. The more enlightened among them end up in militant political groups and insurgencies.

The nation has enough experience with it all, both in the Sinhala South and also the Tamil North and East. Today, the economy is worse than it was in the seventies, when rural Sri Lanka was burning with ambitions and aspirations that the State could not either meet, nor quell.

Since then, restoration of education and relative opportunities for socio-economic upward mobility has helped, especially in the Sinhala South, for reasons that are obvious. All this is saying a lot in this era of IT explosion, where as much as ideology and radicalisation on available on the social media as fad and fashion.

Keeping the future generations out of trouble, and also out of the long reach of law, thus becomes a primary concern, both for the State and the society, as it is with ensuring the physical health of children, to grow up into healthier adults. If having school and community-level psychological counselling would help, the government should attempt it, too!