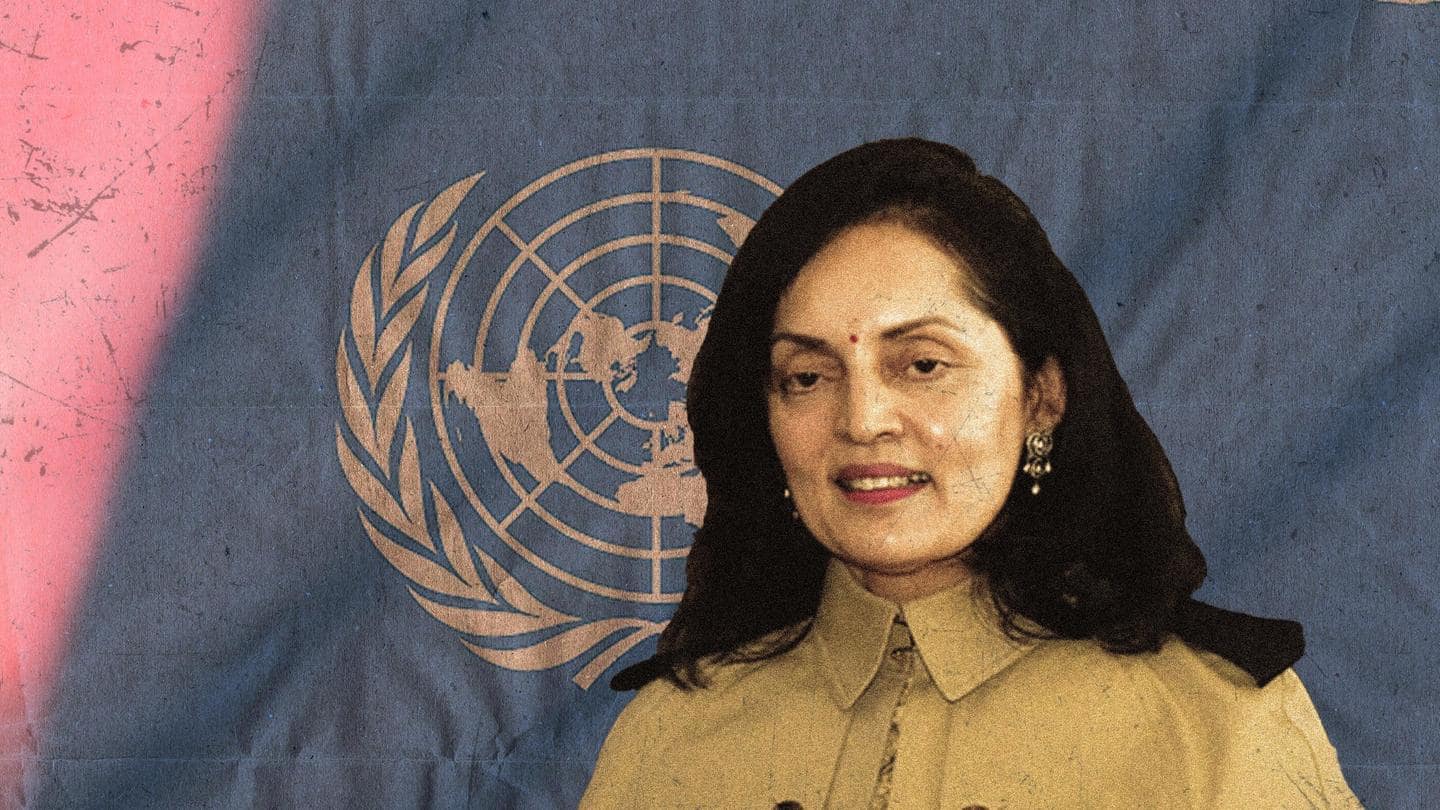 Ruchira Kamboj during her address took swipes at China and Pakistan for adopting double standards.

While India and China were exchanging verbal barbs over a Chinese research ship docking in a Sri Lankan port, India had its way against China elsewhere in the UN Security Council.

Ruchira Kamboj, the first lady permanent representative of India at the United Nations, came up with a severe indictment against China and the double standards adopted by the Chinese administration on many facets of security.

Addressing the United Nations Security Council, she took a jab at China while cautioning against any double standards on issues of combating terrorism. She stressed that any coercive or unilateral action that would change the status quo by force is an affront to the principle of common security.

India has seized the opportunity to take swipes at China, the formidable opponent of India and its allies, to take cognizance of the geopolitical concerns of each country in the global arena.

At the United Nations Security Council meeting that focused on the topic, promoting Common Security through Dialogues and Cooperation, Kamboj said that all countries should respect the sovereignty and territorial integrity of all. She also underlined the importance of taking notice of all international agreements and respecting them.

Kamboj, taking a dig at China and its close ally Pakistan, said, “Common security is also only feasible when all countries stand together against common threats such as terrorism and do not engage in double standards while preaching otherwise.”

Although she was not specific, she had in the background the contentious visit of the Yuan Wang 5, the Chinese research and survey vessel that docked at the Southern Hambantota Port in Sri Lanka. The visit inexorably raised India’s concerns and those of other world powers such as the US, the UK, and Japan.

The information was only privy to the higher echelons of the governing bodies of the concerned countries. The media was more or less groping in the dark about the stark realities unfolding behind the scenes.

The high-tech Chinese dual-purpose vessel Yuan Wang 5, which arrived in Hambantota while India was closely monitoring its movements, triggered considerable controversy and quietly left the port on August 23.

Indian sources said that after the vessel arrived at the Southern Hambantota port in Sri Lanka, three Indian satellites were closely monitoring its activities. Reports said that these satellites have jammed the release of the satellite monitoring signals from the controversial ship. The Indian authorities were keeping close tabs on the vessel to prevent monitoring of Indian nuclear facilities and other strategic locations along the southern coast of India.

It may have been a preemptive measure used by India to protects its regional interests. However it caused ramblings in the Chinese establishment.

Accordingly, India has used three remote-sensing reconnaissance satellites to monitor the activities of the vessel from the time it entered the Indian Ocean region.

These satellites closely monitored the vessel by feeding information to the satellite control rooms that the reports indicated the Indian space capsules had disabled the satellite monitoring capabilities of the Chinese high-tech dual-purpose ship.

However, the Chinese vessel that left the shores of Hambantota on August 23 also left behind some diplomatic misgivings between India and Sri Lanka.

In a clear sign of bitterness in relations over the Yuan Wang 5 fiasco. The Ministry of External Affairs in Delhi issued a rare travel guidance on Thursday cautioning Indian tourists about visiting Sri Lanka, stating that Sri Lanka is in the middle of a deep economic crisis.

In the meantime, Sri Lanka’s High Commissioner for Delhi, Milinda Moragoda, interviewed by the Hindu, came up with the geopolitical perceptions of the region and what it ought to be in view of the present global context.

Mr. Moragoda said it was vital to look to the future of ties because of India-Sri Lanka cooperation in the economic and strategic spheres. Apart from the financial assistance of $3.8 billion, including credit lines from India, New Delhi and Colombo are discussing more trade ties, a power-sharing grid, and infrastructure projects in renewable energy and oil storage. India has also supported Sri Lanka in talks with the International Monetary Fund (IMF) for a bailout.

High Commissioner Moragoda acknowledged that the docking of the controversial ship was an issue between India and Sri Lanka. Simultaneously, he posed the question about a framework that could be in place to prevent such problems in the future and avoid trust deficits. He also said that despite the ups and downs in the relationship, Sri Lanka would like to build an equilibrium that would not lead to any surprises in the future.

Kamboj at the UN also may have had a glimpse of what was taking place in the Indian Ocean region that was detrimental to the strategic interests of India when she came up with a veiled swipe at China for its aggressive behaviour.

Kamboj warned that any coercive or unilateral action that seeks to change the status quo by force would affront common security.

She also asserted that common security is only possible when countries respect the sovereignty and territorial integrity of all as they would expect.

At the same time, she underscored the need to undertake urgent reforms to the United Nations Security Council that reflect the characteristics of a multilateral arrangement.

Ruchira Kamboj called for more logical and meaningful reforms at the United Nations Security Council based on a multilateral arrangement, as she pointed out earlier.

Her enduring task at the United Nations Security Council is to secure a permanent berth for India at the UNSC that can be justified by any means.

The importance of India is that it could effectively reflect on the issues concerning the region that could otherwise be hushed up under the cloak of power when it reaches the United Nations.

Based on its ancient Indian ethos that sees the world as one family, India has been playing its part in being a trusted and reliable partner for all. Kamboj said, Her remarks at the UNSC briefing on Maintenance of International Peace and Security: Promoting Common Security through Dialogue and Cooperation were enthralling since they carried the voice of the developing world through the most crucially significant apparatus of the United Nations, the Security Council.

Are multilateral organisations, especially the Security Council, ready to deal with the new world order and challenges? Kamboj queried the UNSC during her delivery.

Ruchira Kamboj also echoed that the meeting is an opportune moment to engage in a serious discussion about the Indian call for reformed multilateralism, at the core of which lies the reform of the UN Security Council.

The most urgent requirement of the hour is a Security Council that is precisely representative. Otherwise, there is a risk that new plurilateral and multilateral organisations that are more representative, transparent, democratic and, consequently, more effective would replace the United Nations, Kamboj warned the Security Council.Kamboj recalled remarks made by Prime Minister Narendra Modi at the United Nations General Assembly in 2020.

“Reform in the responses, in the processes, in the character of the United Nations is the need of the hour.”

She then queried how they could aspire to common security when the common good of the global south was continuously denied representation in its decision-making.

Then she broached the question of Africa, “The most urgent thing therefore for us to do is to make the Security Council more representative of developing countries, to reflect current geopolitical realities. How do we explain that the African continent does not have permanent representation in the Security Council? Despite a majority of the issues being dealt with by the council belonging to that region?

“How can we aspire to common security in Africa when the body denies them representation permanently?”  Kamboj asked members of the UN Security Council.

Presently, the UNSC comprises five permanent members and ten non-permanent member countries elected for a two-year term by the General Assembly of the United Nations.

The five permanent members are Russia, the UK, China, France, and the United States. These countries can veto any substantive resolution.

In September 2021, the G4 nations of India, Brazil, Germany, and Japan underlined the urgency of reforming the Security Council to make it a more legitimate, effective, and representative body that reflects the reality of the contemporary world, including developing countries and significant contributors.