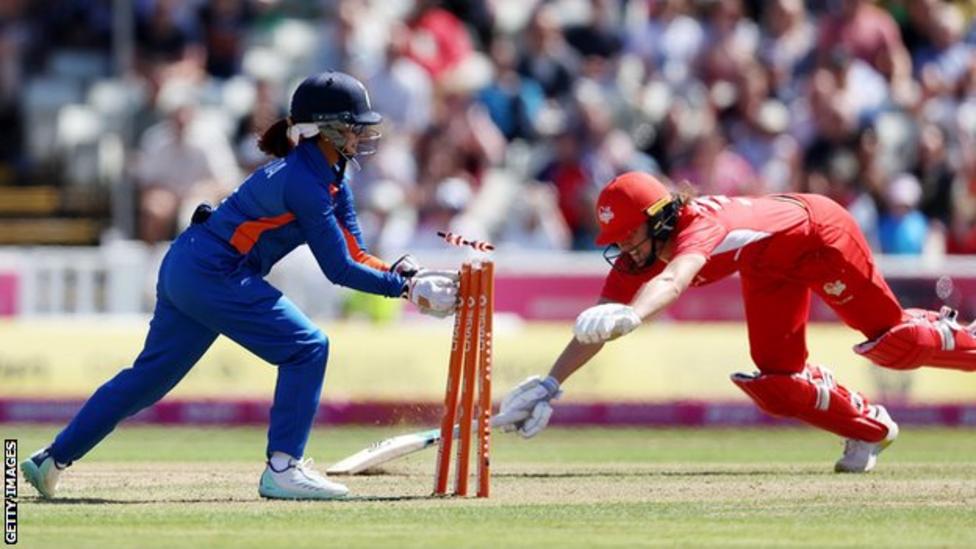 England’s hopes of winning Twenty20 gold are over after the home side fell to a four-run defeat by India in the semi-finals of the Commonwealth Games.

Opener Smriti Mandhana hit 61 off 32 balls, including three sixes, and Jemimah Rodrigues made an unbeaten 44 as India posted a challenging 164-5.

Captain Nat Sciver and Amy Jones looked like they might steer England home but Jones was run out for 31.

Desperate for runs, Sciver was also run out for 41 as England fell short.

India will face either Australia or New Zealand in Sunday’s final while England will face the loser for bronze.

England opener Danni Wyatt told BBC Sport: “Obviously we’re really disappointed not to be in the final but to get a bronze medal would be great. It’s been absolutely amazing to be a part of these Games.”

England won their group with three straight wins and demolished New Zealand’s batting in their last match, but they had no answer to India’s openers who attacked from the off.

Mandhana hit five boundaries in the first three overs to set the tone and raced to her half-century off 23 balls, clubbing eight fours and two sixes.

Sciver rang the changes in a desperate bid to stem the flow of runs and it was the seventh bowler who made the breakthrough, in the eighth over.

Left-arm seamer Freya Kemp dismissed Shafali Verma for 15 with the score on 76, but it was Mandhana’s wicket they needed most.

It came one run later when the left-hander chipped Sciver’s slower ball to Issy Wong for a simple catch.

But Rodrigues and Deepti Sharma maintained the pressure, putting on 53 for the fourth wicket with Rodrigues going on to smash 44 off 31 balls.

Sophia Dunkley gave England a decent start in reply, before falling leg before to Meghna Singh for 19.

Alice Capsey dived for safety attempting a second run but failed to ground her bat and was given out for 13 – the first of three run-outs.

After six fours, and with the pressure growing, Wyatt scooped the ball onto her own stumps for 35 when looking to accelerate.

With England falling behind the run-rate, Jones cut the ball for four and then reverse-swept another boundary as England tried to get back on track.

But with hope growing among the home fans, Jones was run out going for a quick single and Sciver was left with too much to do.

The captain hit a six to leave England needing 19 off nine balls, but when she was run out attempting a risky second the game was all but over.

With 14 needed off six balls, Sneh Rana kept it tight and although there was a late six from Sophie Ecclestone, India were not to be denied their place in the final. (Courtesy BBC)