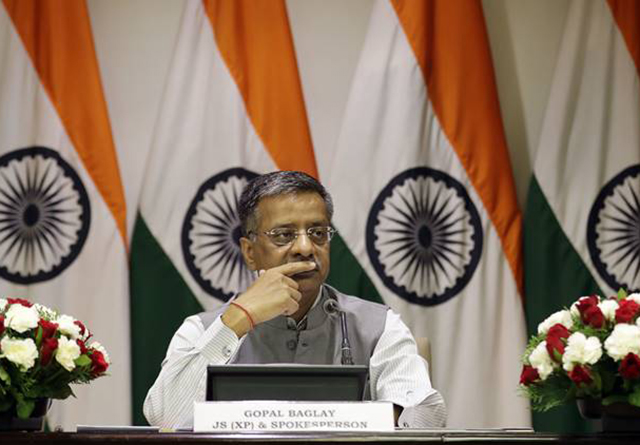 Will there be yet another diplomatic flashpoint between India and Sri Lanka over the scheduled arrival Wang 5 spy vessel at the Southern Hambantota Port close to mid-August?

The spy vessel has put India in a strategic dilemma and wants Sri Lanka to refuse entry to the Sri Lankan territorial waters owing to security concerns.

Indian High Commissioner to Sri Lanka Gopal Bagley met with Foreign Minister Ali Sabry to express his displeasure on behalf of India if Sri Lanka is to grant legitimacy to the arrival of the Yuan Wang 5 spy vessel to the Southern Hambantota port.

If Sri Lanka permits the questionable vessel to enter Sri Lankan waters, it could lead to another diplomatic standoff between India and Sri Lanka.

Foreign minister Sabry briefed the weekly meeting of the ministers, and many contributed to the view that Sri Lanka should not resort to any action that may damage the good relations between the two countries-India and Sri Lanka.

When Sri Lanka permitted the Chinese nuclear-powered submarine Changzheng 2 into the Colombo Port in 2014, under the Presidency of Mahinda Rajapaksa, it led to a diplomatic impasse between the two nations, whose diplomatic relations were at their finest at the time.

As New Delhi expressed concern over the matter, former President Gotabaya Rajapaksa, who then functioned as the Secretary to the Ministry of Defence, flew to New Delhi to meet with National Security Adviser (NSA) Ajit Doval and discuss the issue in concern.

A similar situation has arisen as regards the proposed arrival of the Yuan Wang 5 spy vessel at the Sothern Hambantota Port on August 11.

Initially, the Ministry of Defence in Colombo denied any knowledge of the arrival of the Chinese Research and Survey vessel.

Accordingly, the Ministry of Defence in Colombo denied that a Chinese research vessel engaged in satellite and space tracking would approach the Hambantota port in August of this year.

“We have no confirmation of such a vessel calling at the Hambantota port,” a Defence Ministry spokesman told The Hindu in Colombo when asked about the reports.

Chinese infiltrations into the Indian Ocean have been a delicate issue as far as India is concerned since the border disputes flared up in the formative years following the end of the British occupation of India.

Hence, India has traditionally been hostile to the Chinese military or suspected dual-purpose vessels hovering in the Indian Ocean region. The Indian Ministry of External Affairs had taken such matters up with the Sri Lankan authorities on numerous occasions in the recent past, on such visits initiated by the Chinese government.

Two Chinese research vessels in the Indian Ocean near the Andaman Islands in 2020 also raised concerns similar to those raised by the currently proposed visit of the satellite tracking ship. In 2019, the Indian Navy ordered the removal of a Chinese Naval ship Shi Yan 1, that had entered waters close to the Andaman Islands.

The latest controversy continues over the impending arrival of Yuan Wang 5 to Hambantota, and the concerns of India have already been conveyed to Sri Lanka in a diplomatic epistle that the entry of the Chinese Research and Survey vessel into the Sri Lankan waters could endanger the security of the region.

The Indian officials, in no uncertain terms, substantiated its claims of the danger it could cause to the security of the region, including India and Sri Lanka.

Independent political analysts opine that the visit undertaken by the Chinese Intercontinental Ballistic Missile Tracing Vessel Yuan Wang5 to the Southern Port of Hambantota in Sri Lanka is highly suspicious. The intentions behind this purported visit are yet to be determined.

They say it is a fully-fledged military ship with submarine intelligence and a defence deployment ship with advanced capabilities.

It could track the satellite and advanced sensors on board and virtually put South India and Sri Lanka under a security threat.

Political analysts also point out that rivalries among countries could develop as a direct consequence of the visit of this spy ship to the Indian Ocean.

India has virtually objected since it is capable of targeting defence setup and nuclear installations of India.

Reports indicate that China is planning the conduct of multiple targetable ICBMs (Intercontinental Ballistic missiles) from the sea under the guise of satellite launching.

Reports also indicate that it could target not only Asian neighbours but also the European and American continents.

Some people may pose the pertinent question of whether China was planning to blackmail Sri Lanka, especially when the country was going through the most arduous period in contemporary political history.

The arrival of this vessel at the Hambantota Port is, therefore, a blatant violation of the agreement.

It has now surfaced that someone with sinister intentions allowed the ship to enter Sri Lanka covertly while the government was not fully functioning.

However, it was not in the best interests of Sri Lanka.

The visit of this vessel is likely to have complications and far more consequences as far as India-Sri Lanka relations are concerned. India is the only country that helped salvage Sri Lanka out of one of the worst financial downturns. The help from India was humongous, and people think Sri Lanka should also reciprocate appropriately.

The Indian thinking appears to be if the Security of India is compromised, Sri Lanka also should face its consequences.

If India dragged its feet when Sri Lanka needed it the most, the economic situation was bound to slide from bad to worse since India wields a lot of influence with the multilateral creditors and the International Monetary Fund in particular.

China has a reputation for financing the corrupt activities of the Rajapaksa regime and dragging Sri Lanka towards its present economic predicament. If that is the case, it will fuel another Argalaya, waiting in the wings to unfold during the second week of August.