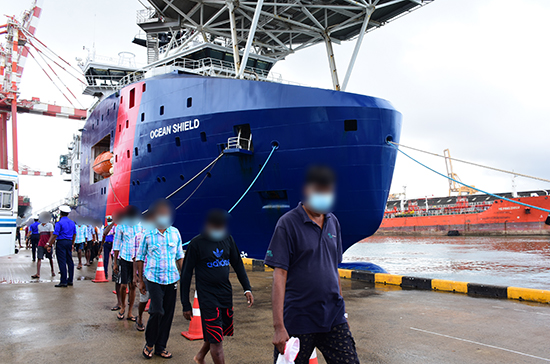 An Australian ship carrying 46 illegal immigrants from Sri Lanka arrived at the Colombo Port this morning.

The 46 individuals from Sri Lanka were apprehended on 21st July by the Australian Border Force at the Australia’s maritime border, when they were attempting to illegally migrate to Australia via sea.

This happened to be the first instance where a group of illegal immigrants from Sri Lanka was brought to the island onboard an Australian Border Force ship.

He also went on to say that the Australian authorities have returned 183 Sri Lankans, including the latest group of illegal immigrants. Adding further, he mentioned that all maritime people smuggling vessels destined to Australia since October 2013 had been returned to Sri Lanka.

High Commissioner of Australia to Sri Lanka, David Holly, Defence Adviser at the Australian High Commission in Sri Lanka, Captain Ian Cain and a group of senior officers from the Navy Headquarters and Western Naval Command were present on this occasion. (Colombo Gazette)