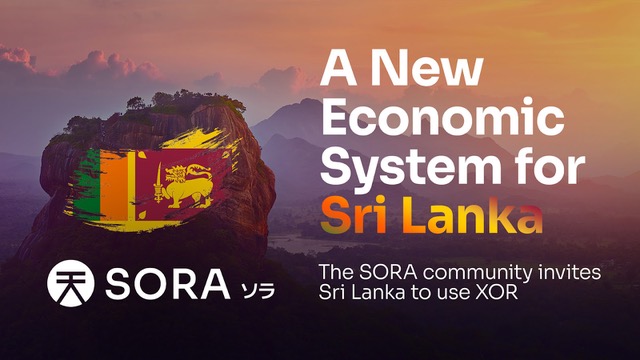 SORA (XOR) isn’t owned by any single nation or individual, but belongs to all of its users, and is designed as a new economic system for a new world, that will eliminate the pitfalls of current monetary policies, combat the injustice that may stem from existing systems, and work to remove the current enormous inequity that is apparent.

Unlike other cryptocurrencies, such as Bitcoin (that act as a foreign currency to any country that would seek to implement it), XOR is expected to become an integral part of a local economy and actively foster and promote economic growth. This is because Sri Lankans who hold XOR can join in the decision-making process to manage XOR monetary policy, and use XOR to buy and sell goods and services as well as to fund community-based projects of great importance to the people.

The launch of XOR in Sri Lanka as a new currency powered by and for the people, free of corruption, and fitting for a global economy, the money that is used for productive purposes will benefit the people of your great country and not just the pockets of a few. In essence, due to its transparency and traceability, XOR can help eliminate corruption. Because of its unique governance and economic system, it can give the people, the power to access funding desperately needed to reignite your nation’s economic growth.

XOR empowers every single user to equally, collectively, and democratically decide how they will guide the entire XOR economy, worldwide. With a XOR-based economy, the government and its officials do not hold financial or policy power over citizens. Instead, it is the citizens in collaboration with their governments that decide the allocation and use of money in an economy. Corrupt entities cannot use XOR as they do with existing monetary systems, such as a means to buy votes or discriminate against citizens who have opposing views.

SORA was created in partnership with SORAMITSU – a software company with world-wide experience and expertise, having created the Bakong Central Bank digital currency payment system for Cambodia.