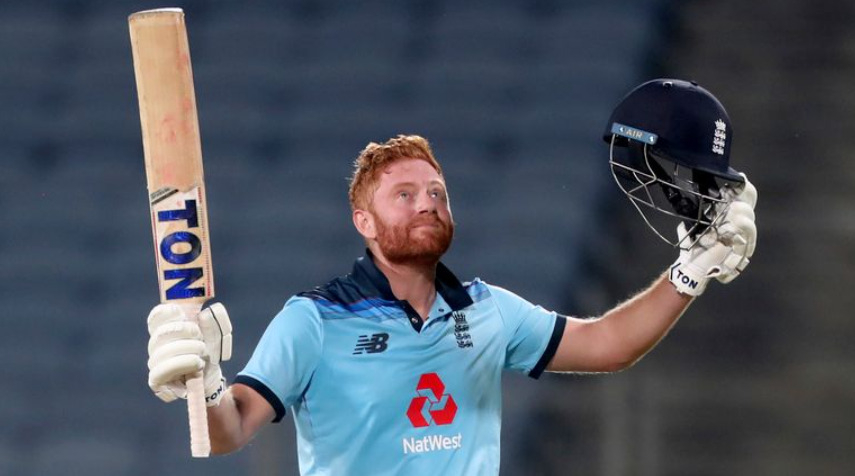 Continuing his stunning Test form, Bairstow bullied the Proteas bowlers throughout his 53-ball assault as England racked up 234-6 – their second highest T20 score.

Bairstow added 106 with Moeen Ali, who smacked 52 from 18 balls, in a riotous fourth-wicket stand lasting just 37 balls, as one over went for 33 runs.

England hit 20 sixes, the most they have ever hit in a T20 game, while Moeen’s 16-ball fifty was the fastest by an England player.

The pair heaped misery on a ragged South Africa side, who dropped Bairstow four times in a fielding performance that bordered on comical.

Despite losing both Quinton de Kock and Rilee Rossouw in the second over, the visitors threatened to pull off what would have been their record chase as 21-year-old Tristan Stubbs smashed an astonishing 72 from 28 balls.

But Chris Jordan bowled a nerveless 18th over and, with 51 needed from the final two, Stubbs was caught at long-off from the bowling of Richard Gleeson.

The Lancashire seamer took two further wickets in the over and South Africa ended on 193-8.

The second T20 of the three-match series takes place on Thursday in Cardiff as both sides build towards the T20 World Cup in the autumn.

Bairstow’s brutality was reminiscent of his 77-ball century against New Zealand, the highlight of his four centuries in three Tests earlier this summer.

He flogged the spinners and hammered anything short as he targeted the leg side. One of his eight sixes, hit over square leg off medium pacer Andile Phehlukwayo, cleared the stands.

At one stage England threatened to pass their highest T20 score of 241-3, hit against New Zealand in 2019.

Bairstow began the final over unbeaten on 90 but lost the strike to a leg-bye, saw Liam Livingstone depart caught behind for five and then holed out himself to deep mid-wicket from the penultimate ball.

Still, after Bairstow sat out England’s T20 series defeat to India earlier this month, it was a welcome return for the Yorkshireman and a batting line-up in need of a boost as they look to return to form before the World Cup in Australia.

When left-arm seamer Reece Topley’s fine run continued by having De Kock and Rossouw caught, the result looked a formality.

Despite opener Reeza Hendricks hitting 57 from 33 balls, England’s grip tightened further when Adil Rashid had Heinrich Klaasen caught long-on in his first over and Hendricks swept Moeen to deep mid-wicket.

But, with the run-rate spiralling, what started as a impressive consolation knock from Stubbs turned into a thrilling attack to keep the game alive.

Playing his third match but batting for his country for the first time, he showed incredible power to repeatedly clear the leg-side boundary by a distance.

After 16 overs South Africa were 171-5 and ahead of England at the equivalent stage but, after Sam Curran conceded 10, Jordan produced a clinic in death bowling.

England caught expertly. South Africa did not and it was that indiscipline which cost the Proteas.

They started England’s innings well, removing Jos Buttler for 22 and Jason Roy, who showed little sign of regaining his rhythm, for eight from 15 balls, but things quickly unravelled.

Klaasen was at fault for the first miss of Bairstow, which came while the right-hander was putting on 71 with Dawid Malan, who made 43.

At deep mid-wicket Hendricks did not pick the ball up and it went narrowly over his head for six. He later put another tough chance down at deep square leg after Rossouw and Hendricks spilled straightforward catches in the deep.

The 17th over, bowled by Phehlukwayo, included five sixes, a single and two wides. It was the most England have ever scored in one over of an international match.

One bright spot for the tourists was fast bowler Lungi Ngidi finishing the innings strongly to claim a remarkable 5-39, but they will need to improve quickly to level the series on Thursday. (Courtesy BBC)