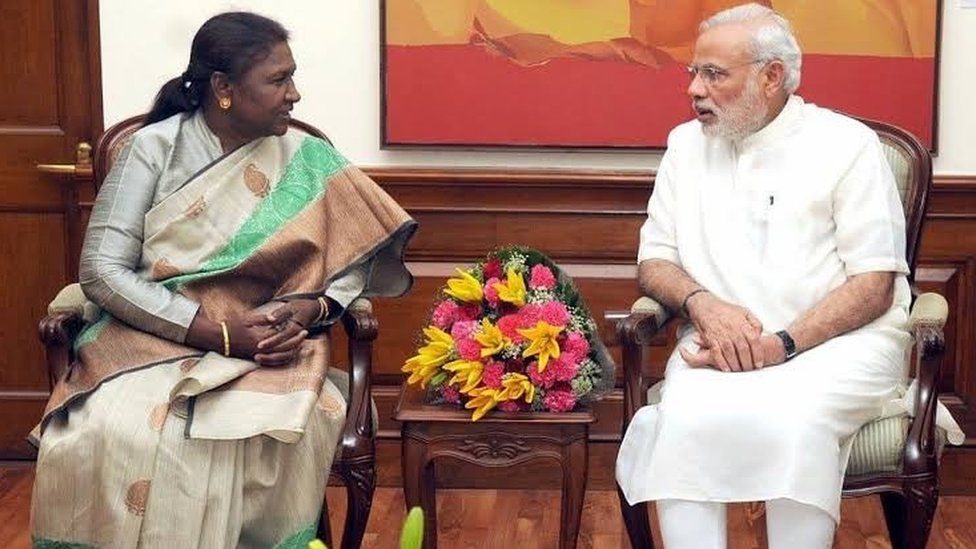 Narendra Modi, the champion of the rural folks of India, has succeeded in yet another political feat in the election of the new President overwhelmingly.

It is the second occasion that India elected a distinguished woman to the highest position in the land. Pratibha Patil made history when she became the first lady to occupy the higher echelons of the Indian administrative hierarchy.

She rose to the office of President in 2007. On 25 July 2017, Ram Nath Kovind took office as the 14th president of India and then handed over the mantle to Draupadi Murmu, sixty-four-year-old former Governor of Jharkhand.

Draupadi Murmu defeated Opposition candidate Yashwant Sinha a former Finance and Defence Minister of India, with 64.03% of the votes in favour of Murmu.

Secretary General of Rajya Sabha and the Returning Officer for Presidential Election 2022, P.C. Mody, gave the certificate to President-elect Droupadi Murmu at her residence in Delhi.

Prime Minister Narendra Modi brought her to the political limelight and made it a point to cast the first vote seeking her election. He was also the first to greet President-elect Draupadi Murmu on her ascension to the top slot, followed by a shower of greetings and best wishes for the new President, who will move into the Rashtrapati Bhavan, the official residence of the Indian President, shortly afterwards.

Murmu, who hails from the forest-dependent community of India- Santhal tribe, clinched the coveted position of President of the land of contrast, India, after four rounds of counting held through Indian electoral colleges.

She crossed the halfway mark after three rounds of voting due to heavy cross-voting from the opposing camp in her favour, which propelled her to victory. Yashwant Sinha, while conceding defeat, tweeted “I join my fellow citizens in congratulating Draupadi Murmu on her victory in the Presidential election 2022. Her election to the pinnacle of the Indian administrative structure will undoubtedly unlock opportunities for the forest-dependent backward tribes of India”.

The nomination of Draupadi Murmu for the presidency is a meticulously crafted masterstroke by Prime Minister Narendra Modi that caught the opposition flat-footed.

Murmu’s nomination, and now her victory is seen as a triumph of political aspirations and a breakthrough moment for the Santhal community, which is celebrating the rise of its “daughter-in-law”.

There is a persistent and unwavering hope that the election of Draupadi Murmu can change the life of the tribal people for the better.

Ms Murmu initially worked in the government’s Irrigation and Power Department and then switched-over to teaching before entering politics. In her enthusiastic pursuit of a cause to work for the empowerment of the oppressed, she has often asked for clarifications in the past on how several designated Bills would benefit the tribal people.

Her journey to this position has been protracted and symbolic of the struggle of the tribal people to find space in the political imagery of the nation, says Nistula Hebbar in her piece on why Ms Murmu will not be a “mere rubber stamp.”

The election of Draupadi Murmu to the higher echelons of governance single-handedly signifies a victory for Prime Minister Narendra Modi in his valiant effort to bring together various communities under the ambitious Hindutva programme.

The Hindu newspaper, in one of its editorials last week, stated:

The victory, rich in symbolism and a moment of political triumph for the ruling NDA, is “a milestone in the journey of tribal empowerment, though she is by no means limited to her tribal identity. It is a moment of pride for India.”

Has the move by Prime Minister Narendra Modi to nominate Draupadi Murmu sent the concerted efforts of the opposition into total disarray?

Nevertheless, he has cast it upon himself to prove his genuine and sincere efforts to reach out to them to address perennial issues that they endured.

The thinking among the most political blocks in the country appeared to be more progressive than conventional that it would not be politically correct or prudent to vote against the most marginalized community in India, the tribal people.

It is an arduous trek before achieving the goals of the tribal population that borders on a hefty amount of 104 million. Since 1950 the government facilitated them with places in central and state governments and educational institutions to cater to their needs. However, the population remained stagnated without much hope.

There are over 700 tribal communities in India.

Today they have a glimpse of hope in the democratic institutions after Prime Minister Narendra Modi characteristically chalked out modalities and fundamental changes in its approach to nominating a tribal lady to contest the top slot and her subsequent victory.

Many described it as an unparalleled feat in the contemporary political history of India. Media reports say that even today, the native village of Draupadi Murmu in the Mayurbhanj district of Odisha is without electricity.

However, the Odisha government last week started the electrification work in a portion of Uparbeda, the ancestral village of National Democratic Alliance presidential candidate Draupadi Murmu, in the Mayurbhanj district. It is a sequel to media reports that surfaced that the people in the area were without electricity. However, Murmu is not living in that village now. She has shifted to Rairangpur, a municipal town which is around 20 kilometres away from her native village Dungurisahi of Uparbeda.

As the results of the Indian Presidential election came on air with the election of Draupadi Murmu as the 15th President of India, the native village of Ms Murmu went into frenzy with celebrations.

The spirits of the tribal people ran high with the elevation of Draupadi Marmu to the Presidency, and it appears that Prime Minister Narendra Modi is on the right path and direction in harnessing the potential of an untapped block of people in a political sense.

He may soon become the champion of rural India who had come out of his high position to help the poor to find their way to the top.