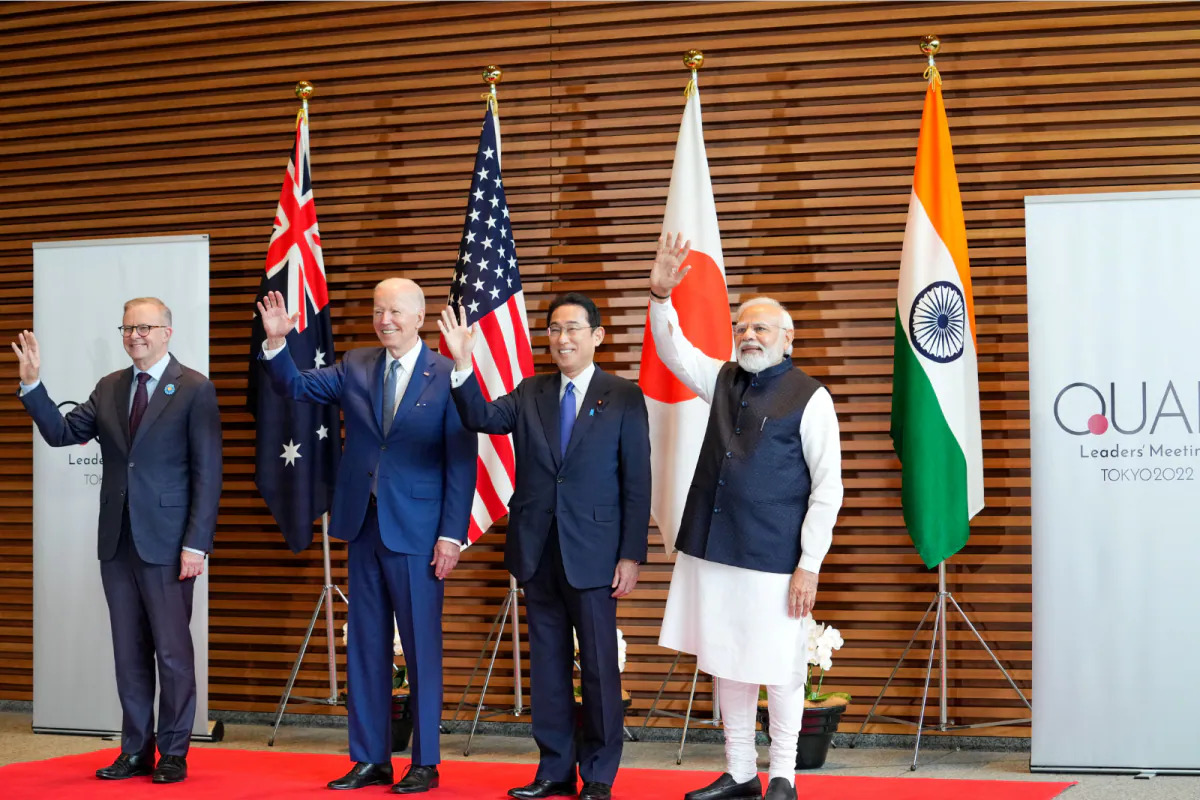 India plays a crucial role in creating food parks across the country. India has ventured into a new alliance with Israel, the United States and the United Arab Emirates (UAE), dubbed the West Asian -Quad or I2U2. The I2U2 came together as a sequel to the momentum created by the Abraham Accords — initiated by the Trump administration of the United States to regularize ties between Israel and Arab countries.

The objective is to formulate a joint venture partnership on storage facilities for energy renewable and a hybrid system to harness solar and wind power and create food corridors to face the emerging global crisis successfully.

It brought together four key world leaders, including Prime Ministers of India and Israel Narendra Modi and Yair Lapid, with United States President Joe Biden and President Mohammed bin Zayed al Nahyan of the United Arab Emirates. However, there is speculation as to whether the Chinese factor was dominant in bringing together the West Asian Quad.

Several analysts question whether the I2U2 reflects similar objectives to the Quad already in existence in the Indo -Pacific region. The Indian government news portal said, “The I2U2 concept and the idea became a reality during the meeting of the Foreign Ministers of the four countries held in October 2021”. Each country also had Sherpa-level interactions regularly to discuss the possible areas of cooperation.

The objective of the I2U2 is to encourage joint investments in six mutually identified areas such as water, energy, transportation, space, health, and food security.

It intends to attract private sector capital and expertise to help bring in modern technology to develop the infrastructure, and low carbon development pathways for industries, improve public health and promote the development of critical emerging and green technologies.

The new alliance is critically important against the backdrop of the global recession with increasingly high economic and political risks coupled with soaring fuel and food prices.

Talmiz Ahmed, former Indian ambassador to Saudi Arabia, Oman and the UAE, has reportedly told the media that it would be difficult to surmise what would work for the countries since the world is in turmoil. The countries are teaming together and hedging their bets.

In particular, he had told Al-Jazera, with the world in turmoil, no one knows what will work. So countries are hedging their bets and joining and forming groups that they think will work best for them.

India will provide suitable land for food parks across the country that will come into being in collaboration with Israel, the United States and the United Arab Emirates.

The Joint Statement of the I2U2 leaders outlined a plan for integrated food parks across India. The leaders of the I2U2 grouping – India, Israel, the UAE and the USA – announced on Thursday that they would bring in private capital for specific projects in the fields of water, energy, transportation, health, space and food security. The food parks aimed at cutting down food waste and spoilage are a few of the collaborations that the four countries declared.

At the outset of the summit, Sheikh Al Nahyan hinted at the commitment of the United Arab Emirates to the food parks.

He said, we also believe that only partnership can overcome current conflicts and overlapping challenges, the most important of which are food and energy security, climate change and healthcare. The first programme of our team focused on food, climate-smart agriculture, solar and wind energy and energy storage.

The Prime Minister said that I2U2 has set in motion a positive plan from the very first summit, and by combining the technological skills of the nations, they can come together for the good of humanity.

Addressing the First I2U2 Summit in a virtual format, the Prime Minister said they would work towards ensuring food security and propelling development initiatives globally.

The Prime Minister added that they have, identified joint projects in many areas and a roadmap devised to move forward.

He stressed this cooperative framework is a good model for practical cooperation in the face of increasing global uncertainties.

He expressed confidence that I2U2 will make a notable contribution toward Energy Security, Food Security and Economic Growth globally.

UAE investors like the Dubai-based Emaar Group are likely to invest up to $5bn in mega food parks in India and another $2bn in contract farming, sourcing of agro commodities and related infrastructure.

While the idea of the corridor was mooted three years ago and aimed at ensuring food security for the UAE, briefing reporters last month in Washington, DC, the United States’ State Department Spokesperson Ned Price also underlined the economic agenda of the grouping.

Each of these countries is technological hub, “He said while India was also “a massive market. It is a massive consumer market”.

With all the leaders participating, the summit held on Thursday could be considered a move to institutionalize the so-called West Asian Quad. It will provide a framework that will help convert “government-to-government ideals into concrete programmes that will allow business-to-business interactions,” said Pramit Pal Chaudhuri, a fellow at the New Delhi-based think tank Ananta Aspen Centre, For instance, consider the potential announcement of a venture in renewable energy storage.

“The storage of energy generated from renewables is most critical. At present, there are no technologies for this. An Energy Ministry official who is not authorized to speak to the media said. He said that electricity generated from a renewable source was linked immediately to a grid without storing it. The new joint venture would look at critical storage technology, he said.

It could feed into India’s efforts to reach net-zero emissions by 2070, a goal announced by Prime Minister Modi in Glasgow, Scotland, last year.

At the end of the summit, the I2U2 leaders issued a joint statement.

The statement is as follows.

On July 14, 2022, we, the Heads of Government of India, Israel, the United Arab Emirates (UAE), and the United States, convened for the first leaders’ meeting of the “I2U2” Group.  This unique grouping of countries aims to harness the vibrancy of our societies and entrepreneurial spirit to tackle some of the greatest challenges confronting our world, with a particular focus on joint investments and new initiatives in water, energy, transportation, space, health, and food security.

We intend to mobilize private sector capital and expertise to modernize infrastructure, advance low carbon development pathways for our industries, improve public health and access to vaccines, advance physical connectivity between countries in the Middle East region, jointly create new solutions for waste treatment, explore joint financing opportunities, connect our startups to I2U2 investments, and promote the development of critical emerging and green technologies, all while ensuring near- and long-term food and energy security.

We reaffirm our support for the Abraham Accords and other peace and normalization arrangements with Israel.  We welcome the economic opportunities that flow from these historic developments, including for the advancement of economic cooperation in the Middle East and South Asia, and in particular for the promotion of sustainable investment amongst the I2U2 partners. We also welcome other new groupings of countries, such as the Negev Forum for regional cooperation, that recognize the unique contributions of each partner country, including Israel’s ability to serve as an innovation hub connecting new partners and hemispheres to strategically address challenges that are too great for any one country to manage alone.

To this end, the I2U2 leaders highlighted the following initiatives:

The UAE – home to the International Renewable Energy Agency (IRENA) and host of COP28 in 2023 – will invest USD 2 billion to develop a series of integrated food parks across India that will incorporate state-of-the-art climate-smart technologies to reduce food waste and spoilage, conserve fresh water, and employ renewable energy sources.

India will provide appropriate land for the project and will facilitate farmers’ integration into the food parks.

U.S. and Israeli private sectors will be invited to lend their expertise and offer innovative solutions that contribute to the overall sustainability of the project.  These investments will help maximize crop yields and, in turn, help tackle food insecurity in South Asia and the Middle East.

The I2U2 Group will advance a hybrid renewable energy project in India’s Gujarat State consisting of 300 megawatts (MW) of wind and solar capacity complemented by a battery energy storage system.  The U.S. Trade and Development Agency funded a feasibility study for the USD 330 million projects.  UAE-based companies are exploring opportunities to serve as critical knowledge and investment partners.  Israel and the United States intend to work with the UAE and India to highlight private sector opportunities.  Indian companies are keen to participate in this project and contribute to India’s goal of achieving 500 GW of non-fossil fuel capacity by 2030.  Such projects have the potential to make India a global hub for alternate supply chains in the renewable energy sector.

The leaders expressed their determination to leverage well-established markets to build more innovative, inclusive, and science-based solutions to enhance food security and sustainable food systems.  The leaders also welcomed India’s interest in joining the United States, the UAE, and Israel in the Agriculture Innovation Mission for Climate initiative (AIM for Climate).  They affirmed that these are only the first steps in a long-term strategic partnership to promote initiatives and investments that improve the movement of people and goods across hemispheres and increase sustainability and resilience through collaborative science and technology partnerships.

Inputs from Indian Media Al-Jazeera and from other sources