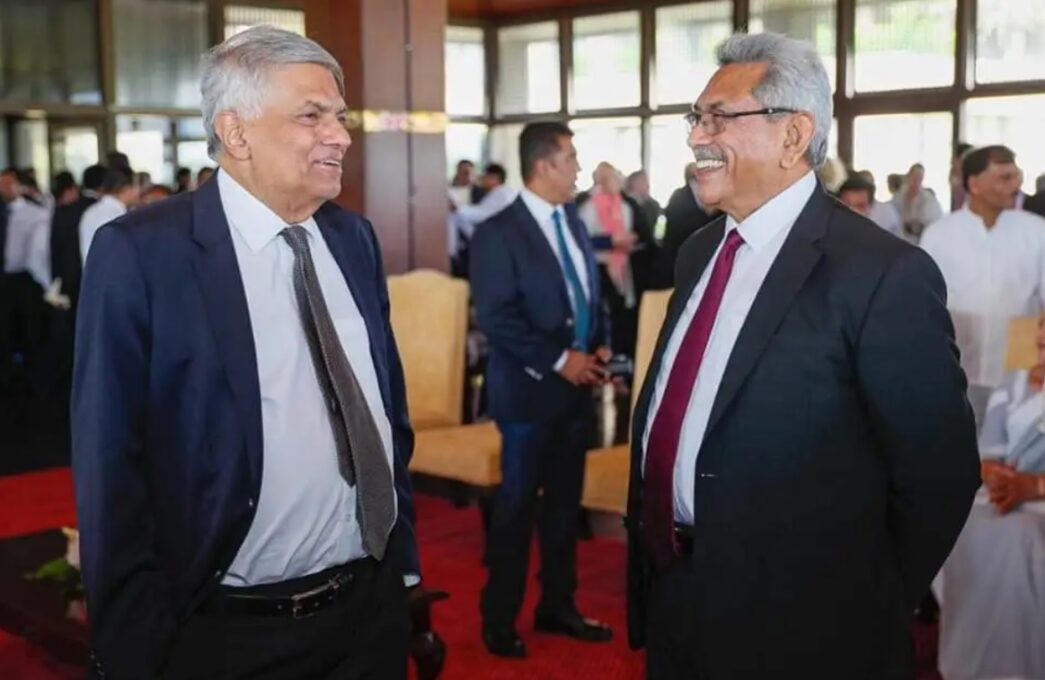 Unending sporadic incidents of targeted killing in which vehicle-bound gunmen take out individuals on the streets across the Sinhala South, unthinking mismanagement of the distribution of available fuel among emergency staff in hospitals and elsewhere reported from across the country, and such other episodes, day in and day out have created a spectre of a ‘government sans governance’. It has continued through the past weeks, especially after 9 May, when Prime Minister Mahinda Rajapaksa’s resignation triggered unacceptable violence against peaceful anti-Rajapaksa protestors, followed by unprecedented arson, only hours later – as if the latter at least was pre-planned.

Now comes senior minister Dinesh Gunawardena’s recall of his post-9/5 parliamentary statement how the drones flying over his home days prior to the arson incident might have been used to map the area. The minister is shocked how the army detail, posted not faraway from his house, had not tried to stop the arson or put out the fire. He is even more curious why neither the police, nor the security forces had not quizzed him over his parliamentary statement.

Such has been the common refrain from most, if not all victims of the 9 May arson that targeted 78 ruling party politicians, from President Gotabaya Rajapaksa and outgoing Prime Minister Mahinda downwards. The police claim to be making hundreds of arrests relating to these incidents, including in the case of the brutal murder of a ruling party MP, which was also deftly sought to be passed off as suicide. The police, rather the doctors performing the post mortem examination on the parliamentarian’s body and that of his police guard, for unravelling the truth, through provable evidence.

Yet, no one in the government, President and Prime Minister Ranil Wickremesinghe downwards, nor the security top brass, be it in the tri-Services or the police, seem to have investigated the reason(s) behind their men sitting tight when Sri Lanka was burning. Who gave the instructions, if any, for them not to act? Or, were the men on the ground so very frustrated by their own economic doom – which was only half their present plight, which they did not know – that they too wanted the political class ‘punished’?

These are questions that require early answers and correctives if it’s not to be repeated with the same or greater vehemence, now or a lil’ later. Th reasons are not far to seek. JVP leader Anura Kumara Dissanayake’s declaration that the ‘final solution is with the people’ sounds eerie. He may not have meant anything wrong or evil, but as an ideology-oriented politician, AKD should have known what phrases like ‘final solution’ and the role of the people in it could mean – when viewed from a non-democratic perception. It’s more so after the 9 May arson.

The nation still has to thank the man on the street for maintaining his sanity at current levels. It can only hope that it stays that way, without any help from the government. Instead, there is the daily dose of provocation(s) from the government, furthering failed governance issues. Nothing explains this better than the less-publicised claims of the state sector Ceylon Petroleum Corporation (CPC) why they did not place fresh fuel orders when the Treasury had allocated enough funds. Today’s non-availability of fuel across the country owes to their claims of avoiding high premiums – but no one has been held accountable, at least not thus far.

These are all multiple elements of a government without governance. Ironically, all these are also going to impact on the evaluation of foreign aid-givers, beginning with the IMF, if and when they decide to reach out beyond the words, which alone most of them are offering just now. The Indian neighbour may be an exception, as the nation sees it as a humanitarian assistance. India has taken it upon itself as a part of the larger national concept of ‘Vasudaiva Kudumbakam’ (Sanskrit) and ‘Yaarum Oore, Yavarum Kelir’ (Tamil), both meaning, ‘The world is one family’.

The question is if the government leadership at least is ready even at this late hour, to face the tougher times ahead, before things turn for the better, hopefully? The current indications are that the government has no clue about how to handle the situation. – or the inevitabilities that lie ahead.

The world over, for instance, every thought of oil makes people think only of the Gulf-Arab nations. Possibly because the Rajapaksas had a lot of explanations to offer on the alleged harassment of the nation’s Muslims under their regime, the government has thus far shied away from approaching the likes of Qatar, Saudi Arabia and the UAE, until now.

Sheepishly, the government has now lifted the ban on Qatar Charity, which was banned for allegedly financing Islamic extremist groups in the country as a follow-up to the 2019 ‘Easter blasts’. The Catholic Church, which has got itself politicised, since, extending its reach and out-reach to cover issues of economic mismanagement – which it had better left to the political and the academic class to sort out.

It is anybody’s guess how an international NGO like the Transparency International  (TI), or its Sri Lanka chapter, thought it fit to move the Supreme Court, seeking to fix responsibility for the economic mismanagement – which charge, of course, cannot be denied. It is unclear if the TI chapter provides for such contested and complicated initiatives. If so, the question arises why the TI was slow in doing so, as such an initiative would have served the nation better if taken at the breakout of the economic crisis a few months back.

Even today, other civil society groups in the country are silent on doing anything legal or legalistic about it. Inspired from outside – by the likes of ‘Arab Spring’ and ‘Orange Revolution’, that is – they had hijacked what was the political Opposition’s job, and launched public protests of the ‘GotaGoHome’ kind. Once, Prime Minister Mahinda Rajapaksa quit, they seemed to have lost steam.

Today, when the call is for not only President Gota but also the new Prime Minister, Ranil Wickremesinghe, to quit, the protest-organisers are unable to generate as much enthusiasm in the common man, to take to the streets. Even the Opposition SJB / JVP calls for revived protests talk only about an indeterminable future date – and thank them for it. They too seem to be unsure if and when the people would turn against the political class as a whole – as it have all commenced, not very long ago.

All of it can wait. The immediate question is what minister Gunawardena has done as a senior politician in the government grouping, both inside and outside Parliament, to unravel what he claimed to be a ‘wider conspiracy’. If he has stopped with such public statements and parliamentary speeches, then it is either a sign of his irresponsibility, or helplessness, or both.

This is particularly so in a nation that is still trying to live down the nightmarish memories of two JVP insurgencies as much as that of LTTE terrorism, which was both long drawn-out and worse. For the record, the present-day JVP is the mainstreamed, democratised version of the insurgent group from the past – but elements still lie outside.

The economic crises and the political failures behind it all have only exacerbated the compulsions for a ‘third uprising’, which is being freely mentioned in the social media, especially in the Sinhala South, more than anytime in recent years. Yet, a President credited with giving the tactical leadership to the armed forces at the height of the conclusive Eelam War IV against the LTTE, too, seems to be either clueless or he too has been overwhelmed.

If nothing else, this is not the man the nation had voted in as President only months after the Easter blasts, which brought back shocking memories of the LTTE terrorism, if only to stop them all on the track and restore the nation’s confidence and faith in itself. Today, he is as much a failed man in the area of his professional expertise as in the unknown field of economics and agriculture, where he dabbled with overnight shift to organic farming, as if to feed the Chinese suppliers than the nation’s population, farmers included.

But then what has the Opposition to offer? Other than calling for Gota, and now, Ranil, too, to quit, they have nothing to say on what next. Unthinking intellectual forums too have joined the chorus. Under this Constitution, if the President quits, then the Prime Minister stands in for him until Parliament elects another for the residual term.

The ruling SLPP combine still controls Parliament. The arson episode that targeted many of them may have only strengthened their resolve to stay together. So, in the place of Gota, you may get Chamal or Namal, or Dinesh Gunawardena back – if they all do not endorse Ranil for the nation’s top-most job!

And thereby hangs a tale!