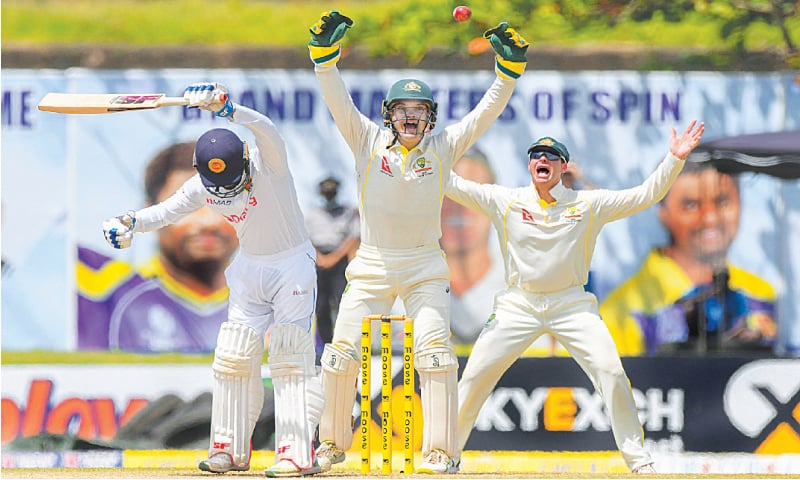 Spinner Nathan Lyon starred with a match haul of nine wickets as Australia wrapped up the opening Test on Friday with a crushing victory over Sri Lanka before lunch on the third day.

The hosts were bundled out for 113 in their second innings allowing the Australians to seal a 10-wicket victory in their first over back at the crease in Galle.

Lyon, whose five-for helped bowl out Sri Lanka for 212 in the first innings, and fellow spinner Travis Head took four wickets each to send the hosts packing before the morning was over.

It was a huge victory for Australia, who suffered a 3-0 whitewash in Sri Lanka on their last tour in 2016.

“Amazing win. Turning up this morning I didn’t think it was going to happen that fast,” skipper Pat Cummins said.

“Really proud of the squad. It’s really foreign conditions for us.”

Opener Usman Khawaja (71) and Cameron Green (77) stood out in Australia’s first innings effort of 321 that made them take control in extreme spin conditions.

Green put on crucial partnerships with Khawaja and then wicket-keeper/batter Alex Carey, who made 45, to handle the spinners with aplomb. “Players go through their whole careers looking for a method in these conditions, and in his first knock he’s found it,” Cummins said of the 23-year-old Green who was named man of the match.

“Really happy for him, he was the difference.”

While Green was part of the Australia side who triumphed 1-0 in Pakistan earlier this year, conditions were vastly different in Galle where the ball turned viciously and touring spinners claimed all 10 Sri Lanka wickets in the second innings.

Green said it was a special knock considering the conditions.

“Playing in the sub-continent you’ve got a few unknowns how to go about it but there are a lot of experienced guys in the change-room, a few guys I can talk to to get a really good idea before I go out there,” the 23-year-old said.

On a wicket where only three batters managed half-centuries and none could convert them into a hundred, Green said senior players advised him not to retreat into his shell.

“A few guys said just to be proactive. If you go out there just defending, you get yourself in trouble. Looking to score is how you give yourself the best chance,” he said.

“You’re going to get out at some point so you might as well play some shots.”

Sri Lanka suffered a blow before play began when Angelo Mathews was ruled out due to Covid-19, with Oshada Fernando named his replacement.

Skipper Dimuth Karunaratne started strong, smashing four boundaries in the 17-run first over of the innings off Mitchell Starc.

Lyon got skipper Karunaratne caught behind for 23 after just 20 balls while Swepson trapped Pathum Nissanka lbw for 14.

The leg-spinner then got Oshada caught out in the 12th over as Sri Lanka slipped to 63-4.

Head, a left-handed batter and an occasional spinner, struck twice in his first over to claim Dinesh Chandimal — his first Test scalp — and Dhananjaya de Silva.

Swashbuckling opener David Warner brought an easy finish to formalities, hitting a four and a six off Ramesh Mendis to bring up the win in four balls.

Earlier in the day, fast bowler Asitha Fernando took Australia’s last two first-innings wickets with the tourists adding eight to their overnight 313, for a commanding lead of 109.

The second and final Test begins on July 8 at the same venue. (Courtesy Dawn)