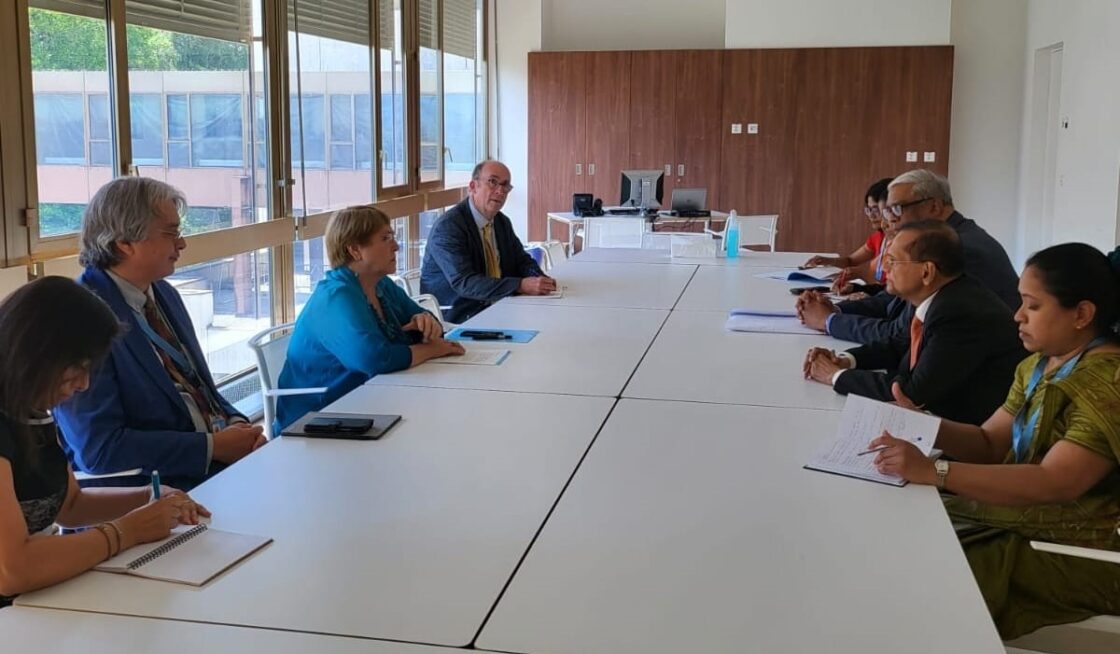 Minister of Foreign Affairs Prof. G.L. Peiris met the High Commissioner as well as the Secretary General of the International Federation of the Red Cross and the Permanent Representatives of China, the European Union, Australia, Republic of Korea, Germany, Netherlands and Jordan in Geneva on the sidelines of the 50th session of the UN Human Rights Council.

At the meeting with Michelle Bachelet, Minister Peiris assured the High Commissioner of Sri Lanka’s continued active engagement with the international system including the Human Rights Council, in a candid and transparent manner. The Foreign Minister also described in detail the results achieved on the ground by local mechanisms including the Office of Missing Persons, the Office for Reparations, the Office for National Unity and Reconciliation, the SDG Council as well as independent institutions such as the Human Rights Commission of Sri Lanka.

Foreign Minister Peiris informed the High Commissioner that the invitation to undertake an official visit to Sri Lanka extended previously, still stands. He also wished her well on her upcoming retirement, announced at the beginning of the current session.

At the meeting with Ambassador Chen Xu, Permanent Representative of China, the Foreign Minister thanked China for the continuous support extended to Sri Lanka over the years. Discussing the economic challenges facing the country, particularly issues relating to foreign reserves and their impact on food and energy security, Minister Peiris expressed appreciation for the substantial quantities of food, pharmaceutical items and COVID-19 vaccines provided by China. Reference was made to the long standing and friendly relationship between the two countries and the expectation of further strengthening the ties in the future.

At the meeting with Jagan Chapagain, the Secretary General of the International Federation of the Red Cross, Minister Peiris requested for the delivery of medicines and healthcare equipment to Sri Lanka as a matter of priority. In his discussion with Ambassador Lotte Knudsen, the Permanent Observer of the European Union, the Foreign Minister highlighted the importance of economic diplomacy, including trade, investment and tourism.