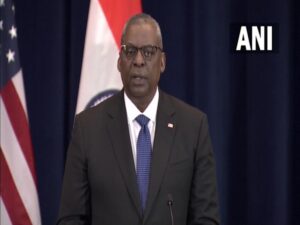 “The PRC’s (People’s Republic of China) moves to threaten to undermine security, and stability, and prosperity in the Indo-Pacific,” Austin said while referring to the country by its official name.

Pledging to support Taiwan in the face of growing Chinese assertiveness, he said “We remain firmly committed to our longstanding one-China policy–guided by the Taiwan Relations Act, the three Joint Communiques, and the Six Assurances. We categorically oppose any unilateral changes to the status quo from either side.”

“Now, as part of our one-China policy, we’ll continue to fulfill our commitments under the Taiwan Relations Act. That includes assisting Taiwan in maintaining a sufficient self-defence capability. And it means maintaining our own capacity to resist any use of force or other forms of coercion that would jeopardize the security or the social or economic system of the people of Taiwan,” he added.

The US defence chief also emphasized that Washington is working closely with China’s military leaders to fully open lines of communications to avoid miscalculations between both countries.

“So we’re working closely with both our competitors and our friends to strengthen the guardrails against conflict,” Austin said. “That includes fully open lines of communication with China’s defence leaders to ensure that we can avoid any miscalculations.”

In the major speech at the defence forum, the US defence chief also laid emphasis on a free and open Indo-Pacific, which he said was at the heart of American national security strategies, and the power of the partnerships that regional nations have built with the United States forms the core of a peaceful and prosperous world for all.

American strategists no longer talk about the “US pivot to Asia.” That has happened. On the military side, Austin noted that the Indo-Pacific is Washington’s “priority theater” with more than 300,000 American service members in the region working with allies and partners to ensure the rules-based international order is maintained.

The Indo-Pacific is at the heart of this interconnected world and events halfway around the world resonate throughout the region, Austin said while pointing to the unprovoked invasion of Ukraine by Russia as one of those events.
The defence secretary said that Russian President Vladimir Putin’s “reckless war of choice has reminded us all of the dangers of undercutting an international order rooted in rules and respect.” (ANI)