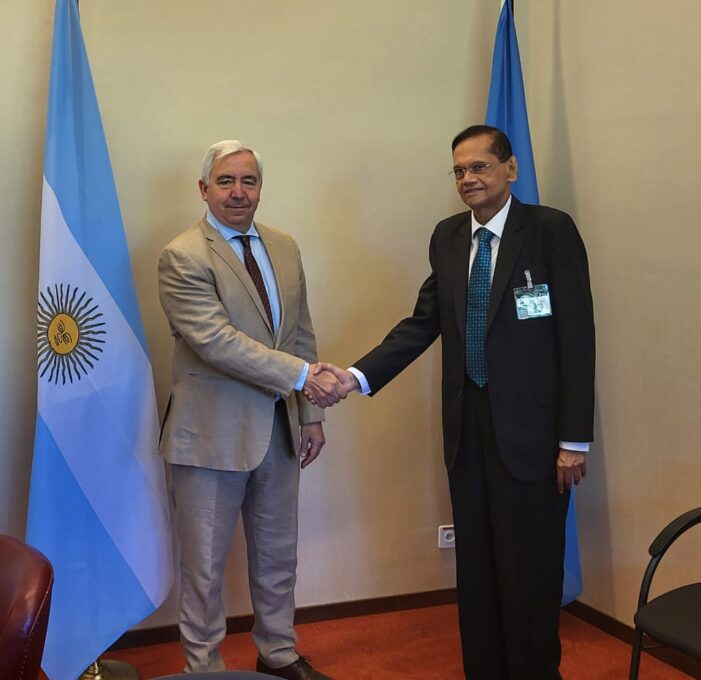 Sri Lanka has sought the empathy and understanding of the international community.

Minister of Foreign Affairs Prof. G.L. Peiris, held meetings with the President of the Human Rights Council (HRC), the Coordinator of the Non-Aligned Movement (Geneva Chapter) and the Permanent Representative of Brazil in Geneva on 14 June 2022, on the sidelines of the 50th Session of the HRC.

During the meeting with the President of the Human Rights Council, and Permanent Representative of Argentina, Federico Villegas, the Foreign Minister briefed on the current socio-economic situation in Sri Lanka and the need for empathy and understanding of the international community.

Whilst stressing the need for space for the country to deal with the present socio-economic issues, he reiterated the political will and resolve to deal with obligations and move ahead.

In this respect, the Foreign Minister highlighted the measurable and verifiable progress made, including with regard to amending the Prevention of Terrorism Act and the proposed 21st Amendment to the Constitution, as well as strengthening independent commissions, the work of the Office for National Unity and Reconciliation, the Office on Missing Persons, the Office for Reparations and engagement with civil society.

Noting that all countries go through difficult periods in their history and that each specific case requires a different approach, the President of the Human Rights Council expressed his willingness to assist Sri Lanka in this respect. He added that his role as the President of the HRC was one of bridge – building and to promote dialogue with every country and every mandate. Sri Lanka could avail of the assistance and expertise of the HRC Presidency as well as the experience of Argentina from which South Africa too had benefitted.

During the meeting with the Coordinator of the Non – Aligned Movement (Geneva Chapter), the Permanent Representative of Azerbaijan, Galib Israfilov, where he referred to Sri Lanka’s longstanding and robust relations with the Non-Aligned Movement, the Minister stressed the continued relevance of NAM values and solidarity in order to face contemporary challenges. He requested greater revitalizing of the Non-Aligned Movement and assured of Sri Lanka’s continuing and active support to the Movement.

Ambassador Israfilov briefed on the NAM activities over the last few years, including on equitable access to vaccines, diagnostics and therapeutics during the pandemic, on post pandemic recovery efforts, in the security sector, parliamentary dialogue through the Inter Parliamentary Union and to foster dialogue in the Human Rights Council on matters such as the Right to Development. Outlining future initiatives, he re-iterated Azerbaijan’s commitment and continuing efforts to raise the profile of NAM with the active support of Member States.