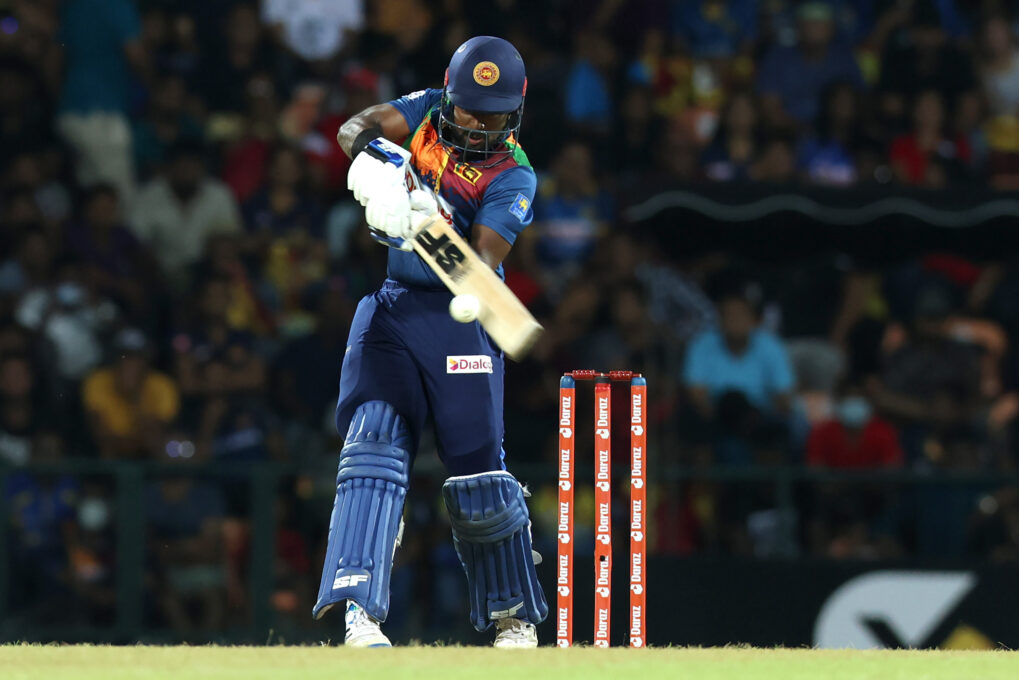 Dasun Shanaka’s magnificent knock of 54* off just 25 balls helped Sri Lanka to a four-wicket win in the final over of the third T20I. Australia take the series 2-1.

With the series in the bag with two wins, Australia opted to bat after winning their third toss in a row.

Both teams rung in a change each – Praveen Jayawickrama replaced Nuwan Thushara for Sri Lanka while Josh Inglis made the XI in place of Mitchell Marsh, who was out with a minor calf strain.

David Warner was slow to get off the blocks for Australia but Aaron Finch made up for his partner’s slow start. He welcomed Dushmantha Chameera into the bowling with two fours in his first over and dished out the same treatment to Maheesh Theekshana in his next.

The change of ends didn’t help Chameera, though it did with Theekshana. Finch and Warner accumulated a boundary each in the penultimate over of the Powerplay but the spinner broke through for his side, ending the Aussie skipper’s entertaining knock of 29 from 20 balls.

Maxwell sent the ball into the stands off his second ball while Warner broke loose after the end of fielding restrictions. The three overs after the Powerplay fetched 33 runs.

It looked like Australia were going to set a massive total for Sri Lanka to chase down but the hosts were not going down without a fight. Wanindu Hasaranga got the big wicket of Maxwell, who picked the googly but failed to gain the elevation for a maximum.

Off the very next ball, DRS came to Sri Lanka’s rescue as Theekshana trapped Warner in front of the stumps for 39. Inglis, who was drafted into the XI for the game, was run-out for a first-ball duck, making it three wickets in three balls for Sri Lanka.

Sri Lanka tightened the screws in the middle overs, with overs 9-15 accounting for three wickets while giving away only one boundary.

Marcus Stoinis took on Praveen Jayawickrama with a six and two boundaries but the spinner had the last laugh off the final ball of the over.

Despite a flurry of wickets that fell in the middle, Australia set Sri Lanka a challenging target of 177, thanks to Steve Smith’s 27-ball 37* and a couple of boundaries from Matthew Wade in the death.

Sri Lanka started with a bang, getting 11 runs off the first over. They kept the scorecard ticking with Danushka Gunathilaka getting in some good shots. The opening partnership of 25 was broken at the beginning of the fourth over with Josh Hazlewood removing Gunathilaka for 15.

Charith Asalanka kept up the scoring rate and along with Pathum Nissanka helped bring up Sri Lanka’s fifty with a four on the first ball of the seventh over. His resistance ended when Stoinis got him for 26, breaking the fledgling 42-run stand.

At the halfway mark, Sri Lanka needed 100 more to win.

Stoinis got Nissanka in the 11th over and Bhanuka Rajapaksa fell to Ashton Agar two overs later. Hazlewood got Kusal Mendis in the over after that and Jhye Richardson brought the end to Hasaranga’s patchy innings as Sri Lanka slipped to 108/6 in the 16th over.

A true captain’s knock from Dasun Shanaka completely outfoxed the opposition bowlers as Sri Lanka registered a final-over victory in the the third T20I.

With 59 needed in the final three overs, the hosts had a tough ask ahead of themselves. But Shanaka, refusing to give up, put up a brilliant display of batting, taking the Australia bowlers to the cleaners. After Chamika Karunaratne gave Shanaka the strike with a single off Hazlewood, the Lanka captain smashed two sixes and two fours in quick succession to the cheers of the crowd.

The equation read 37 in 12 balls and Shanaka this time pounced on Jhye Richardson to slam more runs. A six and two fours came in the penultimate over to leave Sri Lanka 19 off the final one to make it home.

Kane Richardson started the last over nervously with two wides, a couple of singles later and with 15 needed off four, Shanka hit back to back fours and a six to ease off the pressure, bringing up a superb fifty and ultimately leading the hosts to an exhilarating win.

Australia, however, took the series 2-1.