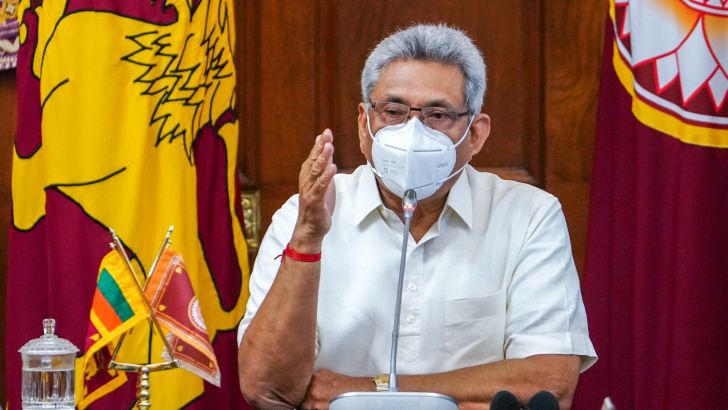 Going by what’s on hand, it is becoming increasingly doubtful if the much-hyped 21-A will end/suspend all political debate centred on the Executive Presidency and let the nation focus near-exclusively on the real task on hand, namely, economic recovery. This is because the politicos are discussing what they can do over 21-A in and through Parliament, but the mass-protestors in Galle Face Green’s GotaGoGama G-3 ‘village’ that triggered political correctives through the past months have not given up an inch on their allied demand for the exit of President Gotabaya Rajapaksa.

This gives the impression that the faceless leadership of the G-3 protestors are now inflicting an incremental corrective on the political Establishment as a whole. The message is simple: ‘You do what you can on our demands. We will do what we should continue to do.’ Such a course can have debilitating effect on the nation’s depleted reserves, not necessarily of the economic kind.

Maybe, it’s time the political class, starting especially with Prime Minister Ranil Wickremesinghe and his torch-bearers in this Cabinet, should acknowledge that they are being out-witted by those behind Sri Lanka’s very own ‘Arab Spring’. That they are a class apart, and not your usual kind of leaders that Ranil has had the habit and experience in out-smarting.

President Gota, who had goofed it up at every stage, too seems to be playing it along without possibly understanding the game being played out in the open. The Opposition SJB and the rest are all are also caught in a time-warp that they have not been able to accept that they too are going to be victims, not victors, in the end.

What is needed now is not 21-A, or not 21-A alone, but a composite strategy that the traditional political class in the country should put together, work together and win together, it they all have to remain relevant now and ever. No, this does not mean that they should continue with their past ways, which the new-generation in particular frown upon.

But they need to work together to ensure that the Constitution-centric democratic processes and credentials prevailed. If they failed themselves, then they are failing the nation, too. That way, 21-A should be a tool to keep the nation on the track. Any failure on either front would mean that the nation end in anarchy, with no one having any control over anything.

It is now becoming increasingly clear that both the political Opposition and also the protestors in GotaGoGama have no idea about the day-after, and/or what the day-after has in store, or what the day-after, they think, should and would usher in. They want the Rajapaksas out. They also want systemic changes. But in what is being made out, 21-A is the interim cure, if not the panacea. And the interim cure involves the continuance of President Gota but stripped of much of his so-called Executive powers, not without him.

The question is if the protestors, visible at the G-3 venue but possibly hiding behind the bushes all across the Sinhala South, are there to force the Establishment, starting with President Gota, to yield as much as it is possible to extract, on 21-A, or if they are going in for incremental kill with 21-A as only as the immediate next step, in many more to climb to reach where they want themselves and the nation, to be.

Behind the bushes, they are, because they seem to be having a romanticised view of their protests, as if it’s the only way, and the sure way to achieve permanent results. But not one of those speaking for the protestors, not one of the political leaders, whether from the government or the Opposition side, has set out what end-results they expect in the changed-character of the nation, the state structure, polity and society.

Everyone is happy, leaving it undefined as they have no clue what they want and how they want. They are only clear what they do not want.  The protest-leaders should know that after them, it would take another generation, or 30-40 years, for another ‘mass movement’, if not ‘revolution’ of their kind to emerge. Their focus should not stop with having theirs now, but to ensure even more that future generations won’t require theirs in their time. That does not seem to be happening.

Today, the nation’s sole focus should be on economic recovery. It is no more about shoring up dollars, making food, fuel and medicines, among others, available in the country, whichever be the way and whoever the donor/creditor. It goes beyond all that to ensure that every man, woman and child all across the country gets his daily meals, and also feels confident that he need not have to worry about the next day.

The national crisis has sunk in since. From personal anxiety over family incomes and food availability in the market, to a vague fear over what it meant for the nation as a whole, it has now come to a stage where the personal fear is returning slowly, surely and also firmly. It is a dangerous phase that the political class should be aware of and alive too.

The easiest way out for a shattered nation is to disown everything past and present. That is the easiest part. But to put together an all-embracing idea, concept and process for what’s in store is the most difficult thing. Sri Lanka did not have to do so any time in the past. Independence came almost without asking, unlike in the case of neighbouring India. Hence, the transition was as smooth as can be. One flag went down on the appointed day, 4 February 1948, and another came up.

Today’s problem is unlike anything of the kind. If anything, today’s twin politico-economic crisis, where the latter should get precedence, has put the ‘ethnic issue’ far behind as the acknowledged ‘national problem’. Today, the nation has become a problem for those whose nation it is. And they are the problem for the nation that they say is theirs.

Cojoining them in fine weave and juxtaposing them together is a fine art that the past generation did not have to try as much as they had to but thought they had done. The present generation, rather, the generation of the future, does not know where to end, but not how the begin.

All of it means that 21-A, whatever form it takes, need not be the beginning of the end. It could be the end of the beginning. But no one knows where the real end would come, and should come from. Not a comforting idea, this!