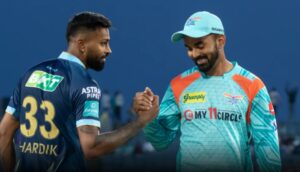 A Super Over would decide the result if any of the four IPL playoff matches – including the final – is disrupted by rain and no play is possible in regulation time. And in case the ground conditions continue to remain unplayable then the team standings during the league phase would determine the winner during the playoffs, according to an IPL briefing note.

Gujarat Titans will be facing Rajasthan Royals in Qualifier 1 at Eden Gardens on May 24 and Lucknow Super Giants will play against Royal Challengers Bangalore at the same venue the next day in the Eliminator. Teams will then move to Ahmedabad where the Qualifier 2 is scheduled on May 27 and the final two days later on May 29.

The IPL final will start at 8 pm, which is half an hour later than usual starting time. May 30 will be reserve day if the final is disrupted and cannot be finished for any reason on the actual scheduled date.

With inclement weather including showers forecast in Kolkata at least for the first of the week, the guidelines were sent to the four teams with a list of playing conditions that would be triggered in case the matches are affected by rain or any other reason.

An allowance of an extra two hours over the stipulated 200 minutes of match time has been added to the playing conditions, which were accessed by ESPNcricinfo. In case the start gets delayed, the first three playoff matches can start “as late as 9.40pm” while the final can begin at 10.10pm without any overs being lost. While the two strategic timeouts per innings will be retained, too, the only tweak – effected in case of a delayed start – would be the 20-minute mid-innings break being halved.

“The number of overs in the playoff match may, if necessary, be reduced so that each side has the opportunity to bat for five overs,” the guidelines said. There will be no timeouts for a five-overs-a-side game which will have a cut-off start time of four minutes before midnight (11.56pm) with a 10-minute innings break and a scheduled finish time of 12.50pm. In case the final is reduced a five-overs-a-side match, it would need to begin latest by 12.26am.

The guidelines further stated: “For the Eliminator and each Qualifier playoff matches (where there is no reserve day), in the event that it is not possible to schedule a five-over match to complete by the end of the extra time on the original day, the teams will, if conditions permit, play a Super Over to determine the winner of the relevant Eliminator or Qualifier match.” The IPL made it clear that Super Over would need to start at 12.50 am for these matches to finish.

In the scenario where the Super Over is also not possible, “the team that finished highest in the league table after the 70 matches of the regular season shall be declared the winner of the relevant playoff match or final.”

For the two Qualifiers and the Eliminator, which do not have a reserve day, if one innings is complete but the second is affected by rain with no play possible, the DLS method would be applied to determine the match result.

The IPL has also pointed out that in case the final started on May 29 (at least one ball is bowled), but was “not finished on the original day”, then the match would be wrapped on the reserve day. “The match will resume at the point where it stopped on the previous day. For the avoidance of doubt, any match recalculations done without the match actually restarting on the previous night will be ignored.”

In case where no play would be possible after toss in the final, teams would have a fresh toss on the reserve day. The IPL said the reserve day will comprise the same amount of playing time – five hours and 20 minutes including the two extra hours available in case of any disruption or rain.

Using the Super Over method to determine the winner in a rain-affected match is a first. Normally in T20Is, if five-overs-a-side option is not possible then the match is abandoned. The IPL made it clear that Super Over would need to start at 12.50am.

In case of final, the Super Over would need to start at 1.20 am. “For the final, in the event that it is not possible to schedule a five over match to be completed by the end of the extra time on the reserve day, the teams will, if conditions permit, play a Super Over to determine the winner of the final. This means that the pitch and ground must be ready for play so that the Super Over can start at the latest by 1.20am (final).” (ESPN Cricinfo)