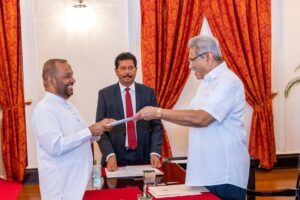 Mahinda Amaraweera took oaths as the Minister of Agriculture, Minister of Wildlife and Forest Conservation.

The SLFP had said last week that it did not support any of its MPs joining the Government. (Colombo Gazette)