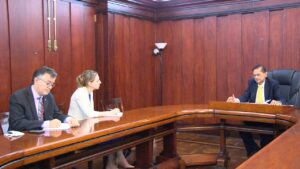 Sri Lanka has formally registered its strong protest and deep concern over the adoption of a motion in the Canadian Parliament on the alleged genocide of Tamils in Sri Lanka.

In a meeting with the Acting High Commissioner of Canada in Sri Lanka Amanda Strohan at the Foreign Ministry, Minister of Foreign Affairs Prof. G.L. Peiris categorically rejected the blatantly false content of the motion, and highlighted that its erroneous substance is fundamentally inconsistent with and contradicts the position of the Government of Canada that “it has not made a finding that there was genocide in Sri Lanka”.

Minister Peiris also pointed to the need for such technical terms with specific legal connotations to be used with caution and responsibility, as well as to the dangers of its seeming endorsement by any senior members of the Canadian Government, the Foreign Ministry said.

Considering the inaccurate and prejudicial nature of the motion, as well as the negative perceptions on Sri Lanka generated in the public domain as a result of such conduct, the Foreign Minister requested the Canadian Government to take appropriate action to correct the fallacies contained in the motion.  The latter request was conveyed in the context of the strong bilateral relations of over six decades existing between Sri Lanka and Canada.

In response, Acting High Commissioner Strohan referred to the non-binding, non-legislative nature of the private members’ motion adopted in the House of Commons of Canada.  She also agreed to convey the content of the démarche to the Department of Foreign Affairs, Trade and Development of Canada for appropriate action. (Colombo Gazette)