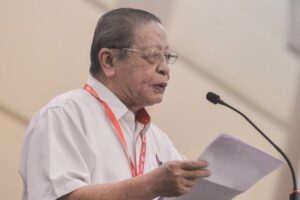 A veteran Malaysian politician has said that he is ready to go to prison if found guilty of improper use of network facilities for his statement warning Malaysia not to become like Sri Lanka.

The Malaysian Police have opened an investigation over a tweet by DAP veteran Lim Kit Siang that allegedly contained a statement that could threaten public order, Malay Mail reported.

“I have not incited anyone, any class or community of persons nor have I any intent to incite anyone, any class or community of persons. I have also not created or initiated any transmission which is “obscene, indecent, false, menacing or offensive in character with intent to annoy, abuse, threaten or harass another person”, but I am prepared to go to jail for warning Malaysians not to become another Sri Lanka,” the MP said.

Bukit Aman CID director Comm Datuk Seri Abd Jalil Hassan said police had detected a tweet that read “Will the houses of the prime minister and ministers of Malaysia be set on fire by angry protestors as happened in Sri Lanka last week?”.

A screenshot image of the tweet was also detected to have been transmitted through WhatsApp since it was uploaded on May 19.

Abd Jalil said investigations are being conducted by the Special Investigations Unit (D5), under Section 505 (c) of the Penal Code for issuing statements with intent to incite any group or race and Section 233 of the Communications and Multimedia Act 1998 for improper use of network facilities or network services.

Lim said his tweet was manipulated by “political desperados and opportunists” who twisted and distorted his statement.

Elaborating further on his remarks, Lim said Malaysia had lost out to South Korea, Singapore, Indonesia and China for the last half a century from 1970 to 2020, whether in terms of gross domestic product (GDP) growth or per capita GDP growth.

However, he said Sri Lanka had done worse than Malaysia during the same period.

He said in order to make Malaysia a world-class nation the country must return to the nation-building principles Malaysia was founded upon.

“If Najib loves Malaysia, he will contribute to this process of returning Malaysia to the founding nation-building principles our founding fathers, including his father, had agreed when Malaysia was founded — and helped remove the national scar where Malaysia was identified with “kleptocracy at its worst” worldwide.

“In these circumstances, there is nothing that Najib can do better than to just disappear from the political arena instead of trying to be Prime Minister again,” he added. (Malay Mail / Colombo Gazette)