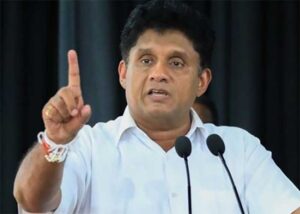 The Samagi Jana Balawegaya led by Sajith Premadasa has suspended the party membership of Harin Fernando and Manusha Nanayakkara.

Harin Fernando and Manusha Nanayakkara were suspended for joining the Cabinet today.

SJB MP Lakshman Kiriella had told Parliament earlier today that the two MPs did not have the support of the party to accept Cabinet posts.

He said the SJB had decided to support the Government without accepting Cabinet posts.

The SJB had said earlier that it will not accept Cabinet posts as long as Gotabaya Rajapaksa remains President. (Colombo Gazette)