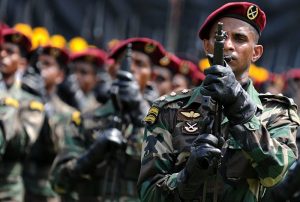 A number of troops were promoted today to mark 13 years since the defeat of the LTTE.

The Army said that a total of 396 Officers and 8110 Other Ranks were promoted to their next rank, with effect from today.

Chief of Defence Staff and Commander of the Army, General Shavendra Silva promoted them with the approval of President Gotabaya Rajapaksa, Commander-in-Chief of the Armed Forces and the Ministry of Defence.

The Navy said that 74 Navy officers and 2010 sailors were promoted by Commander of the Navy, Vice Admiral Nishantha Ulugetenne, with the approval of the Commander-in-Chief of the Armed Forces, President Gotabaya Rajapaksa.

The LTTE was defeated in May 2009 after 30 years of war in which thousands or civilians, troops and rebels were killed. (Colombo Gazette)