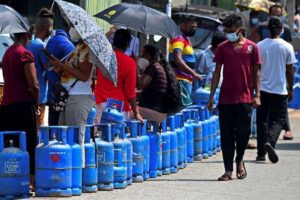 Protests were staged in a number of areas today demanding fuel and gas.

The Police said that protests were staged along the Borella – Maradana Road and Colombo – Negombo Road.

Litro Gas Lanka Limited had said today that there was a delay in unloading LP gas from a ship at the Colombo Port owing to adverse weather.

A payment had been made for the gas but the unloading has been delayed.

Meanwhile, Prime Minister Ranil Wickremesinghe had on Monday said that at the moment, Sri Lanka only has petrol stocks for a single day.

He said that due to a diesel shipment that arrived this week, the diesel lack of diesel will be resolved to some extent.

Under the Indian credit line, two more diesel shipments are due to arrive on the 18th May and 1st June. In addition, two petrol shipments are expected on 18th and 29th May.

For over 40 days 3 ships with crude oil and furnace oil have been anchored within the maritime zone of Sri Lanka.

The Prime Minister said that the Government is working to obtain dollars in the open market to pay for these shipments. (Colombo Gazette)