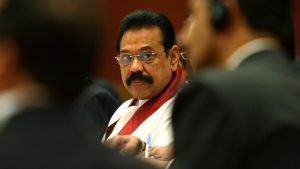 Both MPs were absent when their names were called for the vote to elect the new Deputy Speaker yesterday.

Mahinda Rajapaksa and Namal Rajapaksa were believed to be in hiding together with their families, following the mob violence last week.

Both were believed to have sought refuge at a Navy camp in Trincomalee.

A mob had attacked peaceful protesters near Temple Trees and at Galle Face after attending a meeting at Temple Trees with then Prime Minister Mahinda Rajapaksa.