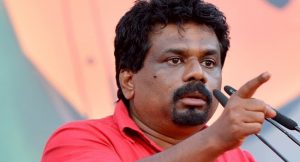 The Janatha Vimukthi Peramuna (JVP) today denied links to the revenge attacks on 9th May.

JVP Leader Anura Kumara Dissanayake told Parliament that the suspects arrested so far have no links to the JVP.

He also said that the JVP is prepared to face any investigation if there is evidence to prove they were involved in the attacks.

Sri Lanka Podujana Peramuna (SLPP) MP Arundika Fernando told Parliament that he was informed a number of JVP members were involved in the revenge attack on property belonging to SLPP MPs and their supporters.

Arundika Fernando told Parliament that Inspector General of Police (IGP) Chandana D. Wickramaratne informed him several JVP supporters were among over 400 suspects arrested over the incident.

He insisted that the JVP was not involved in the attacks on property belonging to Government MPs and their supporters on 9th May. (Colombo Gazette)