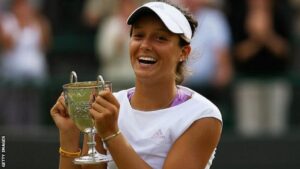 Laura Robson – the British player who won junior Wimbledon at 14 and an Olympic silver medal at 18 – has confirmed her retirement from tennis.

The 28-year-old rose to 27 in the world rankings, and reached the fourth round at Wimbledon and the US Open.

But then injury intervened – she had wrist surgery in 2014, and in recent years has had three hip operations.

“I went through every possibility of rehab and of surgery,” Robson told BBC Sport.

“I had another hip surgery and probably did the best rehab block of my life – I went to all the best specialists and had some incredible people that I was working with just to get me back on court – and then the second time I hit, I just knew.

“It feels weird to say out loud, but I’m done, I’m retired.

The LTA’s former chief medical officer Dr Jo Larkin and Rob Hill, who worked as a senior physiotherapist for many years, were a constant support for Robson and were with her when the doctors delivered the news she had been expecting.

“We just sat down and cried together, but I know they are going to be in my life forever,” she said.

Robson was named WTA Newcomer of the Year in 2012 as she beat Grand Slam champions Kim Clijsters and Li Na in a run to the fourth round of the US Open.

She also reached her only WTA final in Guangzhou that September (she was the first Briton to play in a WTA final for 22 years), and in early August partnered Andy Murray to a silver medal in the mixed doubles of the London Olympics. It was so nearly gold, but Victoria Azarenka and Max Myrni won the deciding tie-break 10-8 on Wimbledon’s Centre Court.

“I think I’m always going to have the feeling that I could have done more, unfortunately,” Robson said as she considered her career.

“I feel like if I had just had another year or two of being healthy, I don’t know what I could have achieved.

“But I’m really proud of the Olympics, of playing Fed Cup – playing for your country in any way was always one of my favourite weeks of the year – and I think playing Wimbledon and the US Open the time that I did well, I will have those memories forever.”

Robson’s run to the fourth round of Wimbledon came in 2013, five years after she had won the girls’ title at the age of just 14.

“The pictures that come up every year – I look so young. I can’t even remember half of the things that happened, I was a baby,” she says, and seems in no doubt the experience was overwhelmingly positive.

“It didn’t harm me in any way, and I think it was really exciting and it was the first time I played on a big stadium.

“And the things that it brought me in life – the year after being able to open show court two at Wimbledon in the main draw – I wouldn’t have had that opportunity had I not won the juniors.

“I think it opened my eyes to how tough it is, how much pressure was on my shoulders, and how to deal with tough things in your life. I wouldn’t take it back for anything.”

Watching Robson in full flow was often an exhilarating experience. She had a potent lefty serve, a forehand she struck powerfully from the back of the court (often with little margin for error), and in the relatively short time her body allowed, the former British number one showed a taste and a temperament for the big occasion.

What a huge shame, therefore, that her wrist first became a problem at almost exactly the age Emma Raducanu is now.

Robson says she does not feel cheated, and now feels at peace with the hand life dealt her.

“But that took a long, long time because it’s the difficulty of having it taken away from you rather than deciding yourself, as I would absolutely love to be out there still,” she says.

“But ultimately what’s happened has happened, and I think overall I’m a much nicer person from going through all of that.

“If I keep looking back and thinking ‘what if’, then I can’t move forward.” (Courtesy BBC)