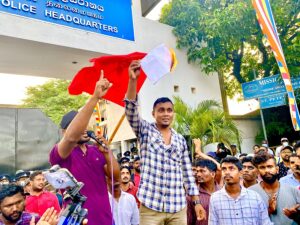 Several youth surrounded the Police Headquarters at Fort today and issued an ultimatum to the Police.

The youth attached to the Socialist Youth Union (SYU) demanded the arrest of those involved in the 9th May attack near Temple Trees and at Galle Face.

The SYU issued an ultimatum to the Police saying they will face the consequences if they fail to arrest the suspects within one week.

A tense situation also arose near the gates of the Police Headquarters when the youth demanded to meet the Inspector General of Police (IGP).

The IGP had sent one of his officers to meet the youth resulting in a tense situation.

The youth later dispersed even as the Police stood ready at a distance with tear gas and water cannons. (Colombo Gazette)