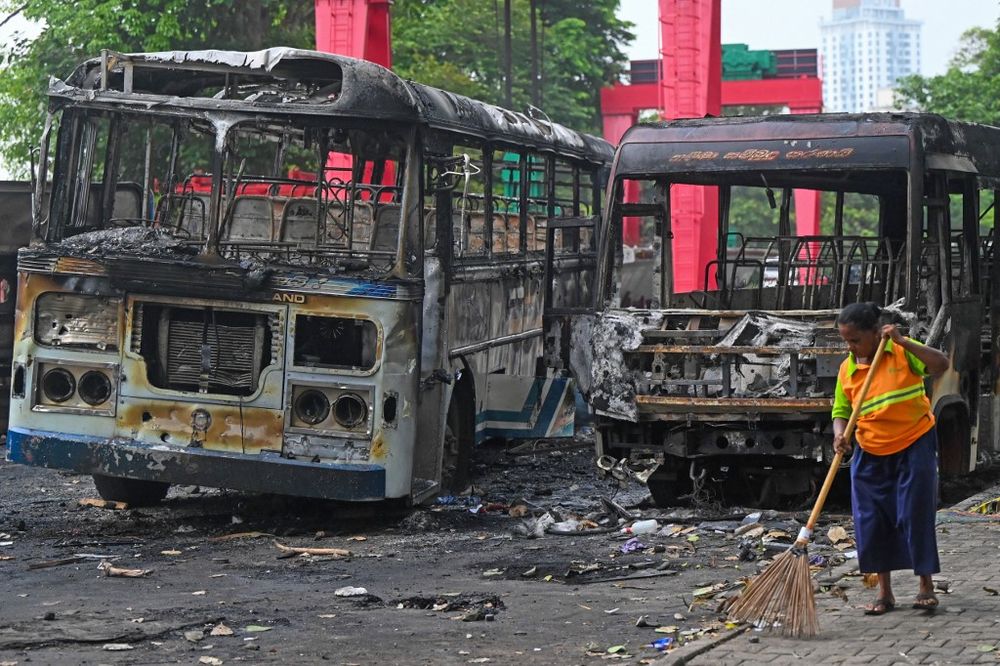 SHOCKING. While it is their ‘business’ to run down the Government over the proclamation of emergency and imposition of nation-wide curfew in the aftermath of 9 May ‘Monday Mayhem’, INGOs like Amnesty International and Human Rights Watch, not to leave out western embassies in Colombo, have taken next-to-nil note of the unprecedented arson that flowed from the pro-Mahinda goons targeted attacks on protestors who had purportedly forced his resignation and still wanted President Gotabaya Rajapaksa, too, to quit.

Worse still is the behaviour of the nation’s Human Rights Commission, which at least should have had equal value for the lives, limbs and property of the affected have politicians, however, bad they maybe in terms of corruption, nepotism and what not. Even the group of lawyers and others who moved the courts and obtained orders, barring former Prime Minister Mahinda Rajapaksa, his son and ex-minister Namal and fellow-traveller Johnston Fernando, and others, for the post-resignation violence that started it all, and for filing criminal cases against them for the riots, have said little or nothing about the day-night arson that followed. Equally so of the nation’s editorial writers and TV Talk-show commentators, who too have taken a one-sided view of things.

Worse still, it is anybody’s guess why the police has not acted much, though the first week of violence and arson is already over. It’s a critical period for the police and other government agencies to collect material evidence from each of these crime scenes, starting with ‘GotaGo Gama’, where the mindless attackers became the victims.

As Live video-footage showed, for instance, the crowd that heard Mahinda in ‘Temple Trees’ was not seen as hiding weapons unless they were ‘professionals’ (which possibly at least some of them were). Again, on Live TV news and social media posts, they were seen carrying clubs and iron rods with which they hit the peaceful protestors.

Where and how they got the weapons? If it is outside ‘Temple Trees’, as is rightfully presumed, was there not high-security there with enough and more police personnel and intelligence officials in civvies? Should they be questioned? Should they be charged for the offence, ‘accessories before the act’?

Likewise, it was seen that sooner than later, the victims hit back at the protestors, again with sticks and rods (?) Where the rioters’ overwhelmed by the victim-crowd, from among whom, some picked up the weapons in the others’ hands and hit them, or, were they too hiding sticks and clubs on their person? Again, the police seems to have not done anything about it – or, have not talked about it or moved the court with any information for the world to know.

It does not stop here. More curious than all this is the way arsonists (?) supposedly set fire to 75 homes, vehicles and other property belonging to ruling party politicians, starting with President Rajapaksa’s ‘ancestral home’, which is (was) also the ancestral home of other Rajapaksas, until now ministers, including ex-PM Mahinda.  It is anybody’s guess who posted those videos on the social media, which is not a difficult thing for the cyber-crime cops to find out, but the absence of any person, leave aside mobs on any of these sites causes eyebrows to raise, wide and big.

If the absence of news reports is to be taken as the bench-mark and base, not one human being, animal or other living being seems to have been killed, or even injured in any of these sites. Does it mean that after early protestors had surrounded ruling MPs’ houses, to force them to quit even a month earlier, all parliamentarians had shifted their family members and even pet animals and milch cows, if any, to safety? Improbable, but not impossible.

The unsaid but implied conclusion is that the owners of these home had them set ablaze. If so, to what end? To purchase unavailable public sympathy in the neighbourhood, and also claim insurance (assuming that all those properties were insured for huge sums)? Does the list then include the Rajapaksas’ ancestral home? Even then, it is unnatural for the local people to crowd around, both to quench their own curiosity, or to take selfies or visuals on their cell-phones, or with the idea of recapping those scenes to their grandchildren years later.

The greater possibility would have been for the neighbours to crowd around, to ensure that the fire did not spread – or, do whatever is required to ensure as much. None of these things seemed to have happened. Nor has any visual or reports spoken about the Fire Service and the police, not necessarily in that order, being alerted, rushing to the respective sites, and trying to put out the blaze.

Going by the nation’s past and forgettable experience, some mobs, in typical filmi fashion, could have asked the inmates of those homes to vacate, force neighbours to stay away, their doors and widows shut, and set fire to the house, possibly after dousing it in petrol or kerosene. This seems to be the most ‘doable’ thing in these cases, unless the police investigations prove otherwise.

Such being the suspicion, were they just enraged civil society activists at the local level, or professional mobs bent on looting those homes and attribute it to faceless others, of political/ideological groups that have been lying low and in hiding for some time now? Any or all of these possibilities sound possible/probable, unless eliminated by investigators, one incident after another, based on one piece of evidence/witness after another.

All in a day’s work?

Worse than all these is the until-now unexplained death of ruling SLPP parliamentarian, himself an alleged rioter. There is no known mention of his family’s loss and bereavement, fellow-MPs, starting from the ruling SLPP to which he belonged, seems to be looking only at the one who would now fill his place – and on his successor. The question is if the replacement member would take office in time for the Deputy Speaker’s election when Parliament reconvenes on Tuesday, 17 May – and hence for the no-trust motion vote against President Gota.

For Amnesty, Human Rights Watch and the nation’s Human Rights Commission, Amarakeerthi Atukorake never seemed to have bene born, for them to worry about. At least Parliament Speaker, Mahinda Yapa Abeywardena, promised to take up the MP’s death with the police – but three days after the incident. It was possible that the Speaker was expecting the police to initiate investigations and also report to him. That did not seem to have happened.

Initial reports in a section of the media – and almost all across the social media – claimed that the MP had shot himself when irate protestors cornered him in his vehicle along with his ‘private’ (?) security guard. The focus then was on the MP reportedly whipping up a pistol/revolver, threatening to shoot at the crowd. Now, sketchy news reports of his post mortem examination quote police that he was beaten to death.

At least the news reports do not refer to a bullet wound which would have been on his body if he had shot himself as reported soon after the event. One only hopes that fresh reports do not emerge now, claiming that Atukorake beat himself so very severely that he broke his bones in multiple faces and died. Still there is nothing to support or contradict early reports that his security too committed suicide by hanging from the ceiling of a warehouse or some such place.

The way the nation has treated all these, whether the pro-Mahinda riots or the anti-Rajapaksa arson, on 9 May, the simple conclusion is that the law-and-order situation had virtually broken down at least until then. It spoke of non-existence of governance of any kind, and the Opposition and the anti-Rajapaksa media is not saying a thing about it, lest they should refer to the unprecedented incidence of arson, which, to them, did not happen. For them all, it’s all in a day’s work. Or, so it seems.

At least twice in the past weeks, Defence Secretary, Kamal Gunaratne (retd) and Army commander, Gen Shavendra Silva (retd), sought to reassure the public that they had nothing to fear on the law-and-order and personal security fronts. Less said about Inspector-General C D Wickremaratne the better. He did not seem to have promised anything to anyone in matters of upholding public peace and order. Hence you cannot hold him responsible just as you could not do it in the case of one of his predecessors, Pujith Jayasundara viz ‘Easter serial-blasts’, 2019.

All of it means only one thing. Mr Arsonist or Messrs Arsonists would have to themselves show up before the nearest police station, beat or traffic constable or a court (if he is intelligent and has money to pay a lawyer) without waiting for the police to trace and track him down. That way, one week after the riots and arson, the police does not seem to have picked up even one of the pro-Mahinda rioters, who were all identified by TV and social media video footage (even assuming that the cop-house did not deploy their videographers).

That is after some of the 50-odd prisoners who escaped while being transported in riot-torn Colombo city have reported back to the prison, while for the return of the rest, the authorities have appealed to their good senses. No one is venturing that these ‘escapee prisoners’ have left the nation already, but the same cannot be said of the rioters whom the whole nation has seen on TV screens then and there – and against whom no court has ordered any travel-ban, as applicable to Mahinda, Namal and 15 others!