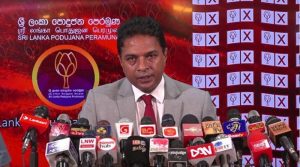 SLPP General Secretary Sagara Kariyawasam said that the party will support the Government to be formed under Prime Minister Ranil Wickremesinghe while protecting the independence of their party.

The SLPP has already begun to work with the new Prime Minister to address the current crisis in the country.

An emergency meeting was held today with the attendance of former Ministers Kanchana Wijesekara and Susil Premajayantha along with former Minister Sagala Ratnayake and senior officials from the Ministry of Energy and Ministry of Petroleum Resources.

Discussions focused on the prevailing energy crisis in the country and the measures that can be taken to ease the burden on the public. (Colombo Gazette)