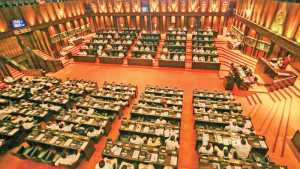 Parliament is to convene on 17th May as decided earlier, following the appointment of a new Prime Minister.

Political party leaders reached the agreement on the date to convene Parliament, at a meeting with Speaker Mahinda Yapa Abeywardena today.

It was decided to convene Parliament on 17th May, as was previously decided and not earlier.

It was also decided to debate a motion expressing displeasure against the President, after obtaining the approval of Parliament.

There were calls earlier to convene Parliament this week to discuss the crisis in the country. (Colombo Gazette)