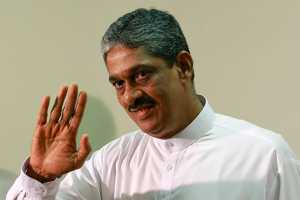 Fonseka said that he will not accept any post in a Government headed by President Gotabaya Rajapaksa.

He said that he stands with the demand of the public who are pushing for the resignation of the President.

Fonseka said that he also supports the ongoing struggle at Galle Face.

There were reports that Fonseka had been offered the Prime Minister post by President Gotabaya Rajapaksa. (Colombo Gazette)