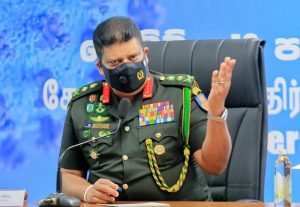 The Army has denied claims it plans to provoke and then shoot at the general public.

Chief of Defence Staff and Commander of the Army General Shavendra Silva rejected claims made by Duminda Nagamuwa of the Frontline Socialist Party saying that the armed forces are poised to shoot at the general public after provoking them.

General Shavendra Silva insisted that members of the armed forces would not resort to such disgraceful acts, under any circumstances.

The military has been ordered to shoot anyone looting public property or causing harm to individuals.

Issuing a brief statement, the Defence Ministry had said that the tri-forces have been ordered to shoot anyone looting or destroying public property.

The order was issued after mobs continued to attack and destroy public property in several parts of the country.

A number of houses owned by ruling party politicians have been damaged and set on fire while Government supporters have also been attacked over the past two days. (Colombo Gazette)